SINGERS and PLAYERS of INSTRUMENT 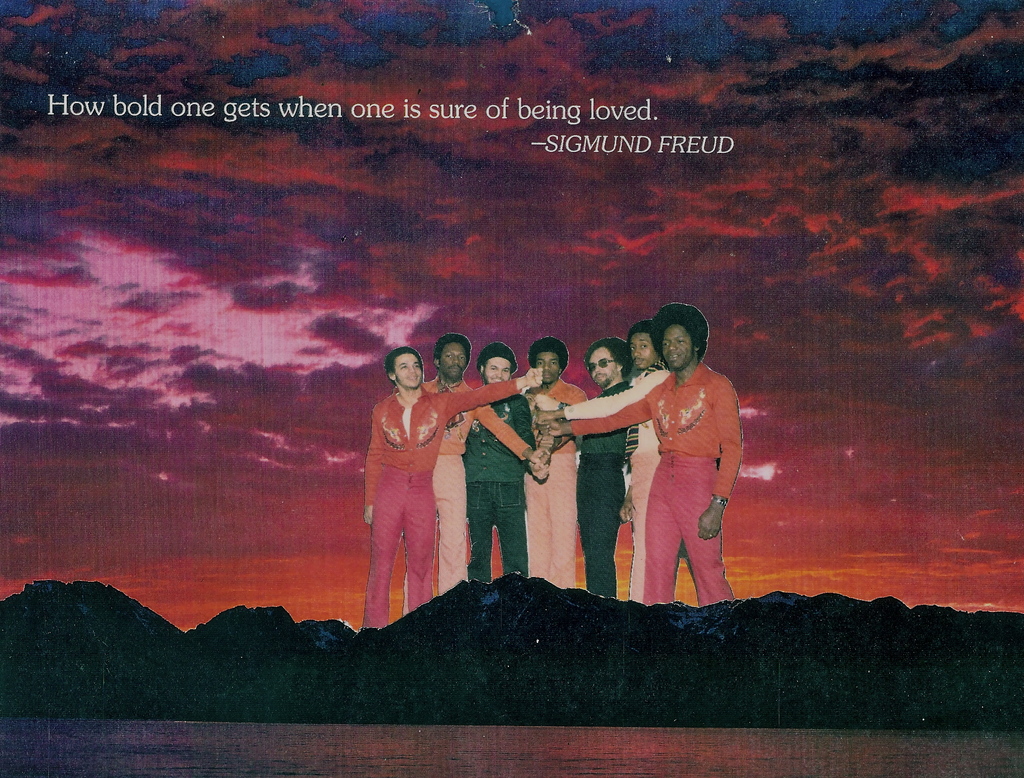 This is the “I-Pro-Farmers Band”; we are 7 Spirit of professional Farmers revealed in the 7th Chap. of “Revelation

This picture was taken in the 70s in the basement of the drummer parent house, which was located at “144- St”. and “Farmers Blvd”. in Queens New York.

It is in the 7th Chapter of Revelation that the 144-000 is sent to feed the Hungry and “Liberate” them from Poverty.

Revelation 7:1 And after these things I saw Four Angels standing on the Four Corners of the Earth, holding the four Winds of the Earth, that the wind should not blow on the Earth, nor on the Sea, nor on any Tree.

7:2 And I saw another angel ascending from the East, having the 7 Seal of the Living God: and he cried with a loud voice to the four Angels, to whom it was given to hurt the Earth and the Sea, 7:3 Saying, hurt not the Earth, neither the Sea, nor the Trees, till we have Sealed the Servants of our God in their Foreheads.

7:4 And I heard the number of them that were sealed: and there were sealed an hundred and forty and four thousand (144-000) of all the Tribes of the Children of Israel.

7:9 After this I beheld, and, lo, a great Multitude, which no man could number, of all Nations, and Kindred, and People, and tongues, stood before the Throne, and before the Lamb, clothed with white robes, and palms in their hands; 7:10 And cried with a loud voice, saying, Salvation to our God which sit upon the Throne, and unto the Lamb.

7:11 And all the Angels stood round about the Throne, and about the Elders and the four beasts, and fell before the throne on their faces, and worshipped God, 7:12 Saying, Amen: Blessing, and Glory, and Wisdom, and Thanksgiving, and Honor, and Power, and Might, be unto our God for Ever and Ever. Amen.

7:13 And one of the Elders answered, saying unto me, who are these that are arrayed in white robes? And whence came they? 7:14 And I said unto him, Sir, do you know. And he said to me, these are they that came out of Great Tribulation, and have washed their robes, and made them white in the Blood of the Lamb.

7:15 Therefore are they before the throne of God, and serve him Day and Night in his Temple: and he that sits on the Throne shall dwell among them. 7:16 They shall Hunger no more, neither Thirst any more; neither shall the Sun light on them, nor any Heat.

7:17 For the Lamb which is in the midst of the throne shall feed them, and shall lead them unto living fountains of waters: and God shall wipe away all tears from their eyes.

The I-Pro-Farmers were amongst the first live bands to rise up in New York where people had only heard the music of the Caribbean through Radio and Stereo.

We were the only Band to rise up out of Queens at the time, and the first Reggae Band to play in the Labour Day Parade that was sponsored by Chin Randy or VP Records.

We later went from being 7 Spirit to 8, when we added a Sister to the Group “Sharon Black”.

We also had the pleasure of having two founding Fathers of the Music join us; Roland Alphanso of the original “Skalalites” and Papa Roy, the father of Rita Marley.

At the height of our achievement I was called to take another step and it became the step of sacrifice of which I will speak on in another Blog. This is (symbolically) the Stone that Daniel spoke of that will bring “Liberation” to the People and “Feed” the Hungry of the Earth. This Stone can be found at Liberty Ave, and Farmers Blvd.

Daniel 2:20 Daniel answered and said, Blessed be the name of God the Creator for ever and ever: for Wisdom and Might are his: 2:21 And he change the Times and the Seasons: He remove kings, and set up Kings: he give Wisdom unto the Wise, and Knowledge to them that have Over-standing:

2:22 He reveal the Deep and secret things: he knows what is in the Darkness, and the Light dwells within Him.

2:23 I thank thee, and praise thee, O thou God of my Fathers, who has given me Wisdom and Might, and has made known unto me now what we desired of thee: for thou hast now made known unto us the king's matter.

2:30 But as for me, this secret is not revealed to me for any wisdom that I have more than any living, but for their (Israel) sake that shall make known the interpretation to the king, and that thou might know the thoughts of thy heart.

2:31 Thou, O king, saw, and behold a great Image (Liberty). This great image, whose brightness was excellent, stood before thee; and the form thereof was Terrible.

2:32 This image's head was of fine gold, his breast and his arms of silver, his belly and his thighs of brass, 2:33 His legs of iron, his feet part of iron and part of clay. (symbolically)

2:34 Thou saw till that a Stone was cut out without hands, which smote the Image upon her feet that were of iron and clay, and break them to pieces.

2:35 Then was the iron, the clay, the brass, the silver, and the gold, broken to pieces together, and became like the chaff of the summer threshing floors; and the wind carried them away, that no place was found for them: and the Stone that smote the Image became a Great Mountain (Zion), and filled the Whole Earth.

It is I the professional Farmer who was called upon to make the ultimate sacrifice that will bring true Liberty, a sacrifice that offended many who should not have been offended.

The 12 Tribes of Israel that also have their headquarters on Farmers Blvd did not defend I  when I first made my stand against the Great Whore of Babylon but become my enemy.

What I say is for those that live amongst the resurrected. In other words I speak the Language of the Spirit that is above the Grave (over-standing)

Those that still live in the Grave are still offended by this Language. Even though they speak of humility they themselves have never become humble, so they remain in the darkness that overcame Samson, and in their darkness they believe that they are in the Light.

8:7 Because the carnal mind is enmity against God the Creator: for it is not subject to the Law of God, neither indeed can be. 8:8 So then they that are in the flesh cannot please God the Creator.