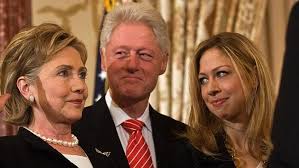 Everything Bill and Hillary touch ends up in a police report. The list of New York’s legendary crime families — the Bonannos, Colombos, Gambinos, Genoveses, and Luccheses — requires this addition: The Clintons. Hardly a day passes without Hillary, Bill, or one of their gang landing in hot water. The Clintons’ inner circle teems with people embroiled in scandal, under investigation, or heading into or out of jail. In a report that surfaced Wednesday, the State Department inspector general pulverized Hillary’s claims that her outlaw e-mail server was perfectly legal. The report said that Hillary “did not comply with the Department’s policies that were implemented in accordance with the Federal Records Act.” When staffers warned that her private server was vulnerable to hackers, they were ordered “never to speak of the Secretary’s personal e-mail system again.” Indeed, in a January 9, 2011, e-mail, technology aide Bryan Pagliano wrote, “We were attacked again so I shut [the server] down for a few min.” And when then–deputy chief of staff Huma Abedin suggested that Hillary use government e-mail, she chose personal secrecy over national security: “I don’t want the personal being accessible.” Earlier in this fiasco, Hillary said, “I’m more than ready to talk to anybody, anytime. And I’ve encouraged all of [my staffers] to be very forthcoming.” Those were mere words. In fact, the report states, “Secretary Clinton declined OIG’s request for an interview,” as did Abedin, then–chief of staff Cheryl Mills, former deputy chief of staff Jake Sullivan, and four others who served Hillary at State. RELATED: Hillary’s Sad Promise: Bill Is Her Talisman That Will Magically ‘Revitalize the Economy’ Meanwhile, as many as 49 FBI agents are exploring the criminality and possible intelligence damage wrought by Clinton’s Chappaqua server and the 2,115 classified e-mails it contained. According to Forbes, the Clintons went from — as Hillary put it — “dead broke” in early 2001 to earning $230 million through 2014. This happened while she made between $145,100 and $174,000 annually as a U.S. senator from 2001 to 2009 and $186,600 as secretary of state through 2013. What’s the Clintons’ secret? They seemingly wrap their fingers in fly paper — to grab as many Benjamins as possible. While Hillary was at State, Bill was a speech-making machine. He charged up to $750,000 per appearance, often paid by Ericsson, TD Bank, the United Arab Emirates, and other entities with business before the State Department. After Hillary left office, she cashed in, too. As journalist Michael Walsh detailed in the May 22 New York Post, Hillary racked up $21.6 million in lecture fees between 2013 and 2015, usually at $225,000 each. Cynics might call these down payments for future services rendered, if she were to win the White House.Meanwhile, Bill has survived House impeachment, Senate acquittal, and subsequent disbarment. He credibly has been accused of sexual assault by former White House volunteer Kathleen Willey. He paid $850,000 to settle former Arkansas state employee Paula Jones’s sexual harassment suit. And former Arkansas nursing-home manager Juanita Broaddrick very believably says that then–gubernatorial candidate Clinton raped her in 1978. The suspected sex crimes continue. The Clintons seemingly wrap their fingers in fly paper — to grab as many Benjamins as possible. As Fox News’s Malia Zimmerman reported on May 13, Bill Clinton traveled at least 26 times aboard The Lolita Express, a 727 owned by convicted pedophile Jeffrey Epstein. Nicknamed after Vladimir Nabokov’s novel about man–girl love, the airplane reportedly features an oversized bed on which passengers had group sex with female teenagers. Flight logs filed with the FAA show Bill and Epstein’s other guests jetting to the Azores, Brunei, Hong Kong, and other destinations. On at least five such excursions, Bill evidently dismissed his Secret Service detail. Epstein, whose 72-acre Caribbean retreat is dubbed Orgy Island, spent 13 months in prison and house arrest for procuring minors for prostitution. The FBI and the Justice Department’s Public Integrity Division are probing Governor Terry McAuliffe (D., Va.) for possibly taking illegal campaign donations from Chinese businessman Wang Wenliang, CNN revealed on Tuesday. McAuliffe co-chaired Bill’s 1996 reelection campaign and chaired Hillary’s 2008 presidential bid. Wang reportedly gave $120,000 to McAuliffe’s gubernatorial campaign and $2 million to the Clinton Foundation. According to Time, Wang met Hillary at a 2013 fundraiser in her Washington, D.C., home. RELATED: Yes, Hillary Was an Enabler Mayor Bill de Blasio (D., N.Y.), Hillary’s senatorial campaign manager, is under FBI investigation for possible pay-to-play fundraising among a variety of moneyed interests. At least four major donors to and a trustee of the Clinton Foundation have been convicted and even jailed for conspiracy, fraud, money laundering, witness tampering, and other felonies. And don’t forget Ed Mezvinsky, Chelsea Clinton’s father-in-law. He spent five years in federal prison for running a $10 million Ponzi scheme. MORE HILLARY CLINTON WOULD THOMAS MORE HAVE VOTED FOR DONALD TRUMP? WHY BOTH CLINTONS ARE SUCH UNAPOLOGETIC LIARS IF CLINTON IMPLODES, DEMOCRATS MAY TURN TO BIDEN AND WARREN How do these people get away with this? When it comes to the Clintons, the snarling watchdogs of the media — whose freedom to scrutinize the powerful was enshrined in the First Amendment by the Founding Fathers — are as menacing as a backyard full of puppies. They say that criminals always return to the scene of the crime. Voters must decide if they will send the Clinton crime family back to 1600 Pennsylvania Avenue.