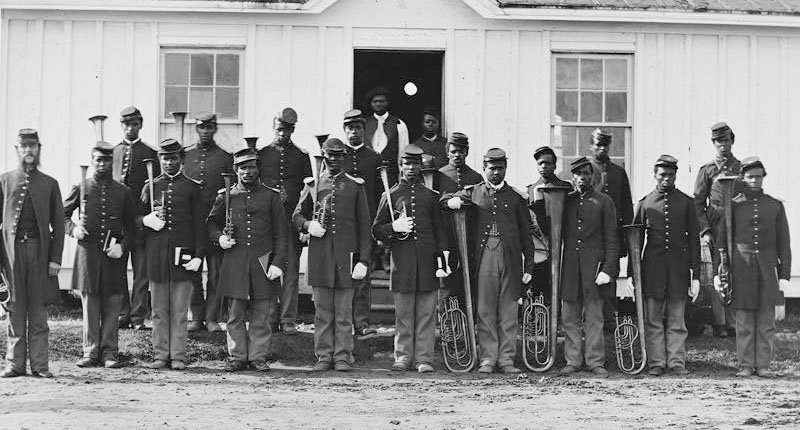 Union General John Logan is often credited with founding Memorial Day. The commander-in-chief of a Union veterans’ organization called the Grand Army of the Republic, Logan issued a decree establishing what was then named “Decoration Day” on May 5, 1868, declaring it “designated for the purpose of strewing with flowers or otherwise decorating the graves of comrades who died in defense of their country during the late rebellion, and whose bodies now lie in almost every city, village, and hamlet churchyard in the land.”

Today, cities across the North and South claim credit for establishing the first Decoration Day—from Macon, Georgia to Richmond, Virginia to Carbondale, Illinois. Yet, a key story of the holiday has been nearly erased from public memory and most official accounts, including that offered by the the Department of Veterans Affairs.

During the spring of 1865, African-Americans in Charleston, South Carolina—most of them former slaves—held a series of memorials and rituals to honor unnamed fallen Union soldiers and boldly celebrate the struggle against slavery. One of the largest such events took place on May first of that year but had been largely forgotten until David Blight, a history professor at Yale University, found records at a Harvard archive. In a New York Times article published in 2011, Blight described the scene. While it is difficult to pinpoint the precise birthplace of the holiday, it is fair to say that ceremonies like the following are largely erased from the American narrative of Memorial Day.

During the final year of the war, the Confederates had converted the city’s Washington Race Course and Jockey Club into an outdoor prison. Union captives were kept in horrible conditions in the interior of the track; at least 257 died of disease and were hastily buried in a mass grave behind the grandstand.

After the Confederate evacuation of Charleston black workmen went to the site, reburied the Union dead properly, and built a high fence around the cemetery. They whitewashed the fence and built an archway over an entrance on which they inscribed the words, “Martyrs of the Race Course.”

The symbolic power of this Low Country planter aristocracy’s bastion was not lost on the freedpeople, who then, in cooperation with white missionaries and teachers, staged a parade of 10,000 on the track. A New York Tribune correspondent witnessed the event, describing “a procession of friends and mourners as South Carolina and the United States never saw before.”

The procession was led by 3,000 black schoolchildren carrying armloads of roses and singing the Union marching song “John Brown’s Body.” Several hundred black women followed with baskets of flowers, wreaths and crosses. Then came black men marching in cadence, followed by contingents of Union infantrymen. Within the cemetery enclosure a black children’s choir sang “We’ll Rally Around the Flag,” the “Star-Spangled Banner” and spirituals before a series of black ministers read from the Bible.

After the dedication the crowd dispersed into the infield and did what many of us do on Memorial Day: enjoyed picnics, listened to speeches and watched soldiers drill. Among the full brigade of Union infantrymen participating were the famous 54th Massachusetts and the 34th and 104th United States Colored Troops, who performed a special double-columned march around the gravesite.

This story of Memorial Day, also reported by Victoria M. Massie of Vox, was not merely excluded from the history books but appears to have been actively suppressed. The park where the race course prison camp once stood was eventually named Hampton Park after the Confederate General Wade Hampton who became South Carolina’s governor following the civil war.

In 1966, former President Lyndon B. Johnson declared Waterloo, New York to be the official birthplace of Memorial Day. Then, in 1971, Congress established “Memorial Day” as an official federal holiday to honor all Americans who have fallen in U.S. Wars. In an article published in 2013 on Snopes.com, writer David Mikkelson used these official declarations, as well as the decree issued by Logan, to bolster his argument that African-Americans in Charleston probably should not be credited for establishing the holiday. He further noted that numerous other towns and cities claim to have created the first ceremonies. Yet, Mikkelson’s reasoning fails to account for the systematic and proven appropriation, erasure and distortion of African-American history by presidents, lawmakers, generals and scholars alike. The fact that the role of African-Americans is missing from the official record is precisely the problem. At the very least, the contribution of Black people in Charleston has been erased from the public narrative of Memorial Day and deserves to be recognized.

World War II veteran Howard Zinn argued in 1976 that the holiday has since become an uncritical celebration of war-making. “Memorial Day should be a day for putting flowers on graves and planting trees,” he wrote. “Also, for destroying the weapons of death that endanger us more than they protect us, that waste our resources and threaten our children and grandchildren.”

Yet Memorial Day has other troubling modern-day manifestations. Today, while confederate symbols across the United States are increasingly rejected as racist, civil war reenactors still gather in Charleston for a public ceremony, held shortly after Memorial Day, to honor the confederacy on the anniversary of General Stonewall Jackson’s death in 1863. The ceremony is slated to take place next weekend, even after last summer’s white supremacist massacre at Charleston’s Emanuel African Methodist Episcopal Church, in nine African-Americans were slaughtered.

Charleston officials have taken some small steps towards recognizing the city’s African-American history. Following a community campaign, the city of Charleston finally held its first formal commemoration of the African-American roots of Memorial Day in 2010, and the following year it established a plaque. Yet, the history of former slaves’ efforts to give the union dead a proper burial is missing from the park’s official history, made available online by the Parks Conservancy.

Dot Scott, president of the Charleston branch of the NAACP, told AlterNet, “Many of the issues we have around race are based on the fact that these stories have not been told. It sends the message that the contributions of African-Americans are not valued and respected.”