In a turn some may find ironic, Donald Trump’s team has kicked off an election season effort called “Black Voices for Trump,” — in the Black cultural magnet city of Atlanta.

According to The Washington Post, on Friday, the campaign launched the “Black Voices for Trump” initiative, directing efforts toward recruiting African American Trump supporters, which kicked off with an elite, invitation-only event with a crowd of mostly Black conservatives, some of whom wore “Black Lives MAGA” hats.

Amongst the hundreds in attendance were former presidential hopeful Herman Cain,  Martin Luther King, Jr.’s niece Alveda King and former state legislator Melvin Everson.  After boasting about the economic gains and criminal justice reform that’s taken place under his administration, Trump mused about how the Democratic party is a bad habit that Black Americans need to free themselves from.

“To keep America great, we need all of you to lend your voice,” Vice President Mike Pence chimed in at one point. “African Americans and every American need four more years of President Donald Trump in the White House.”

Before launching the new effort, Trump met with supporters at a fundraiser that was expected to raise about $3.5 million for a joint committee benefiting the Republican National Committee, the Trump campaign and the campaign of Sen. David Perdue, R-Ga. Nearby, a small group of protesters chanted, “Lock him up!”

In 2016, six percent of Black voters supported Trump, according to a Pew Research Center analysis of people who participated in its polls and were confirmed to have voted. There is no indication his support is growing. Polling shows that African Americans continue to be overwhelmingly negative in their assessments of the president’s performance, with his approval hovering around 1 in 10 over the course of his presidency, according to Gallup.

Yet Trump’s campaign dismissed the numbers, insisting the campaign has seen favorable movement and arguing the president can increase his margins with black voters by bringing new people into the fold.

“The polls have never been favorable for Trump, and the only poll that matters is on Election Day,” said senior campaign adviser Katrina Pierson.

The campaign has launched similar coalitions for women, Latinos, and veterans.

“It takes a lot of courage to say you’re supporting Trump,” Urban Development Secretary Ben Carson told the crowd. “Today, they say if you are a conservative, you’re somehow an Uncle Tom, you’re a horrible person, a demon. What a bunch of crap.”

These are some of the great @realDonaldTrump supporters that the media does not want you to know about. Proud to join @POTUS and so many folks at the Black Voices for Trump coalition today in Atlanta. #KAG 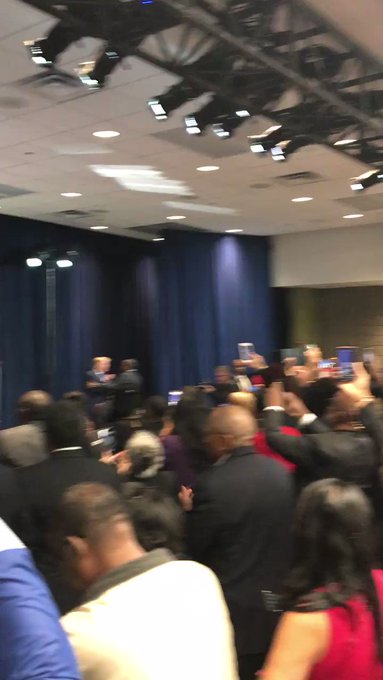 5,855 people are talking about this

“We need you to reach out to your friends, your neighbors, your churches,” Trump said. “We’re going to campaign for every last African American vote in 2020…We’re going to make 2020 a year of change in Black communities all across the country.” 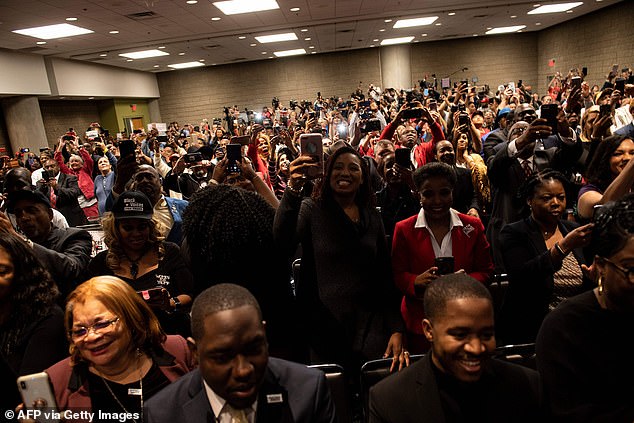 President Trump made a pledge to black supporters in Atlanta Friday that the 'best is yet to come' if they stuck by his side through the next election cycle.

'The betrayal of the black community is unbelievable,' Trump said. 'You have the worst schools than anybody in the country by far.'

He went as far to say that Democrat prioritized undocumented immigrants over black citizens, who have long been a dependable Democratic voting bloc.

'Democrats care more about illegal aliens than African-American citizens, or our military, or citizens all over the place,' Trump said. 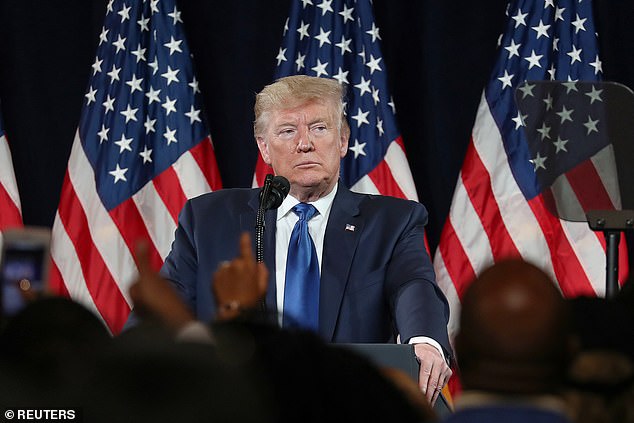 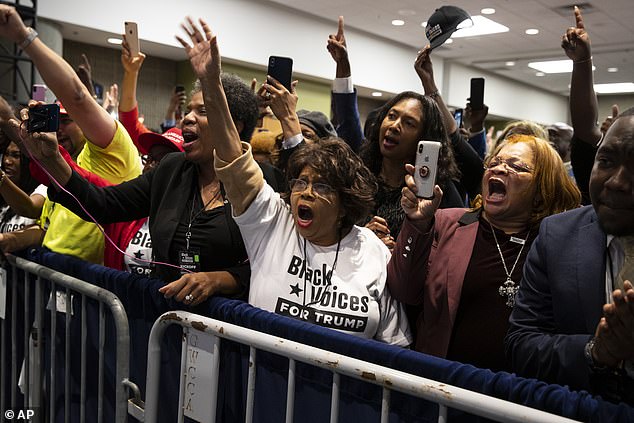 A crowd cheers for President Trump as he speaks Friday in Atlanta, Georgia at a 'Black Voices for Trump' event, which is part of his 2020 re-election effort

Trump's speech was billed as a 'Black Voices for Trump' kick-off event through his 2020 re-election campaign.

'Today they say if you are a conservative you're somehow an Uncle Tom, you're a horrible person,' Carson told the crowd. 'What a bunch of crap,' the mild-mannered ex-brain surgeon added.

'I only care about what God thinks,' Carson said.

Trump started his own speech by asking how to best identify the group.

'What do you prefer - "Blacks for Trump" or "African-Americans for Trump?"' the president asked the audience. A loud 'Blacks for Trump' cheer started in response, so Trump sort of stuck with that. 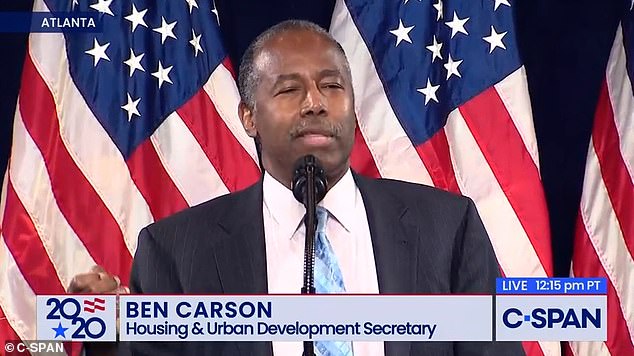 HUD Secretary Ben Carson was an opening act for President Trump, telling the crowd he's no 'Uncle Tom' for being a black conservative

He also tickled the crowd by commenting on his shoot-from-the-hip speaking style.

Most of the meat of the speech was the president's usual boasts, though he made the point - as he did during the 2016 cycle as well - that black voters really have nothing to lose.

'It's amazing that you've stayed so long to be honest,' he said, commenting on the high number of African-Americans who vote Democratic.

In 2016, Hillary Clinton won 88 percent of the black vote, while Trump got just 8 percent.

'And ladies and gentleman of the African-American community, I just want to tell you really, really strongly, the best is yet to come,' Trump vowed as he wrapped up his remarks.

He said that next time he'd hold a Blacks for Trump event in a bigger room, commenting on how they needed overflow.

A spokesperson for the campaign has yet to respond to a request for comment on attendance numbers.

'What has happened in the last three years for the black community, the African-American community has been really incredible and it is my honor to have been there with you,' the president said.

Also on Friday, Trump launched what he's dubbing the #MAGAChallenge on Twitter, which is geared to black and young voters.

The president linked to a popular music video from supporter Bryson Gray, who calls himself 'MAGA Boy.' In the video, Gray raps in a giant 'Make America Great Again' hat about how he was told he shouldn't support Trump because he's black.

'I will be announcing the winners of the #MAGAChallenge and inviting them to the White House to meet with me and perform,' Trump tweeted. 'Good luck!'

This President Doesn't hide his racist attitudes. I guess the house niggers will always be brought for a few dollars...

Comment by vaughn mitchell on November 12, 2019 at 2:19pm
@ jessy, I hope black lives matter Maga, do cone to new York, so they can booed at, and get laughed at. I thought aliens, came from another planet, lol. Democrats, care more for illegal people coming into this country than African Americans. Let me see African Americans are already citizens, they have alot more than foreigners coming into this country illegally. Nothing is free in this country, not even water. So are you going to tell me that Republicans, alot of them care for black people? Your Racist President call Africa, s*** hole countries, disrespect Baltimore, when his son in law own some of the buildings ripping off blacks, as for black people getting shot by the cops, and white people calling the cops on black people who are minding their business, I guess that's the Dems, fault.

I hope Black Lives MAGA do come to New York so I can attend.

I also feel the Democrats care more about illegal aliens than they care about African-Americans!  They want open borders!  What kind of crap is that?  I don't want open boarders!!   The Democrats are upset that children who are illegal aliens are in cages!  I don't agree children should be in cages either!  I think they should be let out on a bus back into their original country of origin.

Mayor DiBlasio wants to give free health care to illegal immigrants?  Hellooo, what about US??   We can't get free health care!  These out-of-pocket co-payments some of us have to pay is too much!

Since these Democrats like Elizabeth Warren want open borders and seem to care more about illegal aliens than us, they certainly won't get my vote!!

Comment by vaughn mitchell on November 8, 2019 at 8:40pm
As soon as they leave the cops will pull them over, and start shooting them. Blacks do have the worst schools thanks to Betty Devos. They pour money into the white schools, and let the black schools suffer. I wonder why Atlanta, have is #1 in hiv, in the country. The previous governor took the money and use it for other things than fighting hiv. That's the south for you, they getting schooled by Don the con. Come to New York with thar bullshit and they boo the he'll out of him.