‘That’s What Animals Do’: Ben Carson Calls Fight for Racial Equity ‘Another Kind of Racism’ (Watch) 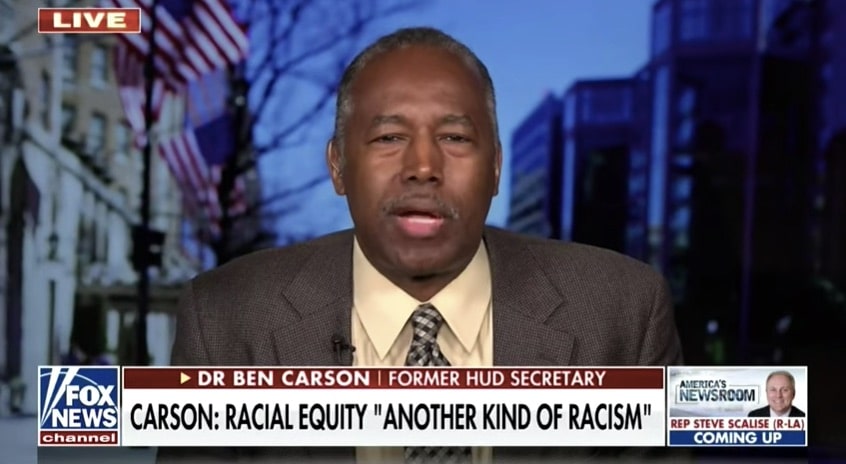 After being annihilated on Twitter for calling racial equity “another kind of racism” in an op-ed for The Washington Post, Ben Carson ran to Fox News Wednesday to defend his rationale, even dragging Dr. Martin Luther King into his explanation

Appearing on Fox News’s “America’s Newsroom,” the former HUD secretary under President Trump discussed his WaPo op-ed, titled, “Moving our focus from equality to equity won’t defeat racism. It’s another kind of racism.” He wrote in the piece: Proponents of equity see no problem with treating groups of people differently based solely on race, as long as it serves their agenda. This is what we used to call racism, and those not blinded by identity politics still recognize it as such.”

Carson uttered: “Dr. Martin Luther King, Jr. spent a lot of time trying to get people to not look at external characteristics which they cannot change, in which they cannot help, and instead to look at the things that you can change and the things that you can help, such as your character. What kind of person are you? Shouldn’t we be paying more attention to that than to external characteristics?”

“You know, that’s what animals do, base a lot of what they do on external characteristics because they don’t have the mental capacity to dissect further into what’s really important,” Carson added. “We do. So let’s utilize that.”

Watch this bile being spewed below:

Comment by mr1stroke on April 24, 2021 at 12:22pm
Lol wow so he suppose to get shot by racist cops just because he uses tax payers money and niggers would celebrate, but i guess he is the only one using tax payers money, how come niggers never wish prison even for the white ones, he had no experience in housing well i guess we had to find out, how come niggers are not that mad when those white officials appoint their friends who have no experience in nothing like that pete f***** who is charge of transportation, how come noggers are not that mad at those white law makers who watched black people fall victims over and over and never changed the laws, i guess its easier to hate another person of color, and thats what we call niggers

Comment by vaughn mitchell on April 24, 2021 at 11:46am
Ben Carson, need to be pulled over by racist cops, and get shot in the back, and black people would celebrate. His ass did not have a problem him and his wife using tax payers money to buy expensive furniture for his office. The b**** have no experience being secretary of housing. F*** racist FOX, news.

Comment by mr1stroke on April 23, 2021 at 6:49am
Lol ok but let me ask, no intelligent person can be proud of a person because of his success, but yet because of his achievements and accomplishments, so the question would be what has he done for his community, what has they benefit from him, or they suppose to be proud of him just because he is successful? Please help us understand

I believe Ben Carson is a nuerosurgeon for children... So running the dept. of housing ain’t s***!

what is he bad for denying lazy mofo’s section 8?
f*** outta here!

This is a successful BLACK MAN that his community should be proud of, but because he’s a Christian he’s somehow “racist”??? Da FACK

Comment by mr1stroke on April 23, 2021 at 3:04am
I dont ever agree with that house negro, but how intelligent are you when you can glorify CNN as being legit to be in favor or racism, at CNN name any black executive, those white people on CNN are as racist as they come, the house negros on CNN are being slaves but chump change, how come CNN dont ever put true racism on blast instead they tell the negros what they want to hear, so stop supporting those who are not in black people's benefit

Comment by vaughn mitchell on April 22, 2021 at 11:22pm
This coming from the a******, whose wife was spending the public's money on expensive furniture, who has no qualification to be the secretary of housing. He runs to Racist Fox, news to back him up, like Fox, news is legit. LoL. Go, to CNN, he gets pimp slapped.