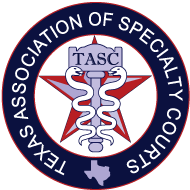 “Texas police officers and other first responders who have job-rela...

The first question everyone should be asking is, how many mentally ill police officers are there?

Texas House Bill 3391 “relates to the creation of a specialty court for certain public sa... (Click here to find out more.)

According to the Texas Legislature Online, not a single politician thought letting police officers avoid prosecution was a bad idea. Gov. Greg Abbott signed the bill in June, along with a handful of other bills that focused on helping police and first responders.

“A specialty court could have the unintended consequences that ther...

She’s right, this will have unintended consequences.

For years, states have used ‘specialty courts’ to deal with things like probation issues and drug treatment concerns. But creating a ‘first responder specialty court’ can and will be abused.

For a police officer to avoid prosecution, he or she will need to get their fellow officers to vouch that they need to be in the ‘safety treatment program’. And just like some perverted magic act, all of the officer’s problems will disappear.

“Proof of matters described by Subsection (a) may be submitted to the court in which the criminal case is pending in any form the court determines to be appropriate, including medical records or testimony or affidavits of other public safety employees.”

According to the Texas Tribune, judge Susan Brown said she is aware of one case that fits the criteria for the ‘first responder specialty courts’.

Police officers who’ve committed a crime will receive a get out of jail free card, simply by requesting a ‘first responder specialty court’ hearing and paying up to $1,0000 to enter into the ‘safety treatment program’.

Once a police officer has entered the ‘safety treatment program’ all charges against them will be dismissed.

“If a defendant successfully completes a public safety employee treatment court program, after notice to the attorney representing the state and a hearing in the public safety employees treatment court at which that court determines that a dismissal is in the best interest of justice, the court in which the criminal case is pending shall dismiss the case against the defendant.”

To summarize, all a police officer has to do is claim they suffered from a brain injury, mental illness, or mental disorder, including post-traumatic stress disorder while on duty and any crime they committed will be dismissed.

Do you think the public would ever be able to claim ‘post-traumatic police syndrome’ after being wrongfully arrested, beaten or targeted by the police?

Sadly, this isn’t the first instance of police avoiding watch lists or prosecution. Four months ago, I wrote a story revealing that it appears police are also exempt from being placed on watch lists.

“It is very telling” that a Hollywood police officer arrested for domestic violence in December “was not placed on the watch list and not sent the target letter. This is either evidence of favoritism and a double standard’…” Public Defender Howard Finkelstein said.

If you thought it was hard finding out if a police officer has ever had disciplinary problems, it is about to get a whole lot worse. Now courts can magically dismiss all charges against the officer and the public will never be the wiser.

To say that ‘specialty first responder courts’ are a bad idea would be an understatement. If anyone ever doubts that police are treated differently, just ask them to explain what’s happening in Texas.

This will be America's Reality, when things get really tight?

A lot of veterans from the Afghan and Iraqi wars will be our Police, and they have been desensitized to citizen/human liberties.

THEY are not hiding anything anymore, it is right in our faces and Americans are living in Denial, the Eighth Deadly Sin.

Comment by Andre marks on July 18, 2017 at 2:36pm
We need to stop voting for assess who when in office always have a tendency to forget that human being aren't third class citizens.

Comment by carolyn johnson on July 18, 2017 at 2:27pm
That's why went they kill cops I don't feel sad they want to kill that black child they want no Proof everything they said an done was unlawful they make their own laws they or killers killers of black people at first I said no but now all they do is kill black people going by their own rule