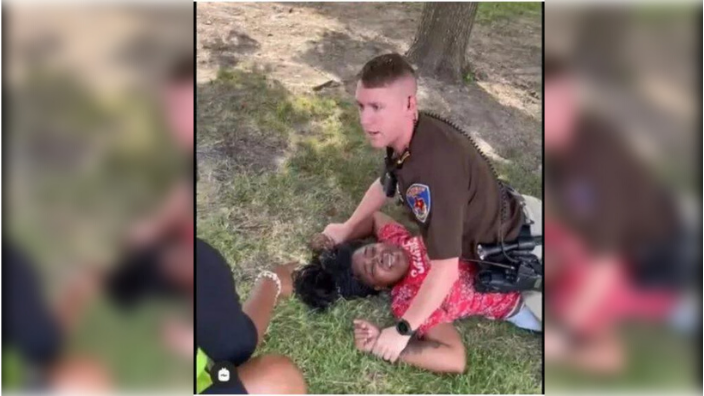 A Kaufman County deputy who was captured on camera brutalizing a teenage Black girl has been put on leave pending an investigation into the disturbing incident.

The video shows a white officer pinning 18-year-old Nekia Trigg to the ground after responding to a call that she was trying to jump in front of moving vehicles. The officer is seen on top of the teen with his legs wrapped around hers, as reported by ABC News 13. Foam appears to drip from Trigg’s mouth as she struggles for air after repeatedly claiming she can’t breathe.

According to family members, the incident took place near Trigg’s home, and she was allegedly able to call her brother before the confrontation turned violent. Family members rushed to the scene and found the officer on top of the girl on the ground in the front yard of a home.

Watch the two-part video below.

Antanique Ray, Trigg’s mother, is heard in the seven-minute video telling the deputy, whose name badge says ‘Martin,’ to get off her child.

Martin yelled at the woman, “Do not touch me! Back up! Back up!”

“Everything in me went numb,” Ray said at a press conference on Thursday.

Officials said deputies were called to Rambling Way in the Deerfield Heights development after “multiple calls about a female attempting suicide by jumping into oncoming traffic.”

The department released body camera footage on Thursday, showing an officer approaching Trigg as she’s crying and walking down the street. Her family said she had just left another family member’s home and was upset.

The officer asked “Where do you live?” and “Are you OK?”

Trigg attempts to walk away but the officer grabs her arm and prevents her from leaving.

“We got a call that you were jumping out in front of cars,” the deputy said.

The family claims that at some point during the encounter, Trigg was able to call her brother to tell him she was being accosted by the police. As Trigg continues to pull away from the deputy, his body camera falls, and a struggle between the two reportedly ensues.

When the family arrives at the scene, Trigg’s mother pleads with the deputy to stop.

“You can get up. You don’t have to do her like this,” a woman is heard in the video telling the deputy.

The teenager is then rolled over and handcuffed. As the police escort Trigg to a patrol car, an altercation erupts between Martin and Ray, resulting in her arrest. She was charged with assault on a public servant and interference with public duties and reportedly released on bond.

Trigg was transported to a mental health facility for evaluation, according to the Dallas Morning News.

Trigg’s sister reportedly posted the video and the footage immediately went viral. In a Facebook post, the Sheriff’s Office said the number of calls coming in about the incident was “unmanageable,” prompting the department to open an internal investigation.

Kim T. Cole, the family’s attorney, said they want the department to “examine their policies and to file charges against this officer.”

Trigg was “simply trying to get home,” she added. “I literally was in disbelief when I saw that police officer,” Ray said per the News.

“This maneuver is not something that American police are trained to do. But this officer saw fit to actually do it,” said Dominique Alexander, president of the social justice organization Next Generation Action Network.

“If he thought that Nekia was trying to harm herself, throwing her to the ground and sitting on her chest was not the way to fix that,” Cole said.

Teronica Williams, Ray’s cousin, said the deputy could have handled the situation better.

“Of course, me and our other family members are hurt this happened to her because we know what type of person she is,” she told the Dallas Morning News. “It takes one person to watch this video and devalue both her and Kia’s character and have the world thinking they deserve this and that — and that’s not fair.”

Williams disputes the officer’s claim that Trigg was jumping into traffic.

Ain't nothing going to happen to that cop. If they got calls the she was trying to jump in front of cars, then there were people out there trying to get her help. if she didn't corporate what is he supposed to do but restrain her. Did you see the way she was looking at every car that passed? Maybe she was looking for someone to help her. As far as the family is concerned, once that person is in cuffs, I don't suggest you interfere unless you want to be in cuffs too. I'm quite sure the girl is in a mental facility and she is getting help. I hope.

Is it who you vote for or a system that has been set up not to value you, they do it because they feel they can, or ask your self a common sense question, how come they don't just get up and do it to a white girl, especially a rich one? Oh that's right he knew what would happen, until you stand up against that system nothing will happen, no matter how much you rely and depend on white people to set you free, you got juneteenth as a holiday now they expect you to be quiet, so far you seem very happy to me, there will be more like that or even worse, the devil don't die, he waits to be reborn, white people will never changed

All he had to do was just say screw it, let her walk away.  If she wanted to run in front of cars as he claimed, which according to the video she doesn't appear to be suicidal, just let her go.  But no, he wants to be Officer Save a' Hoe.

Well he done f*cked up!  Some of these cops just don't have the god given common sense how to deal with people especially black people.

This child is clearly afraid of the police. He just should have walked with her home. And not do what he did. And then to straddled her the way he did, is equivalent to rape if not molestation. The way he questioned her was the way you speak to an adult. He expected adult answers and reactions and not from the mindset of a child. Her already emotional upset did not warrant the rationalization responses he wanted therefore he should be trained better. I hope that the family gets a good lawyer and immediate therapy for that little girl.

Comment by vaughn mitchell on August 1, 2021 at 1:05am
The rapist is getting his feel on with his legs between hers. He did not care if it was the wrong person as long as she is black, and he can't get sued.