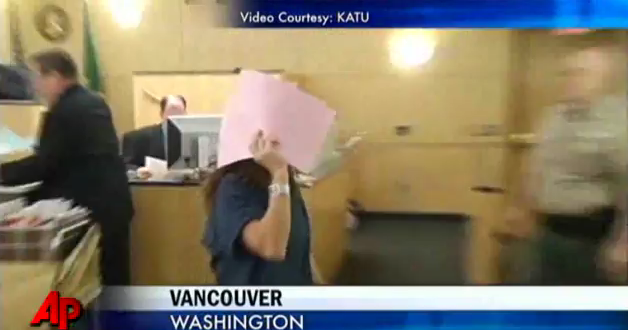 Police responded to a Vancouver Taco Bell Thursday evening after receiving a call from a patron at the restaurant who claimed a woman had tried to hawk her 3-day-old infant for the paltry sum of $500.

According to police, Heidi Lynn Knowles (née Heidi Gasaway) approached a female at the diner, handed her the infant and named her price. The woman, perhaps aware that any infant under $2,500 is bound to be a lemon, wisely declined Knowles’ pitch and called 911.

Deputies took written statements from the woman who called 911, from someone who had been with her, and from a Taco Bell employee — all corroborating the allegation that Knowles tried to sell the baby.

Knowles and the infant were soon found at a nearby motel. Though she denied trying to sell the child, police say she was “evasive” during questioning.

36-year-old Knowles was taken into custody and booked on charges of attempted baby selling – a Class C felony. She apparently had a s*** ton of outstanding warrants for previous charges that included bail jumping, theft and possession of drug paraphernalia.

One of the managers at the hotel where Knowles was staying with the child says she is surprised at the charges. After all, the infant appeared to be clean and when Knowles laid him down on the bed for a nap, “he was always safely far away from the edges.”

Another manager claims he spoke to Knowles’ father after she was arrested and learned that Knowles had apparently told her father she wanted to “sell [the baby] and leave. Go someplace else, start over.” Not on $500 chickie….

The infant, who was apparently in good health, is now in the custody of CPS.

Comment by Bombahdrop on July 20, 2011 at 7:58am
Some f****** plan she had just to start over did she stopp to think what she was doing wass not starting over but over when it was all said and done lol Another dumb ass chick for real so dumb my God.

Comment by BigginsMarie on July 19, 2011 at 11:13pm
What the hell is going on here? Criminals have gotten so retarded...good for us, because it makes them easy to catch...but still how you gonna do some dumb ish like that?