Terry Crews Claps Back At Gabrielle Union:  'There's Only One Woman On Earth I Have To Please, Her Name Is Rebecca' 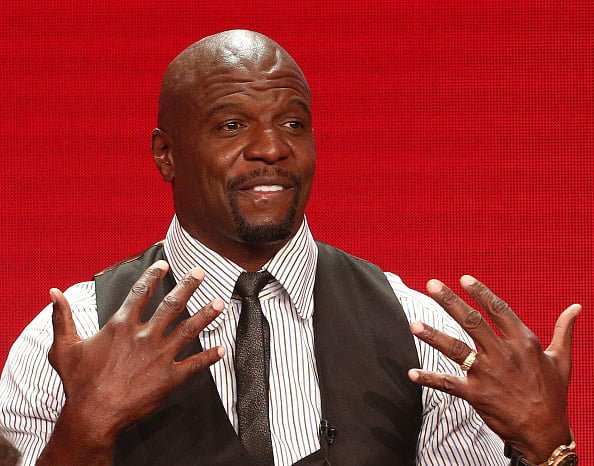 Actor Terry Crews of the television show "Brooklyn Nine-Nine" speaks during the NBC segment of the Television Critics Association Press Tour at the Beverly Hilton Hotel on August 8, 2018 in Beverly Hills, California.

The ongoing controversy surrounding actors Terry Crews and Gabrielle Union on their opposing takes of the “toxic culture” of NBC’s America’s Got Talent has now lead to a public apology.

Last week, Union responded to Crews’ praise of the diversity of the competition show she judged before her firing in November 2019 after bringing light to the sexist and racial discrimination on set. Union felt Crews’ insistence of diversity was an attempt to throw her “under the bus” and undermined her claims.

The AGT host expressed his apologies in a series of tweets. He claimed a recent conversation with comedian Kevin Hart to “acknowledge the pain of other people,” and it made him now want to practice what he preached. “I realize there are a lot of Black women hurt and let down by what I said and also by what I didn’t say,” he tweeted.

I told @KevinHart4real a while ago, he needed 2 “acknowledge the pain of other people.” Right now I have to do the same thing. I want to apologize for the comments I made. I realize there are a lot of Black women hurt and let down by what I said and also by what I didn’t say.

I hear you, I respect you and understand you. I am sorry and I am here to support you. I spoke from my own personal point of view without first taking into consideration someone else’s experience.

I allowed disrespectful comments directed at me and my family to cause me to react angrily instead of responding thoughtfully. This certainly caused more harm, and it is my hope that I can amend any pain I have caused to those who were hurt by my words.

@itsgabrielleu, I want you to know it was never my intention to invalidate your experience— but that is what I did. I apologize. You have been through a lot in this business, and with that I empathize with the struggle toward fairness and equality in the workplace.

In now-deleted tweets that were captured by the Daily Mail UK, Crews had a much different response to initial criticism of invalidating Union’s claims. On January 27, Crews cryptically tweeted, “‘I’m a hog. You’re a chicken. Just ‘cuz you gave me eggs – Don’t mean I owe you bacon.”

He followed up in another deleted tweet, saying, “There is only one woman on earth I have to please. Her name is Rebecca. Not my mother, my sister, my daughters or co-workers. I will let their husbands/boyfriends/partners take care of them. Rebecca gives me wings.”

Many people online reacted to Crews in anger, reminding the AGT host of Union’s support and that of other black women in 2017 when he shared allegations of sexual assault. He accused former WME agent Adam Venit of inappropriately touching him at a party in 2016.

Wait... not after all those Black women, Gabby included, stuck their necks out for you? This is beyond foul, not to mention nonsensical - is it only women w/ partners deserving of protection? Really should have just sat there and ate your tootsie rolls.

1,215 people are talking about this

Others such as television host and professor Marc Lamont Hill weighed in with doubt of the sincerity of the apology.

People make mistakes. Apologies are important. Terry Crews’ response, however, feels like damage control rather than contrition. It’s hard to believe he just had an epiphany after a week of doubling down on his initial remarks. This feels like a publicist rather then a principle.

Union has yet to respond to his apology.

Terry Crews was rightfully called out by Gabrielle Union after her America's Got Talent firing - but it seems that Crews is not ready to concede, and once again, threw a little shade Union's way.

After Crews shared that AGT was one of the best experiences of his life and denied seeing and issues of racial discrimination such as Union has encountered, Union hopped on Twitter to accuse him of lying.

"There is only one woman one earth I have to please. Her name is Rebecca. Not my mother, my sister, my daughters or co-workers. I will let their husbands/ boyfriends/ partners take care of them. Rebecca gives me WINGS," he tweeted on Monday.

Comment by vaughn mitchell on February 3, 2020 at 2:55pm
Idiot. Your busted. House negro

Comment by mr1stroke on February 3, 2020 at 2:35pm
So now he is apologizing because he is looking like that house n***** that he is, once black people turn away from you they will have no use for you, let see how long that check will last, you dont get it the purpose of you being there is to get black people to watch the show, why you think you speak with an accent now you b**** n*****

Comment by BIIGMANN on February 3, 2020 at 12:27pm
Sad that black people still hate on each other

Comment by mr1stroke on January 30, 2020 at 12:28pm
F*** the superbowl with their racist league, only niggers with the slave mentality supports the NFL unless you are a player who id making a living or some types of manager, only you have to make the change you deserve, no one will do it for you, real black men stand up

Comment by mr1stroke on January 29, 2020 at 11:39pm
He is a n***** nothing but a n***** and black people need to recognize the niggers in the community like white people recognize white trash, no wonder niggers dont own anything all they care about is a a check, they rather slave in a 9-5 instead of going to business for them selves, they wont support each other in anything, that n***** should of kept his mouth shut, just because a place does business with different people does not mean they are not racist, it calls compromise, thats the same f***** who waited years to cry that his white management boy friend been rubbing his balls, damn f***** n*****