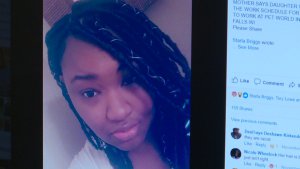 A Pet Work employee in Menomonee Falls says she was denied work because of her dreadlocks. The teen says she wasn’t allowed to clock in for her shift last week unless she changed her hair.

19-year-old Destini Briggs, spent $150 on faux dreadlocks before her shift November 17th. But when she went to clock in, she says her boss had a problem with how she looked.

“‘You can’t have your hair like that. You have to take it out,’” said Briggs. “So I called my mom and told her what happened.”

“I was very shocked,” said Starla Henderson, Briggs’ mother. “You’re selling dog food, you’re cleaning bird poop out of a cage. You’re picking worms out of the box. I don’t know who it bothered.”

Starla Henderson says she and her daughter confronted the store manager, who explained to them that the employee handbook states, “hair is to be natural color and an appropriate style for a retail setting.” Briggs and Henderson say the dreadlocks meet both of those requirements.

“I think it’s appropriate for anything. It’s not too long, I can pull it back, won’t get in the way of anything,” said Briggs.

“I just want to expose this discrimination. I think that it was an ambiguous statement. If you want someone to adhere to the rule book, then it needs to be very plain and simple for everyone to understand,” said Henderson.

The two are taking to social media to share the experience. They argue the issue is much bigger than a dress code dispute.

“You’re telling us how we, meaning African-American people — because this is more something that is from our culture — what’s appropriate and what’s not. This is her freedom to express her black culture,” said Henderson.

Police were eventually called to the store that day to help resolve the dispute.

FOX6 News reached out to Pet World about their dress code policy. Employees at multiple locations refused to give us contact information for the owners.

Jerome S you do know what a plug is, right-----it's what you are, a bytch azz f*****. matter fact, now you know why friends, family and other people go out of their way to avoid you. you're nothing more than a pathetic troll who has nothing to say and no worth. it must really hurt your brain when you think to try to come up with clever retorts which makes no sense----OH WAIT---that's par for the course as you never made any sense and that includes your birth. as I am fond of telling people like you: Go crawl back up into the rotten inbred hole you crawled out of and abort yourself----POOF BE GONE PLUG----but hey, like the woman you are, I know you'll insist on having the last word so i'll wait on it----LMAO

Jerome S  you azz kissing punk. fck you too....that butch bytch called me a coon-----you want to stand up for her/it, bring it. i'll take you to the same place i'll take her/it. STAY IN YOUR LANE PUNK , and don't tell me how to address someone attacking me otherwise you'll get your feelings hurt along with them

Nell T. It is cultural, to women both black and white alike, furthermore black women have made it part of their cultural-----if I were you, I choose carefully who you want to challenge with that African history bullishit. Women have been using adornments on their hair forever since the beginning of time...COON???!!!! Bytch, you want to be a c.u.n.t continue to attack me with your ignorance and you want like the outcome

EL-Bull. Weaves are not cultural. Where the hell you from where weave is culture? Do you know the meaning of culture, brotha? You should read about African history and learn what CULTURE is, before you speak. Ignorance is one sign of a coon.

Nell T.  FOH-----you're victimizing the victim for her cultural choice-----COON

Comment by Jerome S [ Barz ] on November 29, 2017 at 7:33pm
Menomonee Falls, don't exercise proper fair or efficient hiring practice apparently. They might have to name change the town " MenoGotnoDammoneeCauseWe2Racist2RiseSoWe Falls ".

Comment by mssusieqno1 on November 29, 2017 at 3:59pm
Yes. Just obtain a lawyer and give them the business. But, the community need to know about this situation. Also, they just may loose some business for the discrimination. And they should.

Comment by dat gyrl VidaCocolosoQueenEmpres on November 29, 2017 at 1:34pm

There is nothing wrong with her hair and I hope her mom and her press legal action against them. I am getting tired of the people who are the same skin tone sadly of me being so retarded and ignorant .. they need to grow up n stop they hate smh.. and the U.S. is allegedly the land of the free? Where if you can't even wear an appropriate hairstyle because someone doesn't approve of it..... smh ... I definitely hope Destini and her mom see monetary justice if not more ..

Comment by ms angel heaven on November 29, 2017 at 9:36am
I dont see the point in this because her hair dont got nothing to do with her job its dealing with animals damn how dumb

Comment by vaughn mitchell on November 27, 2017 at 4:48pm
What's all the fuss about, just sue their ass for racial discrimination, and get a white lawyer, lol. Nowadays blacks have to do what Jewish people do, they love to sue. Sure their ass, get paid.