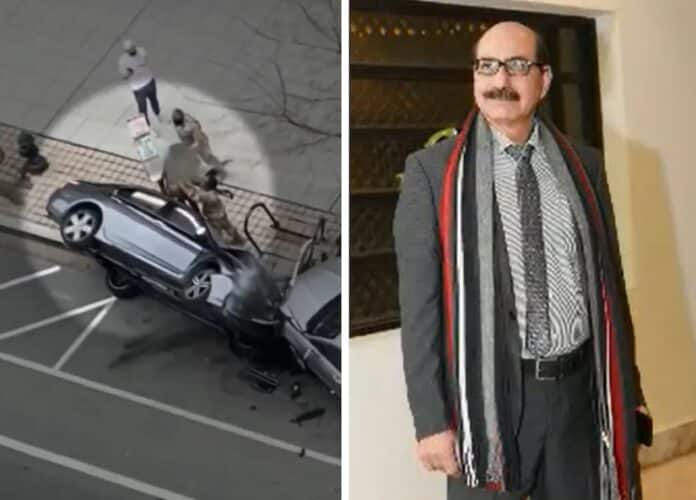 The second teen involved in the killing of Uber Eats food delivery driver Mohammad Anwar, 66, was sentenced this week to juvenile detention until she turns 21.

Per NBC News, the second carjacker, a 15-year-old girl, pleaded guilty to felony murder in May and was also sentenced to juvenile detention until she turns 21

The girls were seen in a viral video carjacking Anwar, who died when as he attempted to stop the girls from stealing his car

Anwar, a father of three who immigrated from Pakistan, was reportedly making a delivery near Nationals Park when the girls tried to take his car. The 1:27 minute cellphone video begins with Anwar standing to the side of the parked car, apparently trying to get one of the teens out from behind the wheel while the other, clad in pink, can be seen in the passenger seat

“They’re thieves!” Anwar shouts as he leans into his Honda Accord, struggling with the teen in the passenger seat. Video captured Anwar’s last words, “This is my car!”

Seconds later, with the driver’s side car door open and Anwar half in and half out of the vehicle, the car speeds off. The vehicle then sideswipes a nearby metal barrier and light pole, causing the open driver’s side door to violently slam into Anwar’s body. The car then races down the block and out of sight, turning a corner onto N Street SE before the sounds of a crash send witnesses who were recording Anwar’s struggle running toward the wreck. Video captures the two girls climbing out of the overturned vehicle with the help of National Guard troops who were in the area — and Anwar face down on a nearby sidewalk, surrounded by debris and apparently struggling to move.

“I never meant to do it,” the 14-year-old said in court on Tuesday, adding, “I will change,” The Washington Post reported.

“No matter how much stuff I’ve been through, I would never intentionally murder someone,” the 15-year-old told Anwar’s family during her court hearing.

“I cannot move past that sidewalk on N Street on March 23rd, where he lay broken, while one of you was only concerned about your phone,” Anwar’s daughter said during the 15-year-old’s sentencing hearing, per Washington’s Top News reported. “You broke most of the bones in his body. No amount of years you spend in any facility can ever make you go through even one percent of that pain.”

She added, “I can never, and will never, forgive you for the pain you caused him.”

Why they always do the crime, then start crying when they have to do the time. What your dumb azz thinks going to happen?

Comment by vaughn mitchell on July 11, 2021 at 4:00pm
@audrey, after they turn 21, they get more time. They won't put them in adult jail, but when they become adults, they will not be in juvie, they will be transferred to adult jail at the age of 18. You don't stay in juvie after 18. I use to work for the system.

These girls should have gotten much more time. It's not OK to take someon life especially a man who could've been their father trying to make living for his family. Smh.