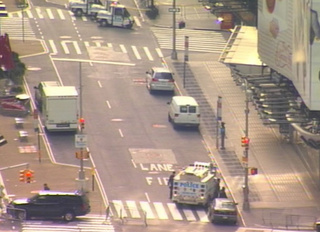 A white van without license plates parked in the heart of Times Square caused a security scare Wednesday that rattled New Yorkers and thousands of holiday tourists milling about amid preparations for the city's massive New Year's Eve celebration.

Just weeks after a police-involved shooting in the area, the NYPD blocked off part of Times Square for about two hours starting at 11 a.m., calling in counterterrorism and bomb squads after officers noticed the 1992 Dodge van, which had a bogus law enforcement placard in the windshield, parked on Broadway between 41st and 42nd streets.

Two high-rise buildings, home to Nasdaq and publishing company Conde Nast, were partially evacuated, but occupants were allowed back in around 1 p.m.

Stephanie Gonzalez, who works in the glass-covered tower directly in front of where the van was parked, said announcements were made around 11 a.m. that people in the building should head to its west side, away from the vehicle. She left the building entirely.

There were no corresponding terrorism threats involving the vehicle, said chief NYPD spokesman Paul J. Browne. No explosive devices were found in the van, and the area was reopened to traffic about two hours after patrol officers spotted the van.

But police take extra care around New Year's Eve when the celebration draws hundreds of thousands of revelers from around the world to the heart of Times Square to see the ball drop at midnight. Squads routinely patrol for suspicious vehicles and do sweeps in garages before the event.

Hours after the scare, Mayor Michael Bloomberg stood outside the Nasdaq building, down the street from where the van had been parked, and declared the city safe for the New Year's Eve festivities.

"Somebody thought it was suspicious. They called. We checked it out. It turned out not to be anything bad," he said. "We take every threat or every potential threat seriously."

Nasdaq said its trading was unaffected. Conde Nast was in the process of evacuating when the order was lifted. But the scene shook those who live and work nearby.

Stephen Radner, an attorney who works on the 40th floor of the same tower, said the announcements to move to the west side of the building caused confusion.

"I couldn't quite understand it," he said. "If there was an explosion, it would have shattered everything in the building."

The van was parked in a row of cars beneath some of the large billboards that ring the square.

Police used a robot to examine the vehicle, then approached on foot and peered in the windows. The van was opened to reveal a disheveled mess of clothing, racks and scarves that looked like a peddler's stand. A temporary registration was also found, but it had been altered, and police were looking for the van's owner.

It wasn't clear how long the van had been parked there, though those who work in the area said the van had been there at least two days. A similar-looking van in the same location appeared on Google Street View in warmer weather, which suggests it could have been there for a while. The vehicle was towed from the spot later Wednesday.

The incident comes three weeks after a shootout in Times Square when a man hawking CDs ran from officers who recognized him as an aggressive panhandler running a scam. Raymond Martinez pulled out a machine pistol with 30 rounds and got off two before the gun jammed. The officer fired back, killing Martinez in the carport of the Marriott Marquis hotel.