STRIPPER WHO FELL OFF 15-FT POLE IS DONE WITH DANCING, RECEIVES GIFT FROM WENDY WILLIAMS [VIDEO]

*Stripper Genea Sky went viral this week after a video showed her falling from the top of a 15-foot pole at a Dallas strip club.

Despite this, Sky continues twerking as if her life didn’t just flash before her eyes. She actually sustained some pretty bad injuries, including a broken jaw, a few teeth and sprain an ankle, but she was able to walk away from the accident on her own.

Now her friends say she’s too scared to perform again.

TMZ reports that Sky lacks the desire to go back to work once she’s recovered, fearing she could injure herself further. She has reportedly received a lot of offers from strip clubs and even musicians wanting her to appear in their music

Yes, I fell off the pole.
Yes, I fractured my jaw.
NO, I’m not f****** okay.
And there’s absolutely NOTHING funny about this situation. This is the worst pain I’ve ever felt and I wouldn’t wish it upon anyone.

When you send a risky text and you get a reply

689 people are talking about this

In a post on her Instagram, she thanked her supporters and shared a link to her GoFundMe page, where she is seeking donations to help cover her medical bills. At the time of this report, the campaign had raised nearly $40K.

“Today has been a very long day. My surgery went well. My jaw is currently wired shut so please refrain from calling me as of right now and bare with me on replies because my phone hasn’t stopped blowing up,” she wrote on Instagram, alongside a photo of her recovering in the hospital. “Everyone’s love & kind words have not gone unnoticed whatsoever and it means so much to me that all of you have blessed me and uplifted me in so many ways.”

She continued, “I was really nervous as this all started blowing up because people are cruel and this is a very sensitive time for me. But I never imagined so many people would stand behind me in a situation like this and that has outweighed all the negativity by far. I am beyond grateful for you all. I am in a tremendous amount of pain but i am ready for this road to recovery so I can get back to my life.”

Meanwhile, Sky appeared on “The Wendy Williams Show” this week where she explained the severity of her injuries, noting that “my broken teeth are all in the back.”

When Williams asked if she had broken a rib, Sky replied, “No,” adding, “Just my face.”

Sky called the accident a “blessing in disguise.”

“There is something I really really really wanted to say, if anything at all. I’m taking this as a blessing. I’ve been praying to get out of this strip club for a very long time.”

She then receives a special surprise from the daytime TV diva… check out the clip below:

Texas dancer Genea Sky, who fell 15 feet from a pole, shares her story and gets a special surprise from Wendy.#GeneaSky #WendyWilliams 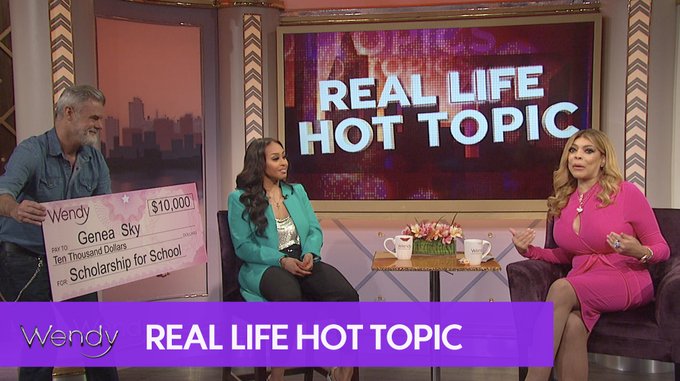 A Dallas stripper nearly lost her life on Saturday night. The beautiful exotic dancer fell more than 15 feet from the top of a stripper pole - and onto solid ground.

But not only was the dancer unharmed . . . . she kept on twerking!

The incident occurred at Dallas' top gentleman's club XTC Cabaret. The dancer was performing a gymnastic move on the pole, when she slipped and fell. She landed on the ground face first, and suffers from broken jaw. The dancer also cracked some teeth, and had to have stitches in her chin. She also claims to have a sprained ankle.

Here's the video that has gone viral:

But the dancer still has her life, and suffered no major injuries. That's pretty amazing given how far she fell.

Here's the woman re-assuring her family and friends that she's alright:

By age 24 u should've dinne something else than stripping.  Ur not intelligent enough to be an investmdnt banker or even realstate.  Also thes nothing wrong with stripping is the people that try to put u down that u strip. Mostly by women who don't have the bodies to strip hate on strippers