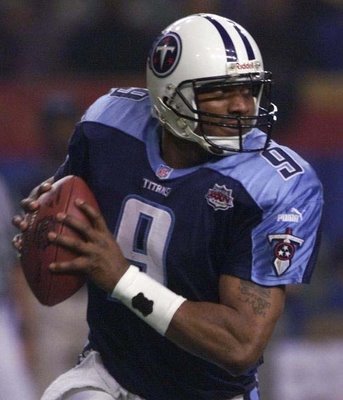 Police said they were called to a home where McNair and the woman were involved in a double shooting.

Police said they do not know the circumstances surrounding the shooting and know the identity of the woman but are declining to release her name.

The 36-year-old McNair, known as "Air" McNair in a 13-season NFL career that ended with his retirement in April of last year, was a former quarterback for the Nashville-based Tennessee Titans.

"We are saddened and shocked to hear the news of Steve McNair's passing today," Titans owner KS "Bud" Adams said.

"He was one of the finest players to play for our organisation and one of the most beloved players by our fans.

"He played with unquestioned heart and leadership and led us to places that we had never reached, including our only Super Bowl.

"Our thoughts and prayers are with his family as they deal with his untimely passing."

McNair last played in the NFL in 2007 for the Baltimore Ravens.

He is a former third overall pick in the NFL's entry draft.

Comment by Sean Paul on July 7, 2009 at 6:29pm
Are You Sean Paul's ultimate fan? Put your skills to the test and send in your best performance of Sean Paul's new hit single "So Fine" and you could win a trip to New York to meet Sean Paul himself! You'll also win an autographed copy of IMPERIAL BLAZE, and a custom weed-man diamond pendant courtesy of Rafaello & Company jewelers!

10 semi-finalists will be selected and then YOU will have the chance to vote and help pick Sean Paul's "Ultimate Fan"! So get out your video cameras and send in your best performance NOW! For more details and to enter NOW visit!


Check it all out here - http://www.allseanpaul.com/contest