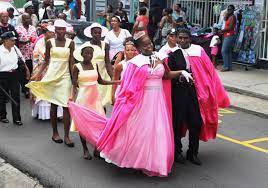 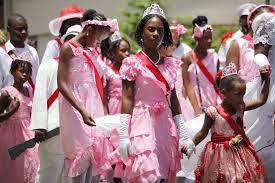 While each Caribbean nation has its own colorful celebration, St. Lucia celebrates two Flower Festivals – “La Rose” and “La Marguerite” held annually in observance of the country’s rich cultural memory, history, and heritage.

These two Flower festivals depict a historical rivalry among communities whose members sing the virtues of their flowers called “seances”.

“La Rose” members pledge their allegiance to the rose by dressing in red and creating flamboyant displays made of roses.

Presiding over the annual festivals are the ‘King’ and ‘Queen who are accompanied by their royal entourage of Dukes, Duch­esses, Princes, Princesses, Soldiers, Policemen, Magistrates, Doctors, nurses, the clerical hierarchy and supporters of the respective flowers. Strict protocol is observed at those nightly Seances, with every visitor or participating member, upon entering, bowing to the King and Queen who are present with their court.

Police and soldiers in uniform enforce regulations against any disorder, breaches of protocol, or what are consid­ered misdemeanors. Offenders are taken before a magistrate for a mock trial and then fined.

Each society has a patron saint on whose feast day the grande fete is celebrated. For the Roses it is the feast of St. Rose of Lima on 30th August; and for the Marguerites, it is that of St. Margaret Mary Alacocque, 17th October.

The grande fete is celebrated, first with church services through­out the island and afterward with processions through the streets, the principal personages magnificently attired. In the evening there is a sumptuous banquet to which dignitaries and leading personalities are invited. The rest of the evening is spent dancing. One can then witness and participate in some of the colorful folk dances, the Quadrille, the Mappa, the Belair and similar dances.