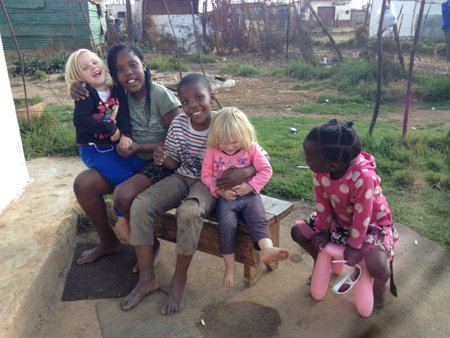 A privileged white South African family is under public scrutiny after slumming it in a poor black squatter camp for a month in an attempt to see how the other half lives, the New York Times reported Monday.

“Give a child love and attention and they will be happy anywhere,” wrote Ena Hewitt on her family's blog, Mamelodi for a Month, about the social experiment that was meant to expand the family’s horizons and understand more about poverty. “There have however been some difficult moments.”

More on Yahoo: Why Are Hamptons Elite Decamping for Trailer Parks? Extra Money

In August, Ena and her husband, Julian — with daughters Julia, 4, and Jessica, 2, in tow with no toys — put themselves on a strict budget and left their gated estate for a tin shack with no electricity or running water, next door to where their housekeeper lives. And while it seems from the family's blog that they learned many lessons on the subject of slum life — from sleeping huddled together on freezing nights to fearing local teens hooked on the potent Nyaope (a blend of heroin, marijuana, rat poison, bleach, and retroviral drugs) — the Hewitts also got schooled by a host of critics who claim their adventure made a mockery of true poverty and the remnants of apartheid.

The family has been called “patronizing” and has been accused of being “navel-gazing folks who can look no further than their guilt-ridden selves” while partaking in “performative poverty” and “poverty pornography.”

The effect — or lack thereof — on their little girls also seems questionable.

“I can appreciate how the parents’ values drove the decision to understand how others live, but I don’t think a 2-year-old and a 4-year-old can benefit from such an experience like an adult can,” Jamie Howard, a clinical psychologist with the Child Mind Institute, tells Yahoo Shine. “They’re basically tagging along, a bit confused.” That’s because of their ages and where they are developmentally, she explains.

“I think teenagers would start to get it. But [kids this young] have only a burgeoning ability to understand the perspective of others, and their main concern is that their basic needs are being met,” Howard says, adding that the experience may not even have a lasting impact, since childhood memories only just begin to stick at around age 3.

The Hewitt girls and their friends in Mamelodi. Photo: Mamelodi for a MonthShe also notes that very young kids do best with routine and predictability, and that a disruption to a daily routine often causes feelings of disorientation and crankiness. “It’s only a month, but that’s a very long time for a 2- and 4-year-old,” she says, adding that it’s important for the Hewitts to put the experience into context so that their daughters aren’t fearful that their living situation could change at any time without notice.

Still, plenty of observers, including their housekeeper, Leah Nkambule, and other neighbors, plus many Twitter followers, praised the family for attempting to bridge the divide.

“It is hard to criticize someone trying to bring attention to poverty,” Sendhil Mullainathan, Harvard professor of economics and co-author of the book “Scarcity: While Having Too Little Means So Much,” tells Yahoo Shine. “In a way this is reminiscent of ‘Nickel and Dimed’.” He's referring to the 2001 book that chronicled writer Barbara Ehrenreich's investigation into the lives of the working poor, written from her perspective as an undercover journalist working as a waitress, a cleaning woman and a Walmart clerk.

But while it would be wrong to be outright dismissive of the Hewitts, he adds that “it'd be very dangerous to suggest they've fully experienced poverty.” Part of that, Mullainathan explains, is because, while some effects of a poor environment (such as fear of robbery) can be experienced quickly, others take time. “How do you simulate the lack of dental care,” he posits, “which leads to a throbbing pain, the lack of health care, which leaves you sick and perhaps with memories of a child (or wife) lost at childbirth?” 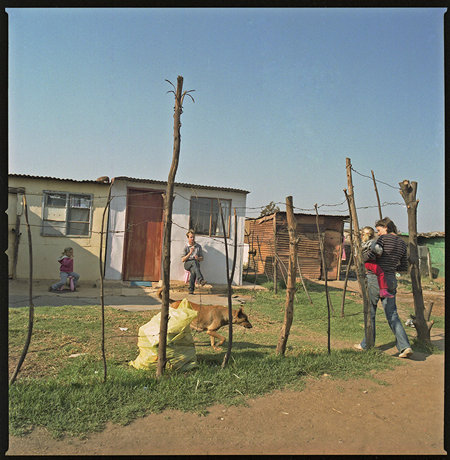 Book co-author Eldar Shafir, Princeton University professor of psychology and public affairs, agrees. He tells Yahoo Shine that probably the greatest concern among the critics of such exercises is the risk of learning the wrong lessons, “or at least of not appreciating the weight of things when they're real and prolonged as opposed to brief and pretend.”

As an example of this sort of skewed takeaway, Shafir points to a family blog entry about the perks of living in the slum, such as sharing a single bed. “We all sleep in one bed here (a habit I am sure is going to be difficult to break once we are back at home) but the kids love it,” Ena wrote. “It’s warm and they feel loved and get lots of cuddles at night when it’s cold.”

As Shafir notes, “All sharing one bed seems cozy and cute when it's a month-long camping experience. It's probably a real challenge, affecting sleep, intimacy, privacy when sick ... when it's the only way, month in and month out.”

Samaki !!!! good observation !!! but to be honest it's dangerous down there I am pretty sure they could have been robbed and killed doing this !!! To me was that maybe they brought attention to wha really a gwan sort of like back when Apartide was rampant some whites did go out of there way of normal life to subject themselves to the same injustice as like the civil rights movement !!!! and like you I hope they bring light back to there urban so all can get better wages never seen South African news or Television but maybe they just had to see or experience it for themselves!!

I like their bold attempt, but a month is way too short for the real thing. I guess they could have gone without sex for a month, but I am still trying to imagine the negative effects and impacts on their social life, in such an environment, for twelve months. There would have been conflicts between the two adults; with one possibly asking the other what what was the purpose fort the experiment. As stated by the writer, one month in that environment, could be viewed as a one month camp out in the woods. Never the less I appreciate there attempt and hope that their maid is given a better salary and employment conditions.