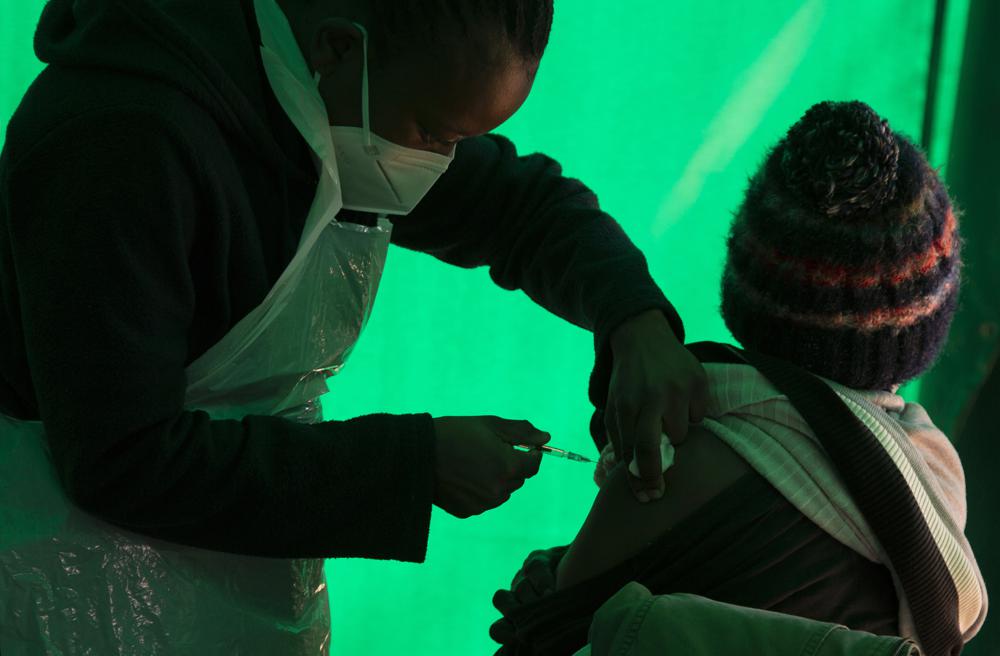 In this June 3, 2021 file photo an elderly patient receives a dose of the Pfizer COVID-19 vaccine, at a clinic at Orange Farm, near Johannesburg. (AP Photo/Denis Farrell, File)

More than 26,000 new cases were reported on Saturday, up from 24,000 the previous day, according to the National Institute for Communicable Diseases, surpassing the highest number of new cases in previous waves and quickly bringing many hospitals to capacity. More than 13,800 COVID-19 patients are currently in South African hospitals where some facilities are canceling elective surgeries to free up beds and health care workers.

South Africa’s official death toll has risen above 63,000, although statistics on excess deaths suggest the country’s actual number of virus fatalities may be more than 170,000.

South Africa’s 2 million cases account for more than 30% of the cases reported by Africa’s 54 countries, according to the Africa Centers for Disease Control and Prevention.

President Cyril Ramaphosa last week increased restrictions to try to reduce the spread of the virus, including extending a nighttime curfew, banning the sale of alcohol, closing many schools and stopping travel into and out of Gauteng, the country’s most populous province that includes Johannesburg and the capital, Pretoria. Gauteng accounts for more than 60% of the new cases and officials fear other provinces and cities will soon follow.After a slow start,

South Africa’s vaccination drive is picking up pace but is still far behind developed nations. To date, more than 3.3 million of South Africa’s 60 million people have received at least one jab of the Pfizer or Johnson & Johnson vaccines. The inoculation campaign started with health care workers, those aged 60 and over and schoolteachers.

On Monday police can get a jab and soon those 50 and over can too.

Neighboring southern African countries including Mozambique, Namibia, Zambia and Zimbabwe are also struggling to cope with a surge of infections.

Guys, I am not sure if this could help, but my sister now is getting more educated in all this IT stuff and she is really keen on free marketing courses. Maybe one of them may help you. The good knowledge perked everyone especially when it's gratis. Anyway, If we had put our heads together instead of acting separately, we would have solved that problem so it's time for me to advise some cool stuff. It's about developing a new marketing tools via Insta, Tik-Tok and FB, take a look at eastern star ltd

Comment by vaughn mitchell on July 6, 2021 at 5:31pm
That China, made virus, was made to kill off alot of the earth population. Those Chines mothereffers, are evil. Sara, bird flu, swine flu, and now covid, all came out of China.