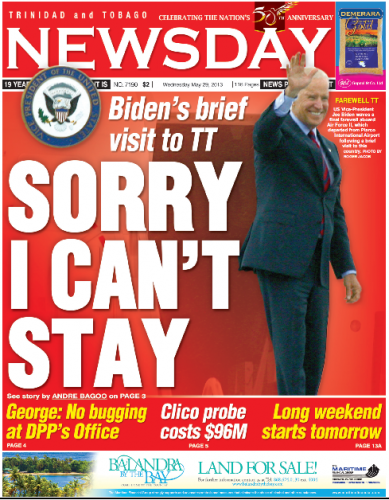 JOE BIDEN, 71, the straight-talking United States vice-president yesterday ended a brief whirlwind visit by apologising for not being able to stay longer, pleading with Caricom leaders to lobby US President Barack Obama for Biden to have more time in the country and the region.

“I have one regret,” Biden told Prime Minister Kamla Persad-Bissessar at a media briefing held at the Diplomatic Centre, St Ann’s. “I can’t stay. I would like very much to stay.” To Caricom leaders in the room, Biden had a special request.

“I’m asking each of you heads of state to please write a note to President Obama,” he said. “Tell him it’s critical that I come back to Trinidad and Tobago and then I can visit each of your islands for us to stay at least a couple weeks.”

It was the end of a thirteen-minute address in which Biden managed to touch upon almost every major policy issue relating to the US and Caricom: combating the drug trade, citizen-security, immigration reform, sourcing alternative energy, tackling climate change, natural disasters, encouraging trade investments, and education. At the same time, the vice-president balanced the shop-talk with his trademark charm, a quality which has made him popular in the United States and elsewhere.

Minutes after he ended his speech and bid the Prime Minister farewell, Biden stopped the vehicle that was taking him to the Piarco International Airport in order to give one final message to the Persad-Bissessar.

“Don’t forget that steel-drum is mine!” he said. “You tell President Obama that!” As with his arrival on Monday night, Biden had been greeted hours earlier by pan music as he walked the red-carpet to enter the double doors of the Diplomatic Centre at 11.14am. Over the next five hours, he paid a courtesy call on the Prime Minister, engaged in bi-lateral talks and met with Caricom leaders. In between, Biden finally found a moment to play a pan after being presented with one by Persad-Bissessar. Both leaders exchanged notes on the instrument.

At yesterday’s media briefing, in response to Biden’s request for more time here, Persad-Bissessar said, “The one request made of me was to write president Obama to ask him to let you come back to Trinidad and Tobago and indeed we will so do.”

In his media statement, Biden admitted there remains “a lot of work” to be done on the many issues relevant to both regions.

“I want to thank you all for what for me was a very fruitful, good meeting. I learned a great deal and I’ve also learned that we have a lot more work to do together,” he said. “We have a lot of work to do and we are anxious to work with you.”

Though he made no explicit reference to the impending visit of the Chinese President Xi Jinping, Biden bluntly stated the policy position of the US to the region.

“We need you,” he said. “And I hope you will find a place in your hearts, in your economies in your quest for energy, in your quest for societalisation, that we can play a part with you.” He said US President Barack Obama sent him with a mandate to engage in dialogue.

“I am here because President Obama wanted me to have an opportunity to dialogue with all of you and because our country is deeply invested and wants to become more deeply invested in partnership with all the nations of the Caribbean,” the vice-president said. “Our search for growth, jobs and affordable supplies of energy, our fight against transnational crime, and the protection of our climate and our environment – all of these have no respect for boundaries and they affect all of our borders. They directly affect the people of my country and each and every one of yours.” He described talks with Caricom as frank and direct.

The issue of citizen security was among the many issues raised as Biden met with leaders at the State Room, the Octagon Room and the Ballroom of the St Ann’s compound.

“We discussed citizen security and I made clear the US approach is this is a shared responsibility,” Biden said. He acknowledged concerns that the drug trade in the region could escalate due to successful efforts to tackle it in other regions.

“We know that as other nations in the hemisphere make strides in drug trafficking, the threat may increasingly shift back towards the Caribbean,” he said, citing successes in Central America. He noted the US has invested over US$30 billion to reduce demand for drugs. “We discussed approaches that need to be taken and desires for more input and more resources from the United States.”

Biden, a former member of the US Senate’s Judiciary Committee and its Foreign Relations where he was involved with the US Central Command and its engagement in the Caribbean as well as “Plan Columbia”, noted funding for the Caribbean Basin Security Initiative is increasing. This is so “even in a time of tight budgets in my country”. The funding currently stands at US$200 million.

“And even as we gather today, our law-enforcement agencies are taking part in joint trade-wind security exercises hosted by St Lucia and also engaged in training exercises in specific countries as well,” Biden said.

On natural disasters, the vice-president said, “We’ve already created an initiative and an innovative model for regional corporation by pooling risks to respond to natural disasters. And therefore I think the whole region is better equipped with these pending problems.” On immigration issues, Biden noted 3.6 million people with a background tied to the Caribbean diaspora call the United States of America home, sending back more than US$8 billion in remittances.

“But they are also part of the life-blood, the dynamism, of our communities and our country. I believe in international relations, as in any relationship, comes down to respect. Do we respect one another. Do we show respect? For my country, that means reforming our immigration system,” he said. He noted Obama administration proposals for reform to the system which could affect 11 million undocumented men, women and children in the country.

“It’s about time to reform the system. To reform the system to afford them the dignity they deserve,” he said. “And respecting your people for living in my country is part of how we will show respect for you and for all of the Americas.” He made no explicit mention of the issues surrounding the handling of criminal deportees, raised by Caricom leaders.

The US vice-president gave an indication of the breadth of the closed-door discussions among leaders by noting that one issue discussed was the need for equal opportunity regardless of sexuality.

On the need to invest in education, Biden cited a dictum of his wife, Dr Jill Biden, a professor of English at Northern Virginia Community College and the Second Lady.

“As my wife (says), any country that out-educates you will out-compete you,” the vice-president said. “We’re gonna continue to invest in education, innovation and I think we discussed again today some novel ways in which we can do more than we are doing now. Because that’s how we will succeed in the 21st century.” He noted the Obama’s administration’s efforts to encourage marketplace competition and connections with “a diaspora of business leaders”.

“We welcome 100,000 students from across the Americas and we hope to send the same number of Americans to the rest of the Americas. We are working very hard to include more students throughout the Caribbean,” he said. Biden said the US was aware of the challenges facing island nations.

“Economically, the President and I are aware that island nations face special difficulties. The cost of doing business can be higher, goods more expensive, and in a globalised world, everything can become more attenuated,” he said. “And so, through the Caribbean Basin Initiative, we’ve eliminated tariffs on 85 percent of goods and now are looking for additional ways, you discussed some of them with me today, to help create growth and diversity in the economies of the Caribbean.”

Biden, Persad-Bissessar and outgoing chairman of Caricom, Haiti President Michel Martelly signed a trade investment agreement, updating a similar agreement signed in 1991. The US vice-president said the agreement was, “A vehicle to overcome special, specific practical barriers to trade and investment and accommodate those changes as rapidly as possible. Our goal is not simply growth, but it’s growth that reaches everybody.” Renewable energy as a means of dealing with energy costs was also discussed.

“We also spoke today about how to lower cost of energy and increase the share that comes from renewable energy,” Biden said. “We hope to promote clean technology and energy throughout the Caribbean. There is probably no group of nations better situated to take advantage of renewable energy possibilities here in the Caribbean.” He noted last week’s signing of an MOU (Memorandum of Understanding) with Trinidad and Tobago to launch a renewable energy research centre. At one stage in his speech, Biden suggested he had visited Trinidad and Tobago before, but gave no details.

“And so ladies and gentlemen let me conclude Madam Prime Minister by thanking your for the incredible hospitality of your Government and the people of Trinidad and Tobago and I only say, it’s good to be back to Trinidad and Tobago,” he said.

The US Embassy said Biden had not visited since becoming vice-president in 2009 and had no further details.

Comment by Bons_59 on June 1, 2013 at 8:16am
Blah, bla, bla bla, bla,,,,,, bla. All talk don't believe da hype, initiatives established in 1991,,,hasn't visited since 2000, only reason he has visited, is because China is moving in, too little tooo late, don't believe da hype, if the were truly committed to the region the Prez, should have come himself, as usual no true respect for the region.