Son, 48, 'hacked his 78-year-old mother to death with a meat cleaver then lay on top of her lifeless body when police arrived at their NYC apartment'

A New York City man allegedly murdered his 78-year-old mother with a meat cleaver and laid atop her lifeless body when police arrived to their apartment.

Authorities dispatched to a Queens borough apartment on Saturday morning after they received reports of an unconscious woman.

But QNS reports that officers found a trail of blood that led up to the fourth-floor apartment of Carmelita Cabansag.

Officers knocked on the front door and were greeted by her son, 48-year-old David Galicia.

Galicia was reportedly covered in blood, but let the officers inside the apartment.

Second later, Galicia is said to have walked over to his mother's dead body and laid on top of it. 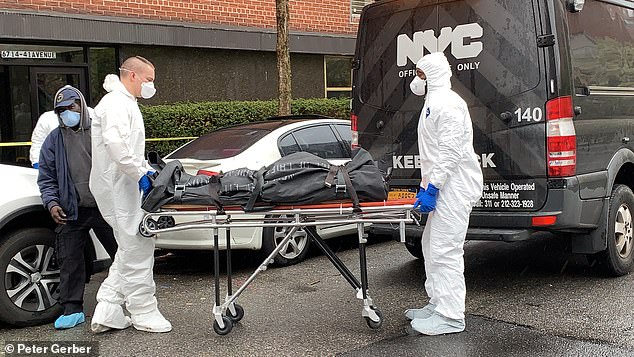 Two knives were found on the floor next to Cabansag and responding medics pronounced her dead at the scene.

Cabansag's body was taken to the Medical Examiner's office for an autopsy to determine the official cause of death.

Galicia was rushed to Elmhurst Hospital with stab wounds in his chest and body.

Galicia was transported at the NYPD 108 Precinct for questioning and allegedly confessed to the killing,' New York Post reports.

Comment by mr1stroke on April 26, 2020 at 4:57pm
The beginning of your nee life the future is already here, you will hear things like that back to back, and yes many are too blame, you choose to have those demons with bastard fathers who wont be around to raise them, or you choose not to be with the fathers who want to be in their kids life instead you chase them away claim you can raise your kids by your self, well look at the result you raise those kids with no responsibility some of those bums are 30 years old at home living with you, they wont get a job but you feed them and give them money, what do you expect they give you back what you gave them and what ever that is it was not love, they never had any one or anything to care for, you never showed them how so its easy for them to take your life, now who loves you best? Until death do you part, so it shall be written so it shall be done, keep reading your bible tell me where you see the lies