So What Do You Think This Lady Found In Her Canned Green Beans? 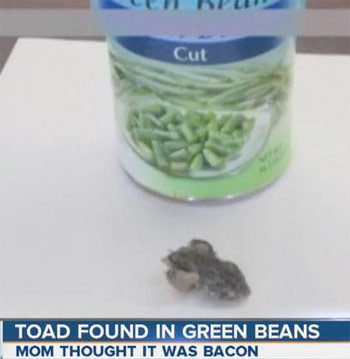 Gloria Chubb of South Bend, Indiana, was shocked when she discovered a toad in a can of Meijer green beans. Chubb told WBND ABC 57 that she was in a rush that day and didn’t notice the amphibian until after she emptied the can and microwaved the green beans. She said, “My son put some on his plate and said, ‘What is that?’ I thought maybe it was a piece of moldy bacon or something– because they have bacon in them sometimes…I and I took it out of there and it wasn’t moldy bacon, it was a toad with parts of his little legs all in the green beans. Other than that he was fully intact.”

Chubb returned to the Meijer store with her remaining unopened cans of green beans and received a refund. She then took the two questionable cans to the health department. After investigation, the Indiana state Department of Heath concluded that the toad was processed along with the beans at the Wisconsin wholesale canning plant. Food Service Director for the St. Joseph County Health Department, Rita Hooten said, “When the green beans were picked from the field, it was also placed on a conveyor line and just was accidentally put into the can of green beans during process.” The Health Department consumer specialist who compiled the incident report said that because factory canning is fast paced, and green bean fields are natural habitats for frogs and toads, finding them in canned veggies is unusual, but does happen from time to time. Chubb said she reached out to the health department because she wanted to warn others adding, “I mean, anything can happen you know, but a whole frog?”

Chubb received a letter of apology from the canning company along with $50. Meijer issued a statement saying, “Our goal at Meijer is to always provide the highest quality products to our customers. We sincerely regret this customer’s experience, and we are in the process of investigating the incident.”

That is one of the reason I don't eat anything from and can the other reasons are the preservative and the salt, not healthy at all...