Sleeping With Your Dog Could Spread The Plague!! 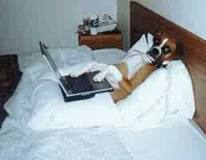 Do you let your dog sleep on your bed? You do, don’t you? Once you read this story, you might want to rethink that.

There were only two cases of bubonic plague in humans in the United States last year. They were two people, unidentified except for their ages — 17 and 42 — who lived in the same household in the high desert country of Lake County, Oregon. In August, they both came down with high fevers and hard, lumpy swellings in their groins. The older one, a woman, was very sick, was hospitalized with low pulse and blood pressure, and went into kidney failure.

Physicians couldn’t figure out what was wrong. In her blood, they found a rod-shaped bacterium. Four different diagnostic labs took a crack at identifying it. The first said it was Acinetobacter lwoffii. The second suggested it was Pseudomonas luteola. The third guessed Yersinia pseudotuberculosis.

It wasn’t until 25 days had passed, and the woman and teen had recovered, that the isolate got handed up to the regional health district laboratory, part of the state health department. Then someone identified it for what it was: Yersinia pestis, the bacterial cause of plague.

That rang all kinds of alarm bells. Plague is a Category A bioterrorism agent, the highest ranking of three: It causes severe illness and can pass from person to person. Also, it triggers what planners bluntly term “public panic and social disruption”: For centuries, plague has been something we are very, very scared of.

It also makes people very, very sick. On average in the United States — where there are only a few cases per year — one out of seven people who contract plague die of it. If bubonic plague goes untreated, the death rate goes up to one out of two.

So a case of plague makes public health investigators, and bioterrorism responders, come running. And as recounted by the CDC Friday morning, they ran to Oregon — and found no sign that this rural household had been subjected to a bioterror attack or involved in anything nefarious. But they did find dogs. One of the dogs slept on the bed of one of the humans. They checked the dog, which looked healthy, and in its blood they found evidence that, at some earlier point, the dog had been infected with Y. pestis too.

Where did it come from? The natural hypothesis is fleas.

Rodents — rats, but also mice, chipmunks, prairie dogs, ground squirrels — are a natural reservoir for Y. pestis. Fleas on shipboard rats were the vector that carried the plague from Asia to Europe in the 14th century, eventually killing one-third of the population of the Western world. Fleas from wild rodents are the source of the 10 to 20 cases of human plague in the United States every year. And fleas, apparently, had bitten this dog.

Imagine it: A loved dog, probably a big dog, racing through a dog’s perfect landscape: flat, wild, open, full of things to chase and smell and stick its nose into. Running after chipmunks. Tearing through prairie dog burrows. Romping home happily to flop on the bed and dream, while the fleas that jumped onto it hop off again, from the dog to the quilt, from the quilt to the pillow, from the pillow to the owner sleeping unknowingly alongside.

Imagine that, for a minute. And then go buy a flea collar.

Comment by Bombahdrop on March 3, 2011 at 10:24am
I love all animals call me an animal lover I've had dogs in the past but where i cant have one now its to much work but i do have a cat, his name is Kill4 lol

Comment by Sensational Styles on March 1, 2011 at 4:00am
thats nasty, i would never sleep with my dog in my bed.

Comment by Chanell on February 28, 2011 at 10:09pm
A dog can't protect you or alarm you of intruders out in the back yard.  I have no problem with the dog being in the house she warns us and give us enough time to grab the gun but dog in your bed is another story.

Comment by incombustible on February 28, 2011 at 8:56pm
hate animals in the house too dirty!

Comment by Loveli on February 28, 2011 at 7:13pm
having your dog or any other animal up in your bed,  couch, kitchen table etc is plain out DISGUSTING!! some ppl are just nasty..

Comment by Bombahdrop on February 28, 2011 at 4:41pm
Nawww really ya think. I thought sleeping with animals dogs in this case was how u got a plague in the first place to begin with. when you lie down wit dog u catch fleas and a plague nasty ass human beings some humans should have been made animals because animals arent this nasty as humans.