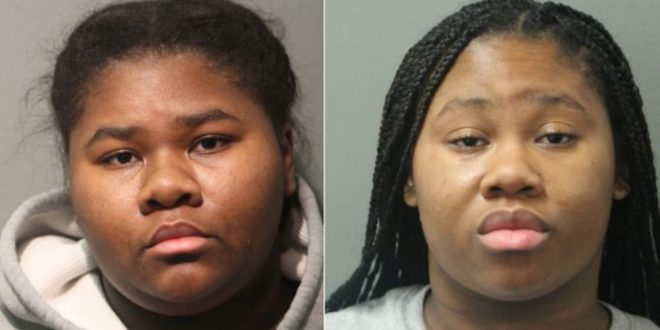 In Chicago, two women have been arrested after a cruel act where one woman held a man while the other stabs his body dozens of times heartlessly.

Police stated that 18 years old Jayla hill and her sister 21 years old Jessica Hill stepped into a shoe store on Sunday night, where the security guard gave them greetings and requested the girls put on face masks due to the current pandemic situation.

Moreover, the guard asked them to use the hand sanitizer that was placed in front of the store. However, the sisters ignored whatever he said and refused to follow the SOPS(Standard operating procedure). After this, a verbal argument started between the girls and the 32 years old man, officials stated.

Thins escalated as one of the sisters found the trash can and break it on the security guard face who was a 6-foot tall man with 270 pounds weight. It did not stop there, the woman started punching him hard.

After the quarrel changed from verbal argument to physical fight, Jessica hill took out her knife from the back pocket to stab the security guard.

The worse happened next as one of the sisters Jayla hill grabbed the guard from his hair and held him in one place to help her sister, said Karie James, Police Spokeswoman.

Jessica hill punctured the man with a knife at least 27 times in the chest, back and arm, as reported in Chicago Sun-Times.

According to the investigator, after the guard turned out to be free, the sisters kicked him in the body and head, the camera placed in-store captured this entire incident.

On Tuesday Judge Mary Marubio stated that it is something completely random, furthermore, she said that the incident is terrifying.

The judge ordered the sisters to be held without bond on attempted murder charges.

When white cops do this to black people, they don't get charged

Damn....what a shame these girls didn't love and appreciate their own lives. So sad!

Comment by vaughn mitchell on October 29, 2020 at 7:47pm
Go to jail, straight to jail, their lives are over. Ratchets. White people curse , and act stupid but these ratchets take it a step further, when they get the virus in jail, they will be reminded that they kill someone for not wearing a mask.