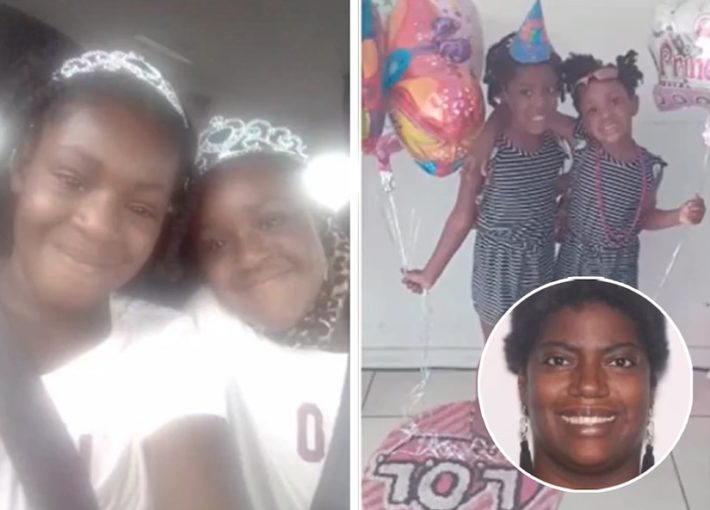 A Florida woman is being looked at as a person of interest in the deaths of her two daughters who were found dead in a canal on Tuesday.

Per PEOPLE, Tinessa was allegedly offering baptisms the canal on the day her daughters were found dead.

“She was in the canal,” Lt. Bigwood said. “She was offering to baptize people in the neighborhood.”

“She was in the water swimming, she had a Bible and she told me to come here. I said, ‘Why?’ She said she wanted to baptize me,” neighbor Lawana Johnson told CBS Miami. “She says God told her, I say ‘God didn’t tell you anything.’ “

Tinessa is in custody, but according to the report, she has not been arrested.

“She is not in the community right now and we’re not at liberty to say where she is,” Lt. Bigwood said. “The mother hasn’t been questioned at this point.”

An autopsy is being performed to determine the cause of death of the sisters.

“Any knowledge of the family, the family dynamic, activities that the family engaged in together, just general information about who they were and what their day to day life was like would be extremely Helpful,” Lt. Bigwood said.

The girls’ father has been estranged from them for “at least a decade,” said Lt. Bigwood.

@A13x this isn't just a woman thing, so stop it. But it appears that she should be in jail by now. She seems like a Cuckoo bird.

Comment by Al3x on June 26, 2021 at 8:17pm
This is why the Bible forbid women to preach the gospel or lead anything. That was not her calling. Hurry up and arrest her.