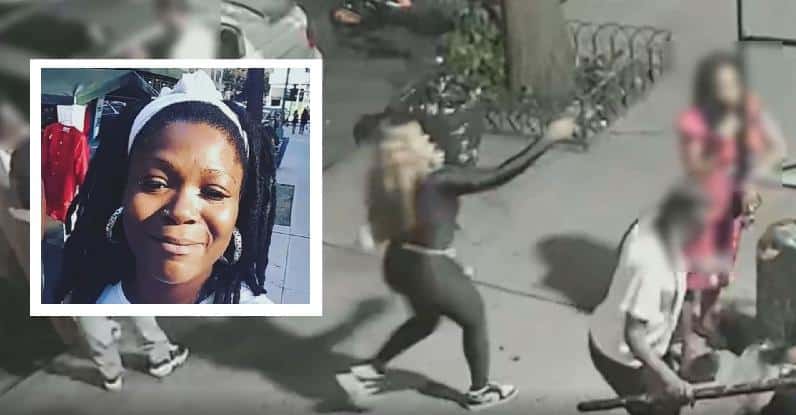 Life is short, and no one can predict the events that lie before us. Today, a family is mourning the loss of a 42-year-old #Brooklyn mom.

An #NYC surveillance video shows the disturbing footage of the victim being executed on a crowded street in #CrownHeights. A woman quickly approached the victim, identified as #DeliaJohnson, and then shot her in the back of the head and again in her leg as she collapsed. The shooter quickly ran for cover and left the scene in a white SUV.

Police believe the murder was premeditated, as an unreleased extended video shows the suspect hanging around the area long before the shooting and her being handed something by a male behind her back before Delia’s slaying.

“She was at a funeral earlier in the evening for an old neighborhood friend to pay her respects, and then this happened,” said Delia’s brother, Mathis Johnson. “It was horrible. That lady executed my sister.”

Mathis believes the attacker may have followed his sister from the funeral earlier in the day…to read the rest log on to BallerAlert.com (clickable link on profile)

This shocking video shows the moment right before the murder of a 42-year-old woman on a Brooklyn street beside an apartment building. Police say another woman just walked up and opened fire, but no one knows why. Both women attended the same funeral earlier the same day.

The suspect is identified but no arrest has been made, the killer is still on the run.

Learn more from the CBS news report below.

According to the victim’s mother, “Her community loved her and that real” She also expressed that her daughter had no known enemies.

Lol don't waste your time trying to guide niggers find your self a blind person and guide him or her, they may not have visibility but they are wise with a brain to learn

It's a black female killing another black female.....it's okay folks.  As long as we kill each other it's okay, as long as it ain't a white cop killing one of us.  Nothing to see here folks, Al Sharpton, Eric Adams and the other black leaders didn't complain, so it's okay.  How hypocritical can black folks be?  Between us killing each other and the implementation of the vaccines, within 3 years there won't be many blacks living.  Beautiful plan.

Robert youre making too much sense, you cannot explain big dreams to small minded individuals, those are born slaves who are loyal to serving their masters, they will get upset at you unless you agree to stay in the plantation with them and this is what the black community represents today.

The same slave niggers who are talking about the cops are the same one who won't talk to the cops or report a crime, they live by the no snitches code, instead they will film in on their phones and post it online, they will repeat anything they hear from white people they can think for their selves, you can tell when youre talking to uneducated niggers who repeat after their masters, they are concern about vaccine like that is going to save black people, but what was the reason why niggers have been killing niggers in the black community before the vaccine, what happened during the stop and frisk days, were the cops doing their jobs? Confusing ass niggers repeating after white people, tell us something that you research instead of repeating, Lear about the vaccine labs and you can understand, that dumb n***** already took 4 shots of vaccine got his free fries and a $100 debit card, this is so sad lol, niggers love free stuff they want even question why forcing that vaccine on people so much even paying, the government dont help you pay your health carw premium or copay but can afford to pay each person $100 and give free vaccine outside of the United states, if 4 millions people take that vaccine and get pay $100 how,much is that again, well for that n***** he is on public assistance he dont care

The Indians, the Asians, the Jewish all have their own community, they own their businesses, when the last time they released the number of them shooting each other, how come on the weekend they too busy celebrating and not shooting each other, can some one provide the numbers, has any one ever go to those parks where they are indians in the community, do you see how they bring their whole family to party, they do birthday parties, even anniversaries, they play their music so loud like they arw the only one exist, a public place but no one says nothing, do you realise I did not mention the white community? Now lets hear it from the niggers.

Comment by vaughn mitchell on August 8, 2021 at 1:16am
@Robert, it's not fail politics, the cops don't want to do their jobs because some of them want immunity from killing innocent black people. Kill the rapist and killers it's ok, but killing innocent people. Don't worry the red states people are dying real fast, because they don't want to take the vaccine, and Don't want to wear mask. Arkansas, Texas, florida, Mississippi, Alabama, don't worry trump will get back in and a civil war will start, the dictator in chief did not do s*** but made himself rich. I hope you got your Trump credit card. It took one idiot to become the worst president ever, the Democrats are too soft he should be in jail.

Comment by Natesha Tucker on August 7, 2021 at 11:34pm
@Natalie, you know thats right, and they say she is identified i hope it was all worth it!

This is sad because it's more than likely over 2 things a raggedy man aka the village ram or money that was owed.

Comment by Natesha Tucker on August 7, 2021 at 8:04pm
Anyone watches when someone seems like they are doing a bee line in public, after this covid s**t!!! Anyone too calm for me is a red flag!!!