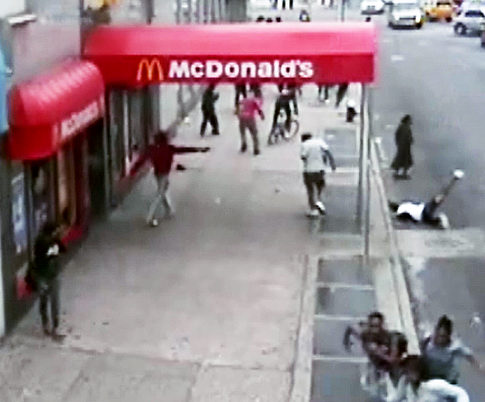 Three toughs pulled off a choreographed plan to pass a gun between them like a hot potato before one of them opened fire at a teen outside a Brooklyn McDonald's - and all of it was caught on camera.

The dramatic video shows the gunman unloading on Sewall with a .32-caliber Smith & Wesson outside of the fast food joint, sending him rolling out into the street, passing through at least two lanes of traffic.

Near the end of the clip, two men can be seen running over and snatching two white bags that Sewall had dropped onto the street - and high-tailing it out of there on foot just as a police van pulls up.

Before the violence, Sewall, who lives just blocks from the burger shop, had gotten into an argument on nearby Flatbush Ave., a block away from CUNY-Brooklyn College.

During that spat, a man told Sewall to come with him to the McDonald's, police said.

A throwdown, and not greasy burgers and fries, seems to have been their desire.

Sewall followed, but couldn't see that an intricate gun handoff was unfolding on the sidewalk outside the McDonald's - an elaborate scheme caught on an NYPD camera before Sewall walked into the frame, and his terrible fate.

"What you see here is a pretty elaborate choreography of handing off the gun from the first player, to the second player and to the gunman - all along luring the victim to the ambush," said Paul Browne, top spokesman for the NYPD.

The video shows a man in a white T-shirt approach another man wearing a black shirt and carrying a black bag. The man in the white T-shirt is handed the bag and pulls out the revolver as his pal walks inside the restaurant.

The armed man waited at the door until a man clad in a red jacket - the one who was arguing with Sewall earlier - walked up and took the loaded piece.

As the pair walked into the restaurant, a furious Sewall marched toward the entrance.

Suddenly, the gunman stepped out of the door, aimed the pistol at Sewall's head and fired - but his aim was not as good as their gun-handoff plot.

The bullet grazed the left side of Sewall's head, sending him staggering back toward the curb as frightened onlookers scurried out of the way.

The gunman stepped toward Sewall to finish him off. He squeezed off another round that caused Sewall to drop and convulse on the street. The shooter fired three more times as the wounded teen tried to roll out of the way and into the middle of the busy road.

Sewall - who has eight prior arrests, including five for robbery - was hit in the torso, groin and leg in addition to the graze wound. Police said he was in critical but stable condition at Kings County Hospital Wednesday.

The gunman and the gun-passers fled out of a back entrance of the restaurant and dumped the six-shooter - which still had one live round left in it - in a trash can a block away, police said.

Investigators were still searching Wednesday for the gunman and his accomplices, who are believed to be known to Sewall, police sources said.

Sewall's friends who witnessed the wild shooting told police they didn't recognize any of the suspects - a story detectives aren't buying, the sources said.

Police hope someone who sees the video will recognize one of the conspirators. Anyone with information is asked to call the NYPD's Crime Stoppers tipline at 800-577-TIPS.

Comment by Bombahdrop on October 2, 2011 at 7:45pm
PUT THESE LIL MOTHER F****** ON A STRICT CURFEW AND IF THEY DARE BREAK THE RULE HAVE SEVERE PENALTIES FOR THEIR CONSEQUENCES. THIS HAS GOT TO BE CURBED SOMEWAY AND NOTHING IS BEING DONE ABOUT IT. TRY SOMETHING, ANYTHING!!! WHY WAIT TILL IT'S ONE OF OUR OWN BEFORE WE SAY OR DO SOMETHING. MANY PARENTS ARE LOOSING THIER KIDS TO SENSELESS GUN VIOLENCE AND THEY ARE LIVING PROOF S*** IS REAL AND OUT OF CONTROL AND STILL NOTHING IS BEING DONE, WHY!

Comment by Sharon Smith on October 2, 2011 at 7:32pm
leave the ***king guns alone what about the good old fist fight... but seriously too many lives are wasted everyday.......the senseless killings need to stop

Comment by BigginsMarie on September 30, 2011 at 8:53am
Sad is all I can say. Right by the college too, all they asses should have been in class instead and they wouldn't have time for this s***.

Comment by selvin williams on September 30, 2011 at 7:43am
he got shot because he could not just drop what ever it was, he had to go all the way,if you look good it is as if he was reaching for his waist,look at how he walked down the sidewalk as if he was king kong, well we had seen king kong  fell so did he..it was not two bags that he drop from the frame you could see that it was his sneakers that flew off....WONDER WHY THAT ALWAYS HAPPEN THAT THE SHOE ALWAYS GOT TO BE OFF THE FEET EVEN WHEN SOMEONE IS HIT BY A VEHICLE    STRANGE..lucky punk the shooter was planning to kill him from the looks of thing he aim for the head and miss,,,this will give him some time to think of his ordeal and try to see if he can change,knowing how it is he know these people so as soon as he get on his feet he will be hunting them down,,,BET ANY MONEY THEY ALL HANG OUT AS PALS....we will see

Comment by JamRockLady on September 30, 2011 at 1:14am
So, someone's life is reduced to the cost of a pair of sneakers??? Senseless INDEED!!

So the jackass runs back in the mc donalds

@ Tallislandgirl, that sounds like a good idea, I know a couple of cops at the near by precinct so I will check it out, funny thing is, I was gonna go that way around the same time of the shooting to make photo copies, my 2 year old started acting up, so we didnt go, when I left for work 30mins later, blood and ting all over de middle of the street. This has got to stop, will be going to the precinct.

Comment by bigtyme175 on September 29, 2011 at 8:48pm
WHAT EVER THE CASE WAS LET'S JUST SAY IF THE USA PASS A LAW WHEREAS ANYONE WHO IS CONVICTED OF FIRING A WEAPON IN PUBLIC GET SENT TO A WAR ZONE FOR LIFE YOU WOULD SEE HOW MUCH THE NATIONAL GUN CRIME RATE WOULD DROP.

Comment by Bombahdrop on September 29, 2011 at 8:33pm
I don't see why it would be difficult for the NYPD to find a shooter that is caught on camera. They'll find this Punk/Coward, who has no regard for human life, and that Obviously can't fight with his hands worth s***, the reason why these Gunman run go get the hammer to begin with. If you can't fight with your hands You shouldn't get into Altercations. Why be triflin and fight unfair by shooting your fellow brotherman  or sister.