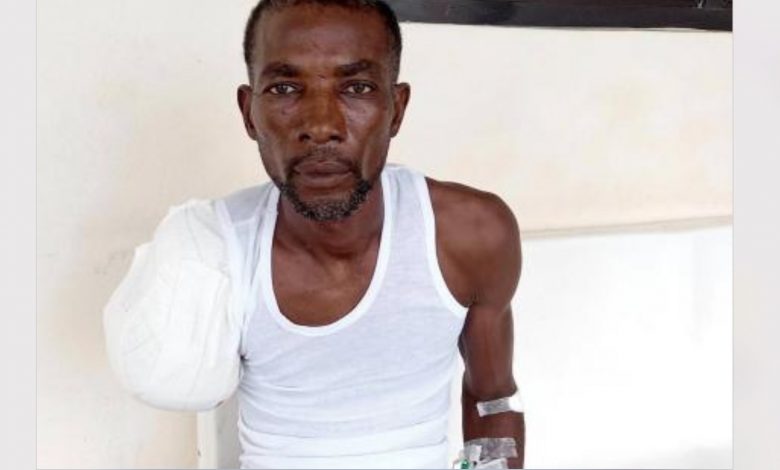 Just like any other day, fisherman Michael Simpson ventured out into the waters in order to earn a living. Little did he know that the winds of danger were blowing in his direction. On Friday, June 24, 2022, Simpson’s work day was cut short after he fell victim to a 15-foot tiger shark and lost his right arm while grappling for his life.

He admitted that his determination to survive was the only reason he overcame the horror. Mr. Simpson stated that when the shark started to pull him he lost hold of his fishing gun and if he did not fight with everything he had then he would have died at sea.

The victim of the vicious attack is a veteran fisherman 29 years strong and hails from Lionel Town in Clarendon. He set sail from Salt River at around 8:00 am on Friday. The terrifying attack took place somewhere between Half Moon Cay and Miller Bay sometime after 2:00 pm that day.

Although Shark attacks are almost nonexistent in Jamaica, a rise in incidents like this one has been reported in the last few years. With his right shoulder heavily bandaged and his heart heavy, Simpson admitted to being extremely shocked and his fellow fisherfolk also understandably too. He shared during his interview with The Gleaner that when his colleagues took him to the hospital, many were crying and swore that they would never return to the sea.

A quote by Simpson states that “mi feel something bounce on me, but mi a think is one of my friend them, ’cause a so them love romp all the while…” After realising that his opponent was a shark, he started to fend it off by using his fishing gun to stab the shark. However, after the gun fell he had to get on its back and wrestle with one arm.

Several attempts at crying out for help failed before the boat driver took note of his plight and rushed to his rescue. Simpson explained that the shark was shaking him from side to side with the arm as its anchor and must have heard the boat approaching because it suddenly got more aggressive leading up to him losing his arm.

He was rushed to the Lionel Town hospital before being transferred to the May Pen Hospital. The fisherman says that he is grateful to be alive today because of the severity of his blood loss. He said that losing an arm may be tragic but he still has to give God thanks for being alive because it could have been worse.

Mr. Simpson told The Gleaner that he fought back and feels like a winner at the end of the ordeal. Although brave and proud of what he had to overcome, Simpson is worried about his family’s future and especially the future of his son who is scheduled to graduate in July from the Bustamante High School now that he has lost his sole method of income.

The arm that was lost was his dominant arm and in order to generate an income as a fisherman, he would have to fulfil a myriad of labour-intensive tasks. He admits that being one-handed has already left him being a huge burden to those around him and he finds it hard and ungainly to push forward left-handed.

He closed out his interview with a warning to other fishermen to be careful and alert out at sea and to not allow what happened to him to happen to them.

If you or anyone you know wishes to reach out to Michael Simpson, you may contact him at the following number, 876-236-9292.

Watch as the man explains below.

The Jamaican fisherman was traumatised by his close encounter with death but came out a survivor from what seemed to be the longest fifteen minutes of his life. Simpson recounted his disturbing contact with the shark to a member of The Gleaner at the May Pen Hospital where he was admitted.

must of been alot of meat on them bones .Dag glad he made it