Gunman opens fire, killing 2 people and seriously wounding a third in 'targeted' shooting at Wisconsin casino before being shot dead by police

Seven people are injured in mass shooting at Wisconsin casino: Gamblers flee as gunman opens fire before being arrested by cops

The casino warned of an 'active shooter situation' in a Tweet posted at 9:18pm and told people to stay away from the area. The casino later said the suspect was in custody.

Fox 11 reported dozens of police cars had raced to the casino in Ashwaubenon, across Highway 172 from Green Bay Austin Straubel International Airport.

Witnesses reportedly heard rapid fired shots and officers were spotted drawing their weapons as they entered the casino on Saturday evening.

Gambler Max Westphal said he was standing outside after being evacuated for what he thought was a minor issue.

'All of a sudden we hear a massive flurry of gunshots - 20 to 30 gunshots for sure,' Westphal told WBAY-TV. 'We took off running towards the highway ... There had to have been 50 cop cars that came by on the highway. It was honestly insane.'

There was no information immediately available on any possible fatalities, the severity of injuries, or details about the shooter. 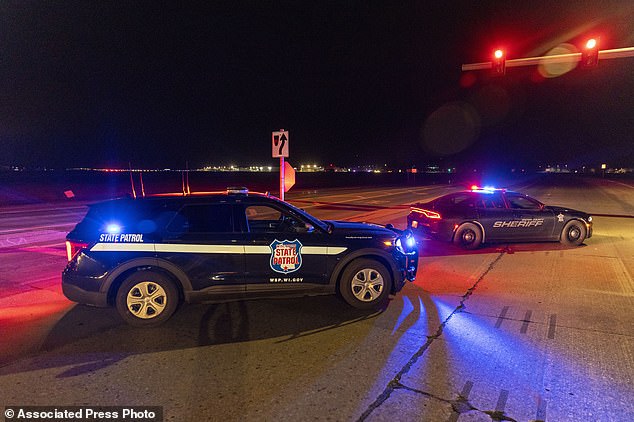 Footage taken from the casino carpark shows people appearing to run away from the building as officers with their arms drawn arrive.

'There is currently an active shooter situation at the Oneida Casino,' it Tweeted.

'Several Law Enforcement agencies are working to secure the location. Please do not go near the Main Casino on Hwy 172.'

All available medics were dispatched from local counties Shawno, Outagamie and Kewaunee.

A few minutes later the Oneida Casino updated their statement to say a suspect had been arrested.

'Shooter is in custody. Seven people shot. Authorities are currently working to clear out the casino. Multiple law enforcement agencies on scene'

Attorney General Josh Kaul tweeted shortly before 10pm that the scene 'is contained. There is no longer a threat to the community.'

Gov. Tony Evers issued a statement late Saturday saying he was 'devastated' to hear about the shooting, but gave no details.

'While we are waiting for more information, we hope and pray those who were injured will recover and are grateful for the first responders who quickly responded to the situation.'

The Oneida Casino is operated by the Oneida Nation.

The casino is connected to a large hotel and conference center, the Radisson, also owned by the Oneida Nation.

The casino tweeted Saturday night: 'West Mason Casino, The Travel Center and Packerland Casinos will re-open at 8 am, Sunday, May 2, 2021. Main Casino and IMAC will remain closed until further notice'.

The Oneida tribe's reservation lies on the west side of the Green Bay area.

OMG. That's why I prefer online gambling with qyto.com/casino/

You don’t have to leave the house to make money and I find it very cool. I use List of Casinos That Accept PayPal with the best online gaming platforms, and for me this place has become iconic, I really like it.

It can be difficult to find a successful casino, so it is best to get help as soon as possible. If you want to find out which casino you want, go to https://pm-casinos.club/personal-cabinet/  , where you can find all the info. I gained a great deal from it, and I suggest that everyone read it. Hope I was able to help you, I wish you the very best of luck! I'm playing that part right now.