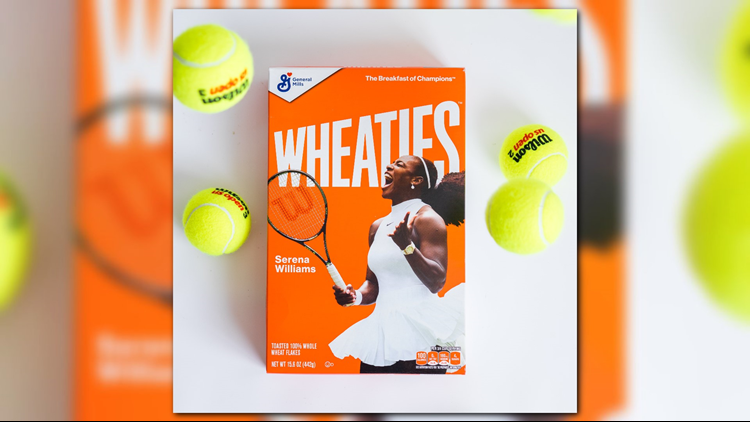 Tennis phenom Serena Williams, despite racking up accolades as an Olympic gold medalist, with a record 23 Grand Slam wins under her belt, a new baby in her arms and landing business deals left and right, has never been had her picture on boxes of Wheaties.

That is, until now.

With an announcement on her Instagram account on Tuesday, Williams says she will finally cover the boxes of the cereal which dubs itself “the breakfast of champions, Glamour reports.

Looking exuberant as if she’s just won the lottery, Williams has her mouth wide open mid-scream in a white tennis outfit with of course a tennis racket in her hand and her ponytail bobbing in the wind.

Wheaties used their entire Instagram grid to praise the prolific tennis star as well and also wrote on Twitter: “She’s an athlete. She’s a fashion designer. She’s a philanthropist. She’s a mother. @serenawilliams is a Champion. #ShesAChampion.”
Placing top-performing athletes on the Wheaties box is like a rite of passage for them that they too hold in high regard.
Most notably Jesse Owens was the first Black man on the box. Other high-performing athletes like Michael Jordan became a Wheaties staple landing on the box cover a record 18 times. Mary Lou Retton, Lindsay Vonn, and Michael Phelps, have also been brand ambassadors, Glamor reports.

Fans were ecstatic to learn about Williams’ latest accomplishment.
“Long over due, congratulations! And there needs to be a third, fourth and fifth…plus,” one commenter wrote.
“I can’t believe it took Wheaties this long to put your image on the box. Regardless, it’s great,” another person commented.
Williams is gearing up to play at Wimbledon next week. She was upset in straight sets 6-2, 7-5 by challenger Sofia Kenin in the third round of the French Open in early June.

I kind of liked it. Although honestly, I am not a tennis fan. But this post inspired me so much that I will read more about it. I would also appreciate if you looked at this https://1xbetbd.com website. This will definitely make you happier, because they have it all in one place for your winning. Even if you are tired of sports betting you can always switch to live casino games.

Hi! I'm a fan of tennis and I love Serena Williams! She is a complete tennis player, a complete sport person, and a complete human being:) I watched all her matches. Now I follow new young players and always check tennis betting & odds online. Very comfortable and interesting.