Saturday Night Live welcomed Drake to the show on May 14th. The Toronto native looked at ease and in his element as he used his acting chops in a number of sketches. Check them all out below. OVO Sound boss and Young Money recording artist, Drake, took over Saturday Night Live on May 14th. In addition to acting in several skits he also performed "One Dance"and "Hype" off of his new album, "Views." Watch below. While there he played Jimmy in a game of Faceketball, tells a hilarious story about his father not listening to his album yet and gets meta with mini-Drake memes. 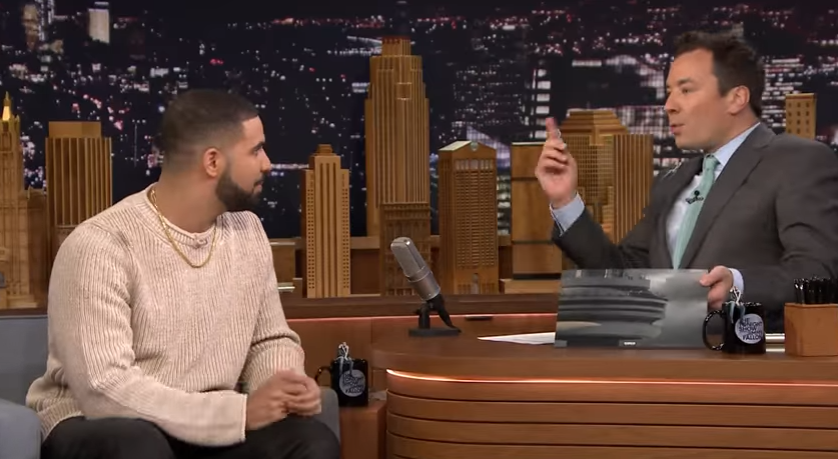 Drake is going all out to pull in big numbers for his upcoming album Views From The 6, due for release on April 29.
The Toronto rapper has opened his very own “Views” pop-up shop in New York City ahead of the album’s release. The store, located at 135 Bowery, was opened on Monday and is sponsored by Beats by Dre, so you can bet you will find a few Beats by Dre headphones in there.
Drake made the announcement on his social media page yesterday and some 800 stood in line before the doors were even opened, Billboard reported.
“Hoping everybody gets laced at the pop up in NYC today. VIEWS APRIL 29,” Drake wrote.
Drake also revealed that he only made 1000 of his custom black or white T-Shirts with the Views logo on them courtesy of fame New York graphic designer Filip Pagowski.
Fans who made their way inside the store were lucky enough to also walk out with their Views bag.
Some smart promoting by Drake and his team. Back in 2013 Drizzy also opened up pop-up shops in major cities across the U.S. including Los Angeles, Toronto, and New York for his album Nothing Was The Same. Here's some rare footage recorded in 2004 of Drake recording at ILLfire Studios in Toronto, while he was still an actor on the show, "Degrassi: The Next Generation."

"I keep my music pretty under wraps," he says in the clip. "This is gonna be a shocker to people I work with on set because nobody really knows I do anything. I really keep it to myself, but it's ironic because it's probably the biggest part of my life. I've essentially become obsessed with music." We all know how this turned out. Check it out below beginning at the 4:34 mark.

A lot of people love Chris Brown, Lil Wayne, and Tyga single “Loyal” but Drake is not one of them.

Drake took a few shots at the trio at his “Drake VS Lil Wayne” Tour stop in Illinois earlier this week.

Drake then made FUN of the song

“That’s what y’all cheering for? This n***a Tyga at the movie theater with Chris and s**t.”

Drake and Chris Brown recently ended their beef and are working on new music together. The frenemies even appeared in a recent ESPY Awards comedy skit.

Did the two fallout again or is Drake comments is all fun?

RUMOR HAS IT: LIL’ WAYNE punch DRAKE In The Face because he slept with his girl while he was in jai As the Young Money CEO and Milian made their way to their ride a Crips gang member approaches the vehicle and yells Wayne's name.

Wayne pokes his head out of the vehicle for a second to see what was going on before his security closes his car door.

Security held the guy back long enough to clear a path for Wayne's car to pull off, but he continued to talk. He identifies his set, tells the rapper to "check in," and disses Suge Knight and Birdman.

Remember the drama that took place right after Wayne was released from prison, and he punched Drake in the face? I think I know what caused the rift between them…

Sources are saying that when Wayne was locked up Drake started sleeping with Shanell, who is one of Wayne’s girls. (OUCH!!)

Now everyone knows that’s Wayne’s girl. [Lil Wayne] is not jealous over her or anything, but he thinks that was just disrespectful.

I’m thinking this drama if far from over!!

After just being released from jail, it is rumored that Lil’Wayne punched Young Money artist Drake in the face at the Wynn Hotel. Reliable source are reporting it like this:

“Here’s the info we got, from a MEMBER OF YOUNG MONEY. There’s been growing FRICTION between Drake and Lil Wayne, and last Saturday night – it BLEW UP!!!

The insider explains, [Mack Maine and Baby] set it up so that Saturday would be Wayne’s coming out party. But he didn’t want to do it. . . Wayne has some bad feelings with Drake, he feels that Drake left him out there while we was [locked up]. So Wayne didn’t want to do the concert.”

But Bryan “Birdman” Williams managed to convince Weezy to fly to Vegas for the concert. And while things looked OK on stage, they were TERRIBLE off. Our insider explained, “Wayne didn’t even say a word to Drake until that point . . . but after the concert, he disciplined him.” What does that mean. Well, allegedly [cause we aint trying to get him violated] Wayne walked over to Drake and punched him in his face. Security reportedly BROKE IT UP and escorted Wayne off the property.

Later on that night, Lil Wayne supposedly tried to meet up with Drake again, at the concert afterparty at the nearby Wynn. But security for the Wynn were told NOT to allow Wayne into the premises.”

who cares? All of them are faggots...

Comment by stacey l boutileste on August 15, 2014 at 12:09am
I think li'wayne has some serious issues he think cause he got money that all the women that get with him belongs to him.I just got one question for li'wayne is his mother a hoe cause he always calling woman hoes and b****** in his lyrics tell him to look in the mirror because that phrase don't only have to be for woman cause from what I see and hear he is the biggest hoe and b**** out there.

Comment by Big Shot... on December 30, 2010 at 7:17am
@Amy
Oh yeah thats definitely her. Certain things some people can not hide of change about themselves. That voice, that hood rat repetitive slag, that is her with out a doubt... Wow... Crazy...
And to show you how lame she was (or is), Remy was putting her on ice, over and over while she kept sweating her over and over (from her own mouth). It dont any wacker then that, Nikki's a pile of hot elephant crap....And dike rejection gotta be some kind of feeling lol....

Comment by deborah rollerson on December 5, 2010 at 10:51pm
Your page says your from America? You must have just came here. I don't believe your even old enough to have reached the conclusions you have about American men, nor women. Just saying, cause in an other blog,you make a statement about Rihana needing to leave american men alone or something to that nature. Check your facts baby before your facts check you. Okaaaaaaaaaaay?????

Comment by deborah rollerson on December 5, 2010 at 10:45pm
@ Adrien Mayers. Where do you get your information from??? Pray tell cause it sounds like you have been hanging out with some f***** up people.