Rihanna opens up about new romance.... 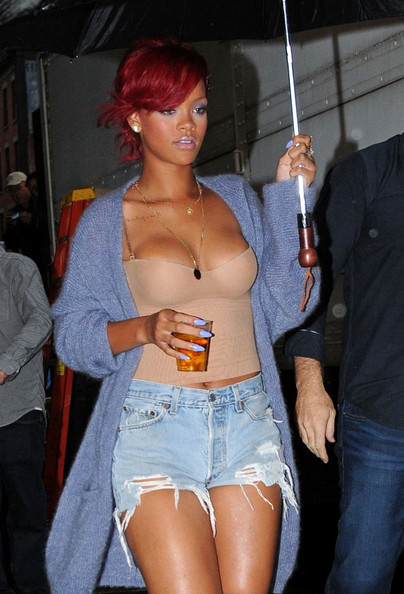 Rihanna is the poster girl for bouncing back. It's been 20 months since her heated verbal exchange with former beau Chris Brown turned violent, and she is already preparing the release of her second post-incident album, "Loud." Romantically, she is blissfully happy in a relationship with her Los Angeles Dodgers boyfriend Matt Kemp.

Rihanna is genuinely giddy this time around, she reveals in a cover story in the December 2010 issue of Marie Claire UK. Access Hollywood reported that she told the magazine, "I feel like I smile for real this time. The smiles come from inside, and it exudes in everything I do. People feel my energy is different. When I smile they can tell that it's pure bliss and not just a cover up."

The "Only Girl (In The World)" singer said she knew when her tumultuous relationship with Brown had come to an end.

"One day, I remember I was in New York at the Trump Hotel and I woke up and I just knew I was over it," she said.

But Rihanna believes the altercation happened for a reason. "God has a crazy way of working, and sometimes when stuff happens you feel like, 'What did I do to deserve this? Why was it backfiring on me?'" she said, according to an Us magazine report. "But, I needed that wake-up call in my life. I needed a turning point, and that's what God was giving to me. All [of] this terrible stuff they say to you, it breaks you down."

Brown, on the other hand, has also experienced his own turning point. Since the felony assault, his career has plummeted until recently. His introspective ballad "Deuces" reached No. 1 on Billboard's R&B/Hip-Hop Songs chart and was recently remixed with guest vocals from hip-hop elite Kanye West, T.I., Andre 3000, and Drake.

Brown is feeling better these days, he told Access Hollywood. "Everything [is] good, I'm definitely - me personally and mentally - I'm a great guy now," he said. "Definitely just a person who's promoting positivity all the time, so that's just me," he said.

Brown added that he is also working on recording music. "The new album is called ‘F.A.M.E.': Forgiving All My Enemies. Basically, just being able to witness my success, failure and success again," he said. "Being able to see me going from my best times to my worst times and being able to overcome it and growing [in]to a man, as I was doing it."

Last Saturday, Celine Dion gave birth to twin boys, but fans were saddened to learn that Dion actually lost a third child during her pregnancy with multiples. Mariah Carey and Nick Cannon shared their good news, that they were expecting a baby this spring. And Billy Ray Cyrus and wife Tish filed for divorce.

Comment by Dark Angel on October 30, 2010 at 6:43pm
Girl i've been there and a wake up call is what i needed a broken nose was the last straw for me.Now am married to a wonderful man i gave him a sweet baby boy and am happyThe only thing i remember about that guy is that he's my daughter father the last thing i heard is that the new girl is getting it to the bone sad just sad.So do you hun no matter what people say am happy for you.