There’s no easier way to make sure something goes viral than to claiming a celebrity wants it to stay quiet.
At least, that’s what one Reddit user thought when a Photoshop whiz swapped the faces of an infamous picture of Kim Kardashian and Kanye West kissing. The new image? Kanye kissing Kanye.
And with the caption “Kanye wants this photo removed from the Internet,” the post was an instant hit. After all, as one Reddit user noted, “Saying “X person wants this removed from the internet” is just the new way of begging for upvotes.”

The image itself is either a good Photoshop job meant in good fun or a smart commentary on the hip-hop star’s narcissism. Either way, “Kanye kissing himself” is already a Google search term.
So while this story follows the social media trend of bashing reality stars or looking up ugly pictures of them, what makes it interesting is the way it gained traction. After all, there’s no easier way to galvanize the Internet than to suggest a star wants something done.
There is no word on whether Mr. West has ever seen the photo or whether he thinks it’s funny or not. 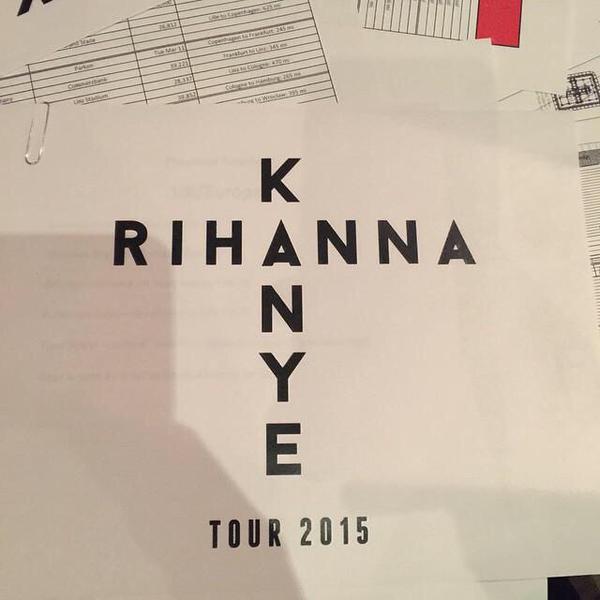 The Internet is a buzz after Complex just broke the possible good news!

The picture above was sent to them from a very reliable source and seem to confirm the rumor that started not too long ago as, last month, Rihanna tweeted out an auction that offered a package for Kanye's yet-to-be-announced 2015 tour. Starting at $15,000, the auction offered 2 tickets and a meet-and-great-for the concert, a pair of Yeezy's, and autographed tour merchandise.

Rihanna and Kanye West brought the house down when they performed at the DirecTV Super Saturday Night concert, a pre Super Bowl XLIX concert.

The exclusive event was invitation only and was hosted by Michael Strahan and Mark Cuban at the DirecTV Super Fan Stadium in Glendale, AZ.

Rihanna looked stunning in all black while Kanye West donned a camo jacket and denim.

The Bajan pop star went through a medley of her biggest hits including “Rude Boy,” “Diamonds,” “We Found Love,” and “Umbrella.”

Kanye West took the stage to perform some of his hit singles but not before performing “All of the Lights” and “Run This Town” with Rihanna.

Rihanna recently collaborated with Kanye West and Sir Paul McCartney on a new track called “FourFiveSeconds.” The trio will be performing the track at the 2015 Grammys.