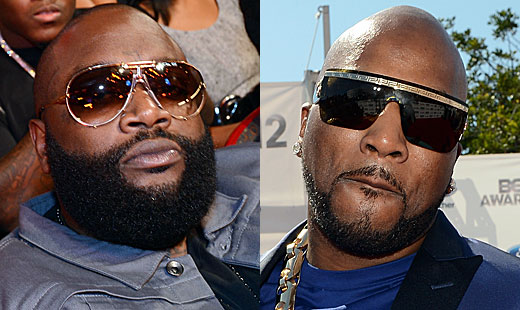 As we previously reported, a fight between Young Jeezy and Rick Ross went down backstage last night during the taping of the BET Hip Hop Awards show in Atlanta.

Despite initial reports of gunfire outside the venue, TMZ is reporting that Atlanta police say that didn't happen although a fight did take place in the parking lot. Police used pepper spray to break up the brawl. 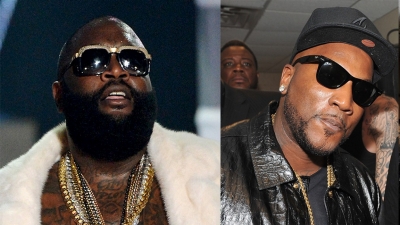 BET has issued a statement regarding the drama last night. You can read that below.

BET Networks works very hard to bring the best in entertainment to the city of Atlanta. For the past 7 years BET has celebrated the true art form of Hip Hop. Due to some misjudgment of select attendees, it is unfortunate that certain incidents took place. BET Networks does not condone any type of violence. Local authorities are working to resolve the situation as quickly as possible. Despite the actions of a few the 2012 BET Hip Hop Awards embodied the true spirit of hip hop and was not impacted at all by any incidents.  Tune in on Tuesday, October 9, 8P/7C to watch the 2012 BET Hip Hop Awards. 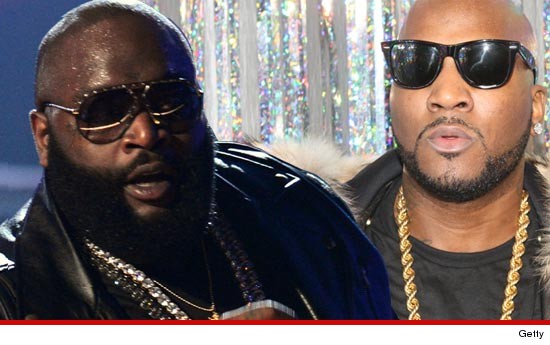 A  fight broke out backstage at the BET Hip Hop Awards tonight between Rick  Ross and Young Jeezy that resulted in shots being fired .. sources at the awards tell TMZ.
According to our sources,  Ross and Jeezy exchanged words backstage and started pushing and shoving each  other. We're told BET security and bodyguards for each of the rappers eventually  separated the two.
Our sources on the scene say that after the fight had  been broken up, a member of Rick Ross' entourage pulled out a gun while in the  parking lot and shots were fired.
We're told Jeezy and Ross are still at  the awards, which are being taped tonight in Atlanta and air next month.

A spokesperson  for the Atlanta Police Department tells TMZ, "Shortly after 7:15 pm Saturday, a  fight broke out in the parking lot at the Atlanta Civic Center (where the BET  Awards were being taped) between two groups. Atlanta Police Department officers  on scene responded to break up the fight and used OC spray in the process.  Individuals fled the scene. There were no arrests or reports of serious  injuries. Reports of shots fired appear to be untrue." Our sources maintain  shots were fired.

We're also told that 50  Cent got into it with a rapper  named Gunplay, a protégé of Rick Ross.

Can't we all just get along?

Comment by Bombahdrop on September 30, 2012 at 12:59pm
Dont seem like these rapper have enough work in the entertainment biz. Its all about ego tripping. They to feminine.

Comment by Bombahdrop on September 30, 2012 at 12:55pm
Hahahahaha @Miss Tammy and we never heard of Kenny Rogers and Garth Brooks fighting @a country award event either. This is only in Hip hop Chile. First Chris n Drake drama now next,who up next they really need to grow up.

I never idolized an a******, my idol was Bob Marley when I was growing up and I’m very proud of it however, these niggas are an embarrassment to decent black folks. You’ll never hear this kind of behavior happening at the CMA. BET want taking out of the media or black folks have to petition to have the name change because it doesn’t represent black people.

Comment by Miss Tamey on September 30, 2012 at 10:43am
Eyvette Flowers, u took the words right out of my mouth. U never hear about Al Pacino and Jack Nicholson fighting at the Oscars. I am just plain ole tired of 50 Cent and his bullying everyone, he thinks doesn't live up to his standards. I rock with Jeezy so its disappointing to hear his name involved in the mess. Rick Ross is trying so hard to be hard, its too funny! I think his whole lifestyle is from different inmates, from when he worked for corrections. Getting rich has made them dumber instead of wiser and grateful.

Comment by flores460 on September 30, 2012 at 9:37am
This is so pathetic. Grown ass men making money and still acting like a*******. This is who the youth follow and this is the reason why the youth are out of control. We have to stop supporting and idolizing these pathetic bums.