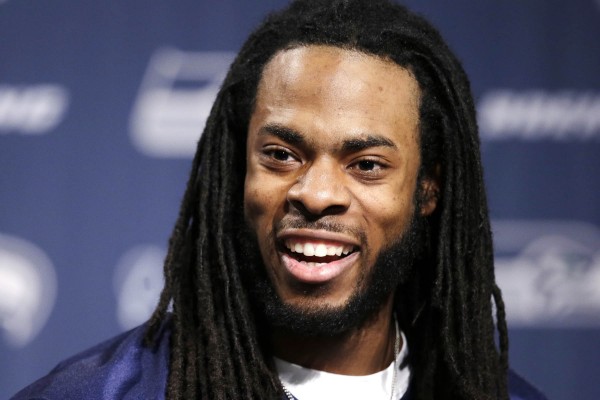 Seattle Seahawks cornerback Richard Sherman does not believe the NFL would act as decisively as the NBA if a team owner were caught making racist comments. Sherman cited the controversial name of the football team in the nation's capital as evidence that the NFL would not have issued a lifetime ban to a team owner caught making bigoted remarks like those that earned Los Angeles Clippers owner Donald Sterling exile from the NBA.

"No I don’t," Sherman responded when asked by Sean Gregory of Time.com if NFL Commissioner Roger Goodell would react to an owner's racist comments like NBA Commissioner Adam Silver. "Because we have an NFL team called the Redskins. I don’t think the NFL really is as concerned as they show. The NFL is more of a bottom line league. If it doesn’t affect their bottom line, they’re not as concerned."
The outspoken Stanford University graduate told Time.com that he hopes Sterling's lifetime ban from the NBA will help get the discussion about changing the Redskins name started again. Ever since Silver announced the punishment for Sterling, some have tried to start the conversation surrounding the name change.

Senate Majority Leader Harry Reid (D-Nev.) urged the NFL last week to respond to racism like the NBA did and force Redskins owner Dan Snyder to change the team name.
"I wonder today ... how the leadership of the National Football League, the NFL, that money-making machine -- I wonder if they have taken notice of the NBA's decisive action," Reid said. "How long will the NFL continue to do nothing, zero, as one of its teams bears a name that inflicts so much pain on Native Americans?"

Sacramento Mayor Kevin Johnson, who helped the NBA players' union during the Sterling scandal, also joined the conversation. The former NBA player thinks a new name for the Washington football team "should strongly be considered."

Comment by Ruff de Gehto Travler on May 12, 2014 at 9:31am
@Vaughan I see what your saying but all except the Atlanta Braves because they are using the actual name of the tribe I would not consider the name of the team racist , but calling the Native American an Indian is the racist term and so it Redskin but , Redskin did turn to mean more fear then anything us as Black's Also Identified with the term Redskin in those times just can't remember the battle were it was documented Blacks fought right along side the Native Americans in battle under the same Term!!!! What a lot of people don't realize dispite Hollywoods version of the west Pale skin and Red Skin was taken out of context to help sell movies but the term Redskin struck fear into the colonized whites !!!! I mean to be honest don't know much more then certain readings and History classes but Just like I would not walk up and call a fellow black a n***** I would not walk up and call a Native american a Indian or a red skin out of respect !!!! But the Washington Redskins was more picked out of respect ( though demented) it's not racist!!!! The pilgrims called them Indians from the landing of Christopher Columbus Who swore he landed in India and the name stuck!!! White people go figure~~~~
-----------------------------------------------------------
Comment by vaughn mitchell on Friday

He is right. @ Ruff de Ghetto Traveler, The Washington Indians , is not a degrading name, you idiot, The Atlanta Braves name is not racist, the Cleveland Indians, name is not racist, Redskin, is racist, name, that is like calling a black man the N, word!!!

Comment by thomas barkley on May 10, 2014 at 1:59pm
Hi gd morning, there rules and regulations along with conduct it goes to players coaches and owners, it's the same as a football player if caught riding a bike he will be fined. Same as an athlete even an employee are randomly drug test... This is not a democracy here people must understand that, blacks are punished harshly and whites are known to get a free pass, but blacks are so programmed, that when ever a white person does something they will defend that person. Whites are quick to call a black person an animal when they are accused of a crime, but when it's a white person, it's something mental that affected them in the past as a child, so now we have to help them, and blacks falls for that all the time, always feeling sorry for a white person... Because blacks are programmed. Gaming, M. Vick and the dogs, Burges shot himself, cock fighting, blacks hunting for ivory, these are all black gaming... Hunting and killing turkey, rabbits crocks, moose, people, gold and diamonds using black labor in the worse conditions ever etc. done by the white man and its glamorous even have reality shows on tv. Fight against the white man we are terrorist, but he becomes a private special force,militias, IRA etc. just compare the two and see how the public reacts,

Comment by Bombahdrop on May 10, 2014 at 10:29am
Yessss his wife talking bout suing this one and that one for control of the clippers. I'm like how lolz the man was banned for life I thought automatically hes stript of the clippers as well but it doesn't seem to be that way he owns that team with his own money and he has or should I say is forced to sell. Smfh I dont get it.

Comment by T. Williams on May 10, 2014 at 8:48am
Thanks Bombahdrop. Likewise Barkley and apology accepted

Comment by thomas barkley on May 9, 2014 at 11:41pm
Bombadrop, well if he doesn't sell I don't think it will be a clippers cuz there are also accusations that his wife been calling blacks and Hispanics names and she done lots of illegal things to the tenants at they apartments, so with the ban alone him and his wife and family are still making money from the team profits. So if he don't no one will want to play and fans will not support.

Comment by Bombahdrop on May 9, 2014 at 10:40pm
Donald's punishment for the racist comment was
"Banned 4 Life" so if he doesn't sell his team like everyone is urging him to do what then will there be a clippers

Comment by thomas barkley on May 9, 2014 at 9:24pm
Hi Williams I don't know you and you don't know me, I apologize and very sorry for calling you names and trying to belittle you. I hope you accept my apology, this is just a blog on our views on everyday issues.

Comment by thomas barkley on May 9, 2014 at 9:11pm
Williams, for your info I have a business and in the summer I'm launching another business ok, I'm working with whites all day long, but I know if I had nothing to offer they won't be no need for me with them, and I'm sure I I have more white associates than u have or will have, but u think that that can change who I am? No... Rite now I have a few whites coming over to my house just to hang then tomorrow I have a golf game with more of them but what, they know me and how I feel about them, and I know how they feels about me. It's all business, what I can get from them and what they can get from me. So if you Ms.Williams think that having a business give you the right to talk on this blog as if people here are inferior u and your white racist friend, sorry babe, look into the mirror and u will see a dumb ass stupid idiot, who look to the white man as superior and u as inferior, maybe you should change the color of your skin, sorry u probably bleaching.... Lol