The manager of a restaurant in Baltimore is on indefinite leave and its owners are apologizing after video from a black customer showed that her son was denied entry due to the dress code, while a young white boy wearing similar clothing was allowed inside.

Marcia Grant says she and her son Dallas went to Ouzo Bay in the city’s Harbor East area but were turned away because he was dressed in “athletic wear” – basketball shorts and a Jordan T-shirt. Marcia filmed herself asking the manager repeatedly why her son was in violation of the dress code when a young white boy, which she showed on camera, was allowed to dine in similar clothing. The manager never came up with a good answer.

“We had to leave. They would not let my son in,” she told The Shade Room. “He’s 9 years old. It was so hard for him. He goes to a school that’s about 70% white. They always teach the kids they are the same. It was really hard for Dallas to see a kid that looked like one of his friends at school sit and eat there and he couldn’t.”

The company that owns Ouzo Bay, Atlas Restaurant Group, apologized Monday evening and said the manager in the video has since been placed on indefinite leave.

Today, we learned of an incredibly disturbing incident that occurred at one of our restaurants in Baltimore, Ouzo Bay. We sincerely apologize to Marcia Grant, her son & everyone impacted by this painful incident. This situation does not represent who or what Atlas stands for. 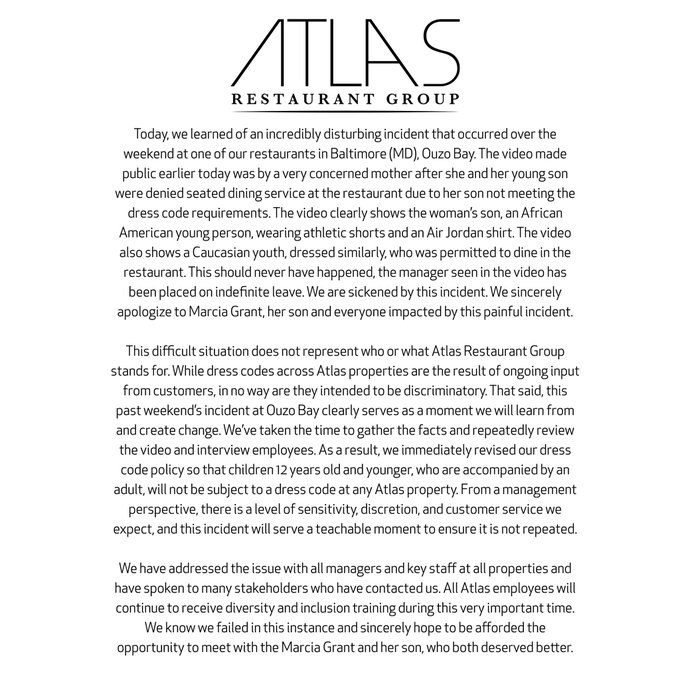 2,454 people are talking about this

Watch a report about the apology below.