Registered Nurse, 65 Accused Of Attempted Murder For Injecting FECES Into Her Husbands IV After His Heart Surgery 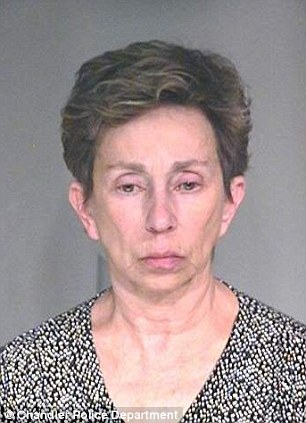 An Arizona woman has been charged with attempted murder after police say she injected fecal matter into her hospitalized husband’s IV line.

Rosemary Vogel, of Sun Lakes, was arrested Thursday after a nurse caught the 65-year-old handling her husband’s IV line, which was found to contain a brown substance, police said.

A hospital lab test identified the matter in the IV line as feces, and a trace amount of the same brown substance also was found in the needle of an otherwise empty syringe found in Vogel’s purse, according to police.

When it was searched in the hospital, Vogel’s pocketbook contained a total of three syringes, including two with a clear liquid, police said.

Records showed that Mrs Vogel is a registered nurse who formerly worked at the hospital, Chandler Regional Medical Center.

Investigators plan to conduct forensic tests on all the materials involved over the next week or two, police Sgt. Joe Favazzo said.

However, the hospital had to test the brown substance in the IV line immediately for treatment purposes.

‘The lab came back with fecal matter,’ he said.

The incident occurred after the 66-year-old man had undergone a heart procedure. He’s expected to survive that, as well as the alleged attempt on his life. Caught in the act: Nurses at Chandler Regional Medical Center, where Vogel used to work, found the woman manipulating her husband's IV

Police have yet to determine the motive behind the attack. Mrs Vogel declined to be interviewed by police and asked for an attorney.

According to a police report, Mrs Vogel was sitting with her husband in a Chandler Regional Medical Center recovery room at around 1.30pm Thursday following a procedure on his heart.

A pair of nurses walked into the room and noticed the wife in the act of handling her husband's IV line, which caused an alarm to go off.

Herself a registered nurse, Rosemary Vogel told her former colleagues that the IV line needed to be flushed.

That is when another hospital staffer discovered a brown substance in the medical equipment and removed the line from the patient’s arm, noting that the Iv smelled like feces, the station WFSB reported. Contaminated: A hospital staffer observed that the 66-year-old patient's IV line contained a brown substance and smelled of feces

The nurse went for help, and upon her return she found the 65-yar-old wife trying to empty the contaminated IV bag into the trash, only to have one of the hospital personnel snatch it out of her hands, according to the report.

The suspect initially had faced a charge of aggravated assault, which was later upgraded to first-degree attempted murder.

@The Future only an idiot and those who believe in that love crap would tell their spouse how much their life insurance really is, if you really love someone she is going to get it anyway once married, but while alive lie your ass off, if its half of mill, tell her its only 10k i used to live with my baby mom when she graduated and became an RN at licha, i found out she had a life insurance on both of us i swear i made her pick up the phone and cancel the policy than i spoke to the rep and asked her to put the manager on the phone and threaten that i would write a letter inform them that it was illegal to issue a policy without my permission and signature, i got the letter Notarized mailed them a copy and give another copy to my sister, in case anything happen that money cannot be cashed if a check should be issued it  should be to my daughter, trust no one all those people who claim their in love will find out the hard way, we are living in a time where trust and love dont exist, it takes one financial problem for your partner to see you as opportunity, im staying away from all that crap

Damn you can't even let your wife know you have life insurance anymore....damn they try to kill you now a days, quick note: let it be a surprise.hahahahaha!!!!

Comment by DaRadiant1 on February 2, 2014 at 9:33am
Oh she gonna get some serious time for that! I truly believe she did it for the insurance money.