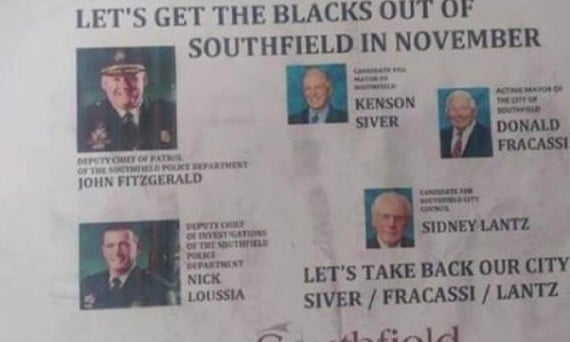 The flyer that has been distributed in the Detroit suburb of Southfield. Photograph: Ryan Felton

A racist political flyer has begun circulating in a Detroit suburb, calling on voters to “get the blacks” out of office this November.
The flyer, distributed by an anonymous and still unknown source this weekend, included photographs of white politicians vying for several positions in Southfield, Michigan, a 70% African American city that borders Detroit to the north. Two of the officials in the flyer – which states, “Let’s get the blacks of Southfield in November” – are not running for office this fall.
On the back, a photograph of Trayvon Martin, the unarmed black teenager from Florida who was fatally shot in 2012 by George Zimmerman, is sandwiched beneath a message that reads: “Zimmerman was right. We will never stop thugs like this.”
The existence of the flyer was first reported by local Fox affiliate WJBK. It quickly spread across social media, where politicians featured in the circular responded on Monday, saying it was “false and outrageous”.
A second flyer, obtained by local ABC affiliate WXYZ, shows a police officer wearing a white Ku Klux Klan hood, pointing a gun at the temple of a child who appears to be holding a package of candy. Martin was said to be holding a bag of Skittles when Zimmerman approached him on 26 February 2012.
Ken Siver, a candidate for mayor whose photo and name appear on the flyer, said Southfield had a reputation as a diversity community that “welcomes all people”. That was why he was “considerably upset to learn that someone would produce something like this and make these false and outrageous complaints, not to mention to exploit and insult the memory of Trayvon Martin”, he wrote in a statement on Tuesday on Facebook.
“Truthfully, I am more saddened by the flyer than upset,” Siver said. “It is sad because this is not the Southfield we know. In Southfield, we celebrate our diversity and welcome to all people.” Southfield, a city of 73,000, is estimated to be 70.3% black, according to recent census estimates.
Siver added: “I have to assume that this is a desperate attempt to smear my name.”
As reports of the flyer spread, the city of Southfield also released a statement, saying no elected officials or staff condone “this type of negative, deconstructive and harmful propaganda”.
“We as a community are appalled that this type of reprehensible material has been distributed,” said Mayor Donald Fracassi, in a statement. “We stand together united as Southfielders against racism of any kind.
A spokesperson for the city did not respond to requests by the Guardian for comment.

damn cops, boy when their day come, what joy

Comment by Jerimiah 1:4--10 on August 29, 2015 at 10:48pm
This is just another signiture out of many that a great percentage of whit American have declared war on the American negro

Comment by Ab Gai on August 28, 2015 at 10:07am
Dam it!
This is why it's up to the black community to go by those foreclosed homes in detroit up for auction...before the chinese buy up all. I wonder if these dumb ass white folks realize that the chinese are buying up whole neighborhoods? Hmmm.

Comment by team-night-vision-surverillance on August 27, 2015 at 1:29pm
they should B a shame of them self.#colorblind

The racists are just showing their true colors!