Protesters Gathered Across Street From Buju Banton's Performance--But Was There Anything To It? 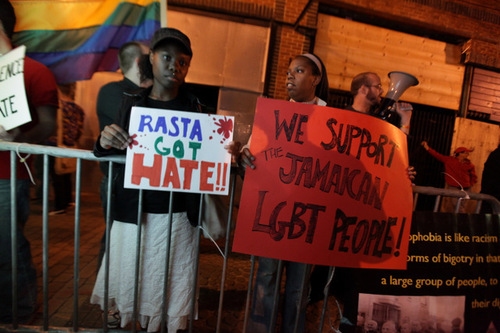 According to Yard Flex, Reggae artist Buju Banton didn't realize "f*****" had become a bad word.
At least, that's the story according to friends and colleagues of the artist, who stood in front of Trincity/Palm Beach Club last night, watching the protesters rally across the street.

As we mentioned yesterday, protesters affiliated with various gay rights groups had prepared to protest the artist's appearance in Deep Ellum last night. And sure enough, dozens of people holding flags and signs stood behind police barricades and shouted over Main Street at the club during Banton's show.

"Attention Palm Beach Club!" said Daniel Cates, co-founder of Equality March Texas, as he lifted a loud speaker to his mouth. "By allowing Buju Banton to perform this evening, you are promoting the brutal execution of lesbian, gay, bisexual and transgender people. We will not stand for murder music in our community."

Leaning against the club's wall was Gramps Morgan, who was on tour with Banton as his opening act.

The ugly truth? Many of the protesters hadn't listened to Buju Banton's music. They had only read about the inflammatory lyrics on various Web sites--and they believed them.

"I don't listen to his music," said Lividia Violette, 24.

Another activist, Rick Vanderslice, said he had only read about the lyrics online on a gay rights activist site. "I've not listened to them, but seen them in print."

And finally, Blake Wilkinson of Queer LiberAction, said he also read about on-line: "The lyrics come from news sources which I thought were reputable," said Wilkinson.
Back across the street, Morgan waved off the protest.

"They have no idea what they're protesting about," he said. "They just got news because they're united. It shows you how powerful unity can be. They got news from their heads and they're just rolling with it."

But several news sites were quoting Banton as telling a Jamaican newspaper that "the war between me and the f*****" seemed far from over. Morgan didn't deny that Banton had indeed said that--just that the meaning of his words had been twisted.

In San Francisco, Banton had met with the gay community. Both sides had agreed to bridge the culminating divide. However, later that evening, protestors showed up to Banton's performance regardless. And that's when Banton commented about the continuing war.

The use of the derogatory term, however, was harder to explain. The group outside of the club, mostly from the Caribbean, admitted that Jamaica was more or less a "homophobic island."

In fact, during a conversation with the evening's DJ, the word came up again. When asked why he chose to use the term, the man seemed confused.

And this is the same explanation Morgan gave for his touring partner Banton.

"[Banton] had a meeting with his manager and some other people and he was educated about the word," said Morgan. "He said, 'I didn't know it offended them.'"

Comment by kimisha on October 26, 2009 at 10:40am
OMFG,THIS IS GETTING OUT OF HAND.DON'T YOU PEOPLE HAVE ANYTHING TO DO WITH YOUR LIVES?
HE HAS A RIGHT TO HIS OWN OPINION.YOU DON'T LIKE HIS MUSIC SO WHAT BUT TO TRY AND STOP HIS CAREER IS SO WRONG.GOD GAVE US OUR OWN MIND TO CHOOSE.

Comment by keisha Martin on October 26, 2009 at 9:01am
I am a born Jamaican, and am one that oppose hate crimes to humanity..but what happen to freedom of speech, and by the way Buju songs was over 10 years ago , he has mature and grown and now realize how this has brought controversy.let me educate you on a few things just in case you didn't know. In Jamaica it is illegal (as in breaking the law, no different from murder, rape etc). to practice buggery which is how the practice that you choose to engage in is defined. Secondly if Jamaicans were so bent on murdering you as you say there wouldn’t be any gays in Jamaica would there? and third quit forcing us to accept your lifestyle when you are not trying to accept ours. and for Christ sake he was speaking metaphorically, where is your sense of reasoning and fearness, people all across the world is dieing from hunger and disease. JAMAICA WILL CHANGE ITS LAWS WHEN WE ARE READY, DON’T FORCE US TO DO SO.

Comment by Carl on October 25, 2009 at 12:30pm
Ah yes, the saga continues. There are those who say that Buju "isn't homophobic" and then there are others who didn't know that the term "f*****" is not derogatory. Well, it's very convenient for people to have selective amnesia and decide who said what and what they meant. The truth is; Jamaica is virulently homophobic, Buju and others of his ilk promote violence against gays, and some people just can't accept the fact that gays; were here, are here, and are here to stay. And, as a parting note; these naysayers must look in their family.......because somewhere there's a gay person..........or perhaps two or three.

Comment by allspice on October 23, 2009 at 11:52pm
these are the things that will transpire because people in society refuse to standup for what they beleive in,and if we you dont stand for sumthing you will undoutedly fall for anything as it is evident right now.these protesters dont even no what they are protesting for & it is up to us as the ones who no right from wrong to enlighten there darkness with a protest of our own so as to let them no that no one should engage in homosexual activities its not natural and we dont want it in our society and amongst our blood-claaaat kids a wha do dem.homosexuality is a mental illness just like any other mental issues that people suffer from every day and until these sick people admit there ilnesses and get help to make a contious effort to change we will only see a rise in these ungodly life stiles of a very few of our sick brothers and sisters.personally i wont advocate violence against f*** but sumtimes a good raas lick cros di head can realy straighten out ur thoughts if u no wat i mean

Comment by martin wadada on October 23, 2009 at 3:08pm
I don't have to read this article!!! these devils must be stop by any means, the time has comje to start take action, because the are totallly wrong, them might break SHABBA RANKING but them can never shake BUJU BANTON, there is a legal action to find...they are bring up something that is not on BUJU mind for the longest time....them must stop stop stop....Jamaicans will never give in to EVIL...if them hurt BUJU BANTON, then the world will see the powers of GOD ALMIGHTY people.....none of Jamaica slave fighters works are in vain...if blood must run then let it be, there is no way RASTAFARI give in to EVIL, so finally SATAN ARMY A GET BRIGHTY., them can never break what Jamaica stand for MAN TO A WOMAN, AND WOMAN TO A MAN, WE BELIEVE IN FAMILY MOTHERS AND FATHERS, I NEVER SEE A MALE COW CLIMB ON ANOTHER MALE COW YET, OR A MALE GOAT ON ANOTHER MALE GOAT, THEY ARE VERY LITERATE PEOPLE, IF THEY DON'T LEAVE BUJU BANTON ALONE THEN THEY WILL EVENTUALLY PAY THE CONSIQUENCES GOOD OVER EVIL IN WHATEVER FORM HE OR THEY COME IN,,,THE SWEETNESS BETWEEN A MAN AND A WOMAN CAN NEVER BE BROKEN......RASTAFARI LIVE!!!!!!!!!

Comment by rassmass on October 23, 2009 at 8:29am
respect is to not say or do anything to offend another
rasta is not a respector of people but of principle
the faci them can take offence as much as they offend us
as ras i know i offend many with my looks and smoking and loud music +
many have discriminated against rastafari
but rastafari dont discriminate we lick out
we verbally retain the right to say what we dont like and what we promote
who want to take offense have that choice to live with
but you cant still listen to reggae and have sex with what you like
it dont bother we beyond a subject content