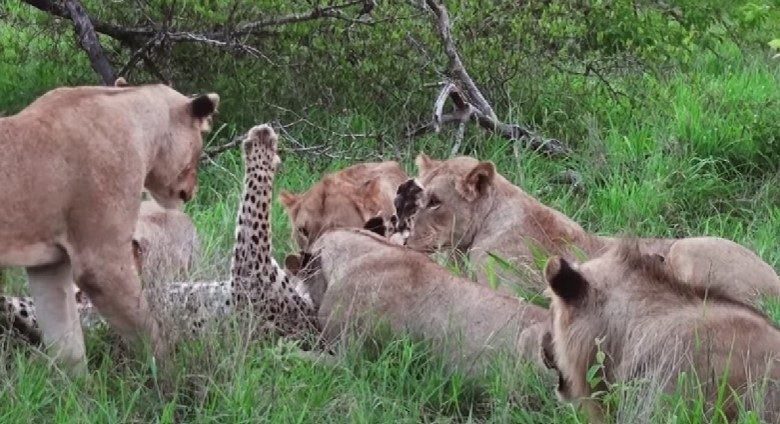 A video of a leopard’s final moments was captured on camera and narrated by who seems to be the man behind the camera.

Partially blocked by the foliage, the camera barely captures the leopard running away and taking refuge in a tree after being spotted and pursued by a lion. The cameraman repositions to get a better look at the scene which shows the leopard stuck in the tree with a lion lurking at its base.

Speaking on the predicament of the leopard, the narrator states, “this is quite a uncomfortable situation for this leopard. Obviously, he’s been treed by this lion pride.” Making a last-ditch effort to escape despite the presence of the lion below, the leopard jumps from the tree.

However, the first lion had been joined by others to total around a dozen, which made it harder for the leopard to find any room to get away. Surrounded, the cornered leopard begins to scramble to find some leeway. Unable to do much in his crisis, the leopard flails around on its back, getting dragged and attacked by various lions in the group.

The relentless assault continues, life and energy draining from the ambushed animal as the minutes pass. The leopard, unable to get up or breathe properly, is at the complete mercy of the king of the jungle who clamps its jaws around its neck.

Although finally dead, a member of the group remains, uses its paw to check its state, and latches onto the leopard’s neck once more for good measure. The narrator says, “this is just the lioness asserting dominance.”

Watch the video below: