U.S. President Donald Trump speaks during a news conference in the Rose Garden of the White House in Washington D.C., U.S. on Tuesday, April 14, 2020. Trump said he instructed his administration to temporarily halt funding to the World Health Organization, following up his claims that the international body has failed to share information about the coronavirus pandemic. Photographer: Stefani Reynolds/CNP/Bloomberg
*President Donald Trump signed an executive order on Tuesday invoking the Defense Production Act to keep meat processing plants open, despite outbreaks of the coronavirus among workers and a growing string of deaths.
The executive order also applies to plants that have already closed, which will have to re-open with healthy workers, according to Yahoo.  The federal government will reportedly provide workers with protective gear and guidance.
“President Trump is signing an Executive Order providing the authority to ensure the continued supply of beef, pork, and poultry to the American people,” the White House said in a statement.
“Under the order, the Department of Agriculture is directed to ensure America’s meat and poultry processors continue operations uninterrupted to the maximum extent possible.”
The move comes after Smithfield, which is stationed in Sioux Falls, South Dakota, and is one of the largest pork processing facilities in the country, shut down temporarily after over 200 employees contracted COVID-19.

President Trump ordered meat packing plants to stay open, after many closed because workers got sick.

At least 20 have died from COVID-19. Unions say staying open will endanger more, and wish Trump "cared as much about the lives of working people as [he] does about meat." 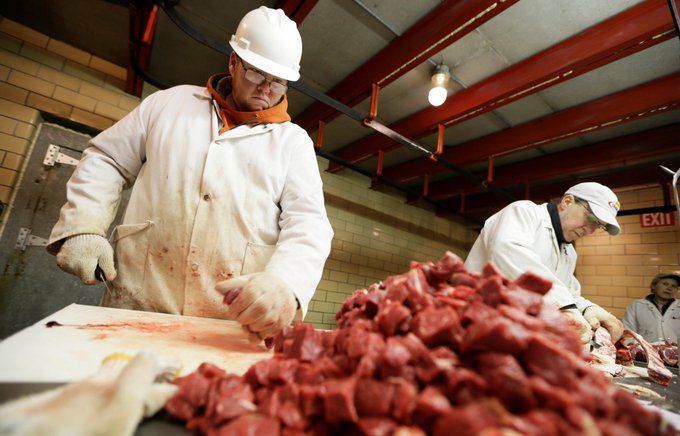 633 people are talking about this

Last week, meatpacking giant Tyson Foods announced the temporary closure of its plant in Pasco, Washington state, and chairman John H. Tyson warned in full-page newspaper advert that a meat shortage is on the horizon because “food supply chain is breaking.”

“At least 20 meatpacking workers have tragically died from coronavirus while more than 5,000 workers have been hospitalized or are showing symptoms,” said United Food and Commercial Workers International Union (UFCW) president Marc Perrone said in a statement.

“While we share the concern over the food supply, today’s executive order to force meatpacking plants to stay open must put the safety of our country’s meatpacking workers first,” he added.

“Simply put, we cannot have a secure food supply without the safety of these workers.”

Meanwhile, unions have reportedly fired back at the bid to secure U.S. food supplies, by saying the White House is jeopardizing lives and not prioritizing workers’ health.

Comment by E Peters on May 4, 2020 at 12:35pm
Instead warming about shortages he should have mandated that everyone wear proper protection while working if the plan was to remain open!!