Donald Trump faced yet more humiliation after he attended Game 5 of the World Series - and was booed by the crowd.

The game was held at the Nationals' home in Washington, D.C., but when the jumbotron panned to Trump, who attended alongside fellow members of the GOP, the crowd booed him before launching into chants of "lock him up." 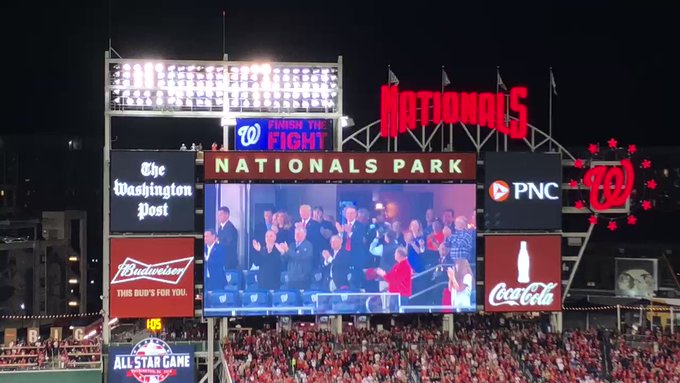 The chant mirrors Trump's supporters "lock her up" chants to Hillary Clinton during the 2016 elections.


Trump is currently at the center of an impeachment inquiry after he tried to coerce the Ukranian president to investigate former Vice President, Joe Biden, who is likely to face Trump in the 2020 elections. It is even reported that Trump threatened to withhold aid to the country if they did not oblige him.

Every president, except for Trump, has thrown out a ceremonial first pitch, either for Opening Day, the All-Star Game or the World Series. President William Howard Taft started this custom back in 1910.