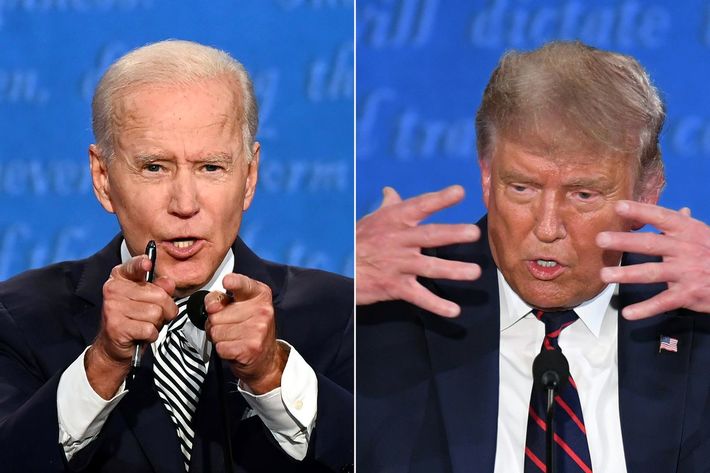 The first presidential debate between President Trump and Joe Biden featured a chaotic series of bitter exchanges and name-calling, with the president repeatedly speaking over his Democratic rival and the moderator struggling to maintain control of the 90-minute affair.

"Will you shut up, man?" an exasperated Biden said in a comment that was emblematic of the tumultuous nature of the debate, which was held in Cleveland, Ohio. "It's hard to get any word in with this clown."

Moderator Chris Wallace of Fox News struggled to maintain control as he peppered the candidates with questions about the Supreme Court, the economy, the coronavirus pandemic and more. He repeatedly admonished the president for speaking over Biden and disregarding the rules both sides had agreed to.

The president leveled barrages of unfounded accusations against his Democratic rival and his family, invoking his son Hunter Biden's work in Ukraine and bringing up the younger Biden's history of drug abuse. Mr. Trump declined to condemn white supremacist groups and defended his response to the coronavirus pandemic that has claimed more than 200,000 American lives, trying to portray Biden as a socialist who isn't equipped to occupy the Oval Office.

Biden, for his part, tried to direct his answers to the audience watching at home. He called Mr. Trump "the worst president America has ever had," blaming him for bungling the response to the pandemic and fueling racial divisions amid recent protests against police brutality.

"This is a president who has used everything as a dog whistle to try to generate racist hatred, racist division," Biden said.

The two candidates are scheduled to meet next in two weeks, on October 15, for the second debate in Salt Lake City, Utah.

Comment by vaughn mitchell on October 1, 2020 at 10:59pm
The proud boys won. They recruited alot more racist white people with guns to join their cause, to kill more black people on the behalf of racist Trump.

Comment by vaughn mitchell on October 1, 2020 at 4:54pm
Well black america, you better arm yourself, cause the crazy president told the racist group "proud boys, to be on stand by. He want a race war.