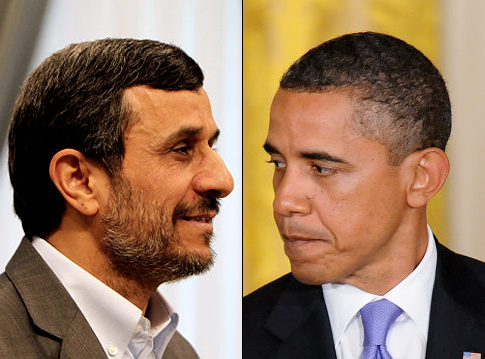 WASHINGTON - President Obama hammered the Iranian government Thursday for "dangerous and reckless behavior" in backing a plot to assassinate a Saudi Arabian diplomat.

The President insisted the U.S. has slam-dunk proof that Tehran hatched the plan.

But he said there is ironclad evidence "there are individuals in the Iranian government who were aware of this plot."

"We wouldn't be bringing forward a case unless we knew exactly how to support all the allegations contained in the indictment," Obama added.

"We have contacted all our allies (in) the international community and laid the facts before them...there won't be a dispute that this is in fact what happened."

He vowed the U.S. will press for even tougher sanctions against the Tehran regime "to make sure that Iran is further and further isolated and that it pays a price for this kind of behaviour.!"

The Obama administration believes even countries not normally allied with the U.S. will be given pause by Iran's willingness to plot murdering another nation's diplomats, a blatant disregard for international protocols.

"This is not just a dangerous escalation, this is part of a pattern of dangerous and reckless behavior by the Iranian government," Obama said.

Reply; There is such a disdain for the American Public by its own Government that, instead of addressing the problem that has caused its Citizen to march on "Wall Street", they have pretended that they does not even exist.

But is again telling you to once again take up Arms to go and die fighting for Democracy against those that will tell them the Truth.

Look at the face of both leaders and you will see the face of one whose reflection is that of a true Man, and one that looks like a Boy.

I did not know that you go to war against someone whom you alleged was planning to commit a criminal act, rather than a man that actually committing the Act?

How many People died on both sides in the War against Iraq because they alleged Sadam had weapons of Mass Destruction.

Who have ever risen up against the Divided States of America for having the most weapons of Mass Destruction? Their arrogance is their own Destruction.


M L King was not an alleged assassination; it was an Assassination by the Divided States of America, maybe the President is ignorant of this. You spit in the sky and now it has fallen in your eyes. For the Life of All Living Things the Earth will be rid of Warmongers.

Those that have made War their Love will have to be removed from the Earth, and it will be done not by the weapons of their own making, but by the Author and Giver of Life who cares nothing about the Divided States Of America and their Arrogance of Might.

For an Army is on the March that has removed all the Great Civilization from the Earth before, and is about to remove this one for the benefit of all Living Things on Earth.

Everywhere that the Divided States of America have been all that they have left is death, poverty, famine, destruction and suffering in the name of Democracy.

They are currently in Libya because they allege that its Government was killing unarmed Citizens yet they  and their (all-lies) Allied have stood idly by and watch Syria kill thousands of its Citizens that are unarmed!

Now in their malice because of the Truth spoken by the Iranian President in the UN they are now creating another pretext for War as if they are some ordained God of this Earth.