Ronda Rousey to Conor McGregor, ‘You Don’t Have to Get Arrested to Sell a Fight’

Ronda Rousey says Conor McGregor crossed the line promoting UFC 229 — and injured her friends in the process — telling TMZ Sports no one should break the law to sell a fight. 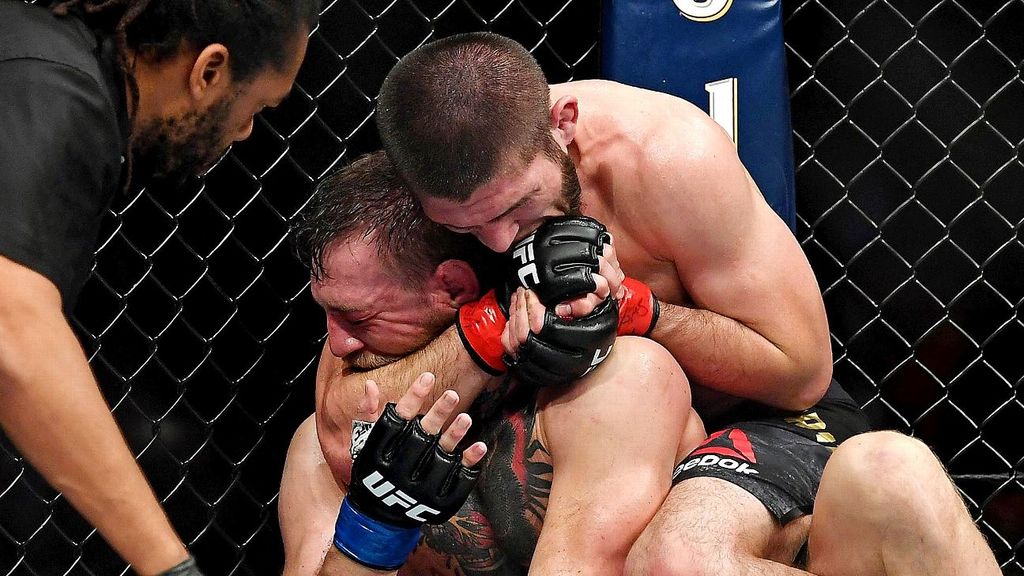 A brilliantly contested lightweight title fight between Khabib Nurmagomedov and Conor McGregor was marred by an ugly postfight incident that resulted in the arrests of three members of Nurmagomedov's team Saturday night at Las Vegas' T-Mobile Arena, according to UFC president Dana White.

Nurmagomedov (27-0) defended his 155-pound championship at UFC 229 by submitting McGregor (21-4) at 3:03 of the fourth round via rear-naked choke. Immediately after the bout, Nurmagomedov jumped over the Octagon and got involved in a fight with Dillon Danis, a Bellator welterweight who also is McGregor's jiu-jitsu coach.

UFC president Dana White said members of Khabib Nurmagomedov's team were "in big trouble" after a brawl broke out following his victory over Conor McGregor on Saturday night.

Before UFC 229's main event between Khabib Nurmagomedov and Conor McGregor, a multitude of undercard fights had major implications.

Moments later, two men jumped into the Octagon and began throwing punches at McGregor, who was still recovering from the contest.

White said he had spoken afterward with McGregor, who told White that he would not press charges. White said authorities had released the three members of Nurmagomedov's team late Saturday night.

Still, White told ESPN that it was "a very bad night" for the UFC and that Nurmagomedov could earn a suspension.

"Khabib diving over [the cage] was ridiculous," White said. "You know, you just won a great fight, you fought brilliantly, you're about to get the belt on and people are going to respect the fact that you fought well and you won the fight. And instead, you dive over the cage and start this huge melee with Conor's corner.

"I actually didn't allow [Nurmagomedov] to get the belt put on because I knew what was going to happen when we did it was people were going to throw whatever they had into the Octagon, so let's just get him out of here. ... Sure enough, as soon as they started going through the tunnel, exactly what I knew was gonna happen. I was like, 'We'll be lucky enough just to get him out of here without the belt.'"

The events made a mockery of what was otherwise a hard-fought, back-and-forth championship fight at the highest level.

Nurmagomedov, of Dagestan, tried to take McGregor down in the opening minute of the fight. He managed to get McGregor to a seated position on the floor, but McGregor did well stalling him there and landed several elbows to the side of Nurmagomedov's head as they jostled for position.

In a shocking moment, Nurmagomedov briefly dropped McGregor with a right hand early in the second round. As McGregor scrambled to get back to his feet, Nurmagomedov launched into a flying knee attempt and then used the opportunity to take McGregor down. Nurmagomedov spent the majority of the round in top position, working ground and pound and looking for a kimura.

McGregor, of Dublin, Ireland, stuffed Nurmagomedov's early attempts to get it to the ground in the third and went to work with his offense. McGregor scored good knees and punches to the body after a stuffed attempt, and he popped Nurmagomedov's head back with an uppercut.

Entering the fourth round, McGregor was bleeding from a small cut near his left eye. He looked tired, and Nurmagomedov executed an outside trip to get him to the floor. From there, it was a familiar sight, as Nurmagomedov did what he has done so often: passed guard, moved into side mount and eventually got the choke.

The fight was the culmination of a rivalry that has been brewing for several years. It hit a boiling point in April, when McGregor attacked a bus Nurmagomedov was riding in at Barclays Center in Brooklyn, New York.

Both men said they would not respect each other after the fight, regardless of the outcome.

It was McGregor's first bout since he won the lightweight championship in November 2016. He fought Floyd Mayweather in a boxing match in August 2017, and the UFC stripped him of his belt for inactivity in April.

McGregor tweeted he was looking forward to a rematch: