Drake is no stranger to funny memes, some of which can even go as far as being cruel. While some memes have nothing to do with the artist, it seems that the Drake archives are about to get a new round of memes, and it all has to do with hot sauce.

The rapper has been trending since this week after an unconfirmed report claimed that an Instagram Influencer was going to sue the rapper after a spicy night went wrong.

According to the report, Drake and the influencer had a night of fun, and a condom was involved. However, the rapper’s secret for killing his sperm was revealed after the influencer allegedly deceptively tried to use the contents of the sperm to insert into herself, possibly to trap the “Certified Lover Boy” with a celebrity baby and guaranteed child maintenance.

However, Drake proved that he is indeed ahead of the game and has thought of every possible scenario and even had a solution: pouring hot sauce into the contents of the condom before disposing of it. The influencer reportedly suffered burns to her genitals and threatened to sue the rapper.

Drake has not responded to the rumors and has posted his usual cryptic captions.

That has not stopped his friends, including one-time critic Snoop Dogg from trolling him with a new meme.

The happily married Snoop posted a meme on his Twitter account showing Drake holding a RedHot bottle of pepper sauce.

Of course, there is no doubt the meme is about Drake as he is seen standing with his best sexy face pout holding the hot sauce bottle.

Snoop isn’t the only one that’s taken a jab at Drake. Popcaan also reacted to Drake’s most recent photo where the Canadian rapper is dapper in a leather shirt.

“Who that? The gal them hot sauce,” Popcaan commented with laughing emojis. 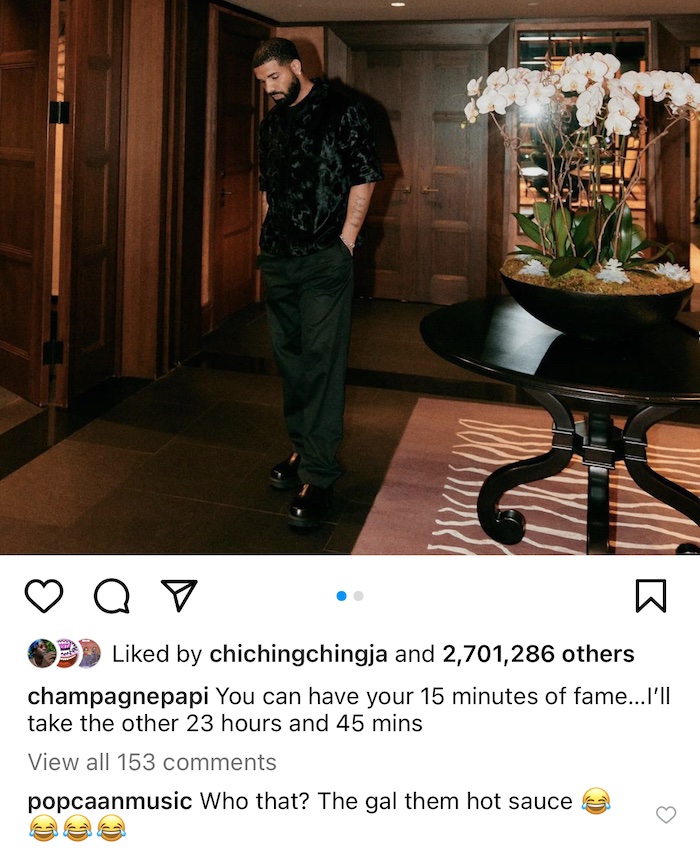 Drake has not directly addressed the rumors, but his latest photo caption has caused fans to speculate that he has taken note of the news.

“You can have your 15 minutes of fame…I’ll take the other 23 hours and 45 mins,” the rapper captioned his latest post on Instagram a day after news of the peppery saga surfaced.