Police Killings of Blacks: Here Is What the Data Say 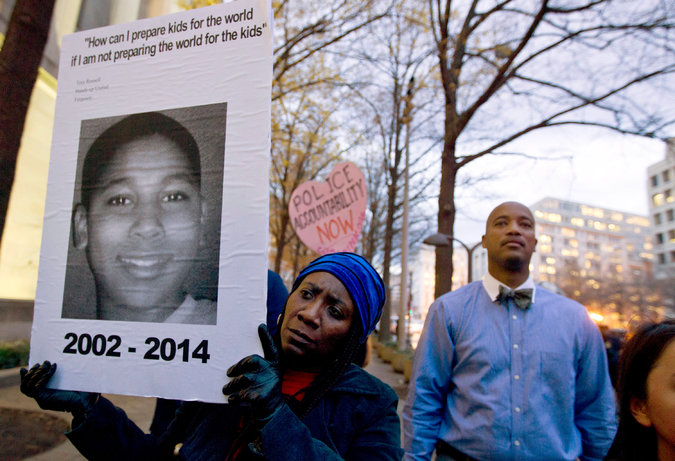 Tomiko Shine holding up a picture of Tamir Rice, the 12-year-old boy fatally shot last year by a  police officer in Cleveland, in a protest march. CreditJose Luis Magana/Associated Press

Tamir Rice. Eric Garner. Walter Scott. Michael Brown. Each killing raises a disturbing question: Would any of these people have been killed by police officers if they had been white?

I have no special insight into the psychology of police officers or into the complicated forensics involved in such cases. Answering this question in any single situation can be difficult and divisive. Two outside experts this monthconcluded, for example, that the shooting of Tamir Rice, a 12-year-old boy in Cleveland who was carrying a toy gun, was a “reasonable” if tragic response. That will hardly be the last word on the subject.

I’m not saying that the police in these specific cases are free of racial bias. I can’t answer that question. But what the data does suggest is that eliminating the biases of all police officers would do little to materially reduce the total number of African-American killings. Police bias may well be a significant problem, but in accounting for why some of these encounters turn into killings, it is swamped by other, bigger problems that plague our society, our economy and our criminal justice system.

To understand how this can be, let us start with the statistics on police killings. According to the F.B.I.’s Supplementary Homicide Report, 31.8 percent of people shot by the police were African-American, a proportion more than two and a half times the 13.2 percent of African-Americans in the general population. While this data may be imperfect, other sources in individual states or cities, such as in California or New York City, show very similar patterns.

The data is unequivocal. Police killings are a race problem: African-Americans are being killed disproportionately and by a wide margin. And police bias may be responsible. But this data does not prove that biased police officers are more likely to shoot blacks in any given encounter.

Instead, there is another possibility: It is simply that — for reasons that may well include police bias — African-Americans have a very large number of encounters with police officers. Every police encounter contains a risk: The officer might be poorly trained, might act with malice or simply make a mistake, and civilians might do something that is perceived as a threat. The omnipresence of guns exaggerates all these risks.

Such risks exist for people of any race — after all, many people killed by police officers were not black. But having more encounters with police officers, even with officers entirely free of racial bias, can create a greater risk of a fatal shooting.

Arrest data lets us measure this possibility. For the entire country, 28.9 percent of arrestees were African-American. This number is not very different from the 31.8 percent of police-shooting victims who were African-Americans. If police discrimination were a big factor in the actual killings, we would have expected a larger gap between the arrest rate and the police-killing rate.

This in turn suggests that removing police racial bias will have little effect on the killing rate. Suppose each arrest creates an equal risk of shooting for both African-Americans and whites. In that case, with the current arrest rate, 28.9 percent of all those killed by police officers would still be African-American. This is only slightly smaller than the 31.8 percent of killings we actually see, and it is much greater than the 13.2 percent level of African-Americans in the overall population.

If the major problem is then that African-Americans have so many more encounters with police, we must ask why. Of course, with this as well, police prejudice may be playing a role. After all, police officers decide whom to stop or arrest.

But this is too large a problem to pin on individual officers.

First, the police are at least in part guided by suspect descriptions. And the descriptions provided by victims already show a large racial gap: Nearly 30 percent of reported offenders were black. So if the police simply stopped suspects at a rate matching these descriptions, African-Americans would be encountering police at a rate close to both the arrest and the killing rates.

Second, the choice of where to police is mostly not up to individual officers. And police officers tend to be most active in poor neighborhoods, and African-Americans disproportionately live in poverty.

In fact, the deeper you look, the more it appears that the race problem revealed by the statistics reflects a larger problem: the structure of our society, our laws and policies.

Laws and policies need not explicitly discriminate to effectively discriminate. As Anatole France wrote centuries ago, “In its majestic equality, the law forbids rich and poor alike to sleep under bridges, beg in the streets and steal loaves of bread.”

This is not just about drugs or law enforcement. Poverty plays an essential role in all of this. Jens Ludwig, an economist at the University of Chicago who also directs the Crime Lab there, points out: “Living in a high-poverty neighborhood increases risk of violent-crime involvement, and in the most poor neighborhoods of the country, fully four out of five residents are black or Hispanic.”

We will not sharply reduce police killings of African-Americans unless we understand the social institutions that intimately tie race and crime. In her book, “The New Jim Crow: Mass Incarceration in the Age of Colorblindness,” Michelle Alexander argues that the American criminal justice system itself is an instrument of racial oppression. “Mass incarceration operates as a tightly networked system of laws, policies, customs and institutions that operate collectively to ensure the subordinate status of a group defined largely by race,” she says.

Individual police officers did not set these economic policies that limited opportunities or create the harsh sentencing policies that turn minor crimes into lifetime sentences.

We should eliminate police prejudice because it is wrong and because it undermines our democracy. It blights — and all too often destroys — lives.

But there are also structural problems underpinning these killings. We are all responsible for those.