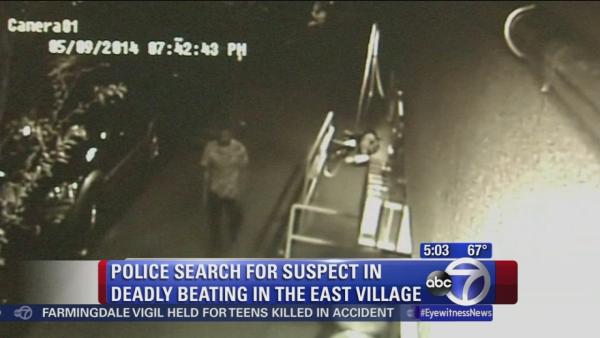 Crime Stoppers is offering a $2,000 reward for information leading to an arrest and conviction in a deadly attack in the East Village.

Ruan Wen Hui, 68, was walking on East 6th Street off Avenue D around 9 p.m. Friday when he was brutally beaten, police said.

Surveillance video of the incident shows the suspect approaching Hui and yelling at him before throwing him against a wall, CBS 2′s Andrea Grymes reported. The suspect then punched and kicked Hui in the head before walking away, police said.

As WCBS 880′s Peter Haskell reported, a police spokesman said they believe they know the name of the suspect.

In the video, a few people pass Hui after the beating, and about six minutes go by before someone bends down in front of him, Grymes reported. Then police arrive.

Hui was taken to Bellevue Hospital, where he died of his injuries the next day.

Police are looking for a man wanted in connection with a deadly beat in the East Village. (Credit: NYPD)

Neighbors were shocked to hear about the attack.

“The guy didn’t even take money or anything. It was just stupid violence,” one man said.

“It was senseless and it was stupid. It was just wrong,” East Village resident Alicia Mair said.

Hui was a married father of three grown daughters. They said their father, a Chinese immigrant, spoke no English. The retired garment factory worker had just dropped his grandchildren off at home when he was attacked.

His youngest daughter asked not to be identified, but said that her family is in shock over Hui’s violent death.

Ruan Wen Hui, 68, died of injuries that he suffered during a violent attack in the East Village. (Credit: CBS 2)

“I couldn’t believe that this happened to my father because my father is a very good man. He always helps people and he always smiles. Everybody thinks that he’s the best person in this world,” she said.

Hui’s family begged the suspect to turn himself in.

“If you have a good heart, you should show up and you should pay for this,” the victim’s daughter said.

“It anybody knows where is this man, please come forward and tell the police. We cannot wait to put him in jail,” the victim’s daughter, Michelle Ruan, said. “We are very sad to see him go.”

“If we talk about anything my dad, she upset, cry. She cannot believe it,” she said. “Catch this guy,and put him in jail. So no one else get hurt like my dad.”

While pictures of the attacker are not very clear, police said they are hoping someone will recognize the man and come forward, Slattery reported.

Anyone with information regarding this incident has been asked to contact Crime Stoppers at 1-800-577-TIPS [8477]. The public can also submit tips by logging onto the Crime Stoppers website at www.nypdcrimestoppers.com or by texting tips to 274637 [CRIMES] and entering TIP577.

Comment by Bombahdrop on May 13, 2014 at 11:56am
This is so wrong on so many levels. I can't help but to wonder if he had his grandkids would that have prevented the attack because he had small kids with him. Dam this is wrong. he ought to b ashamed of himself, killing a defenseless human being. I pray they catch this miserable demon before he do it again.

coco yu, are you on drugs ?  WTF you talking about.

I had been synovial very best dude to get a big event a season back again and the co-best dude and We cooked properly way Aqua 11s up a synovial presentation, using the couple of us all performing areas, but boosting each Carmine 6s other having feedback going back and forth. Everyone right now there mentioned it had been an incredible presentation and that this comedy has been comical. We opened using the tier 'The lick required a very best dude but wouldn't uncover you, and so your dog received a pair of a bit very good ones instead' - the item introduced the home down. AdviceThe most significant bit of suggestions for every very best dude isn't to get totally plastered just before dispensing a person's presentation - it isn't really significant, it isn't really wise and yes it actually isn't eye-catching - honest.

The initial big event We visited has been cringe-worthy because very best dude has been hammered and afterwards slurred his or her Infrared 23 11s means by just what exactly has been a not very good presentation, imagining your dog has been comical, ad-libbing survival mode humor. Sly recommendations in order to one-off functions associated with derring-do is likely to boost a snigger on the some folks concerned, but without having more closely justification the remainder of your audience should pass up this level totally.

Some of the greatest very best millions of people's speeches are usually rather limited, prop-orientated and crazy for a lot of existing. Sleeker this bride, be sure this lick can show his or her experience around public again and what ever you are doing, don't angry this grandpa and grandma. What ever takes place, don't imagine to get a second that you may Taxi 12s you should everyone and help to make anybody have a good laugh concurrently - simply just provided that everyone can feel who's resolved to go properly, then you can't require in excess of of which! Analysis, Analysis, Analysis - It can be information on Analysis A presentation uses loads of getting ready plus the more people that assist you to prepare, greater detailed a person's presentation results in being.