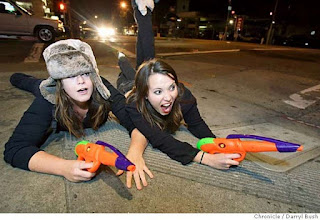 NH police, said the game poses a threat to public safety and has resulted in a rise in suspicious person calls. Neighbors are calling police to report 'suspicious activity'.

DHS's "See Something Say Something" program is out of control, it's created a nation of spies.

"Police departments nationwide have seen the consequences of teenag...

DHS must be thrilled, as schools encourage students to snitch on anyone caught playing "Assassins."

"Hunter College High School is warning seniors it could ban them from prom or graduation — or even snitch to college admission officers — if they're caught playing a popular toy-gun game in or near the school building."

"You should be aware that any students found playing the game within the school or in the immediate vicinity of the building will receive disciplinary consequences" Hunter College High School Principal Tony Fisher said.

In 2015 the dangerous "Assassins" game lasted for two weeks in San Francisco, where anyone could be a target!

The SF Gate reported, the only "safe zones" for participants are the city block in which they work, all public transit, hospitals and government buildings and inside bars (but not restaurants). So if you're walking down the street and someone charges by with a super soaker, you know why. 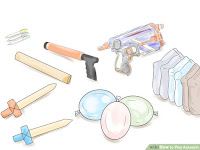 Let that sink in, people across the country are calling police to report kids with water balloons, super soakers etc.

Another example of government overreaction; school officials suspend a kindergartener for bringing a plastic bubble gun to school!

image credit: ABC7 NY
"They said it was a fake weapon, and that I needed to come get her,...