Pizza Delivery Boy 16, Savagely Raped A Sleeping Woman While Bringing A Pie To Her Neighbor 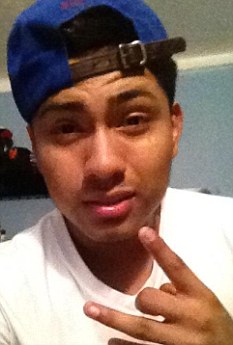 A 16-year-old pizza deliveryman was arrested in New York City Saturday after police said he brutally raped a woman while bringing a pie to a customer.

Cesar Lucas, who works for Sal's Pizza on 10th Avenue in Manhattan, delivered an order at around 12:30am to a tenth-floor apartment in a building near West 61st Street and Amsterdam Avenue.

According to police, after dropping off the pizza, the 16-year-old Bronx resident noticed that a neighbor's front door was slightly ajar.

Lucas broke into the apartment and sexually assaulted a woman who was sleeping in her bed, police said.

The victim managed to fight off the teenage assailant, who then fled the scene, investigators told the New York Post

Lucas was picked up by police at Sal's Pizza a short time later and charged with rape and burglary.

The woman was taken to Roosevelt Hospital, where she is listed in stable condition. Her name is not being released because she was the victim of an alleged rape. Part-timer: Lucas has been working as a deliveryman at Sal's Pizza on 10th Avenue on weekend nights for the past year Criminal past:  Lucas was arrested in August for allegedly breaking into a woman's home and stealing her purse

This was not the 16-year-old's first run-in with the law. According to officials, Lucas was arrested last month for breaking into a woman's apartment on West 42nd street while making a delivery.

Police found the stolen cards in Lucas' possession just hours later when the teen was stopped for jumping a turnstile at a Bronx subway station. Hunt: Police tracked down Lucas to Sal's Pizza and took him into custody after getting his description from the victim and her neighbor

He was charged with burglary, criminal possession of stolen credit cards and theft of service.

Lucas had worked at Sal's Pizza part-time on weekend nights for about a year, a co-worker told the Post, adding that the suspect is 'a good kid.'

"Good Kid." My ass! He is a frigging criminal!

AND YET THEY NEVER FIRED HIM AFTER THE FIRST ARREST.

Comment by damion nelson on October 1, 2012 at 4:59pm
She was probably expecting another visitor,just so happen he was there.These sick Manhattanites who go online seeking for sexual favors they pay for ,she's lucky she didn't handcuff herself to the bed

well he's going to prison.. so karma has the last laugh