VIDEO: Missy Elliot Ft. Pharrell Williams – WTF (Where They From)

Missy Elliot released her long awaited video for her Pharrell Williams-assisted single “WTF (Where They From).

It’s been over a decade since Missy Elliot released her last body of work and now fans are excited that she has decided to return to music.

The rap diva co-directed the video along woth Dave Meyers who also previously worked with her on “Lose Control” and “Work It.” The clip was shot in Los Angeles last month and showcase Missy wearing a shiny glass suit while dancing in an alley. She also bust a few moves on a hover board. Les Twins also made a cameo in the colorful video.

Missy Elliot is currently working on a new album with Timbaland. Pharrell Williams made it an all Virginia party during his time on the stage at the 2014 BET Awards on Sunday, June 29. The super producer brought out crowd favoriteMissy Elliot during his performance of "Come Get It Bae." 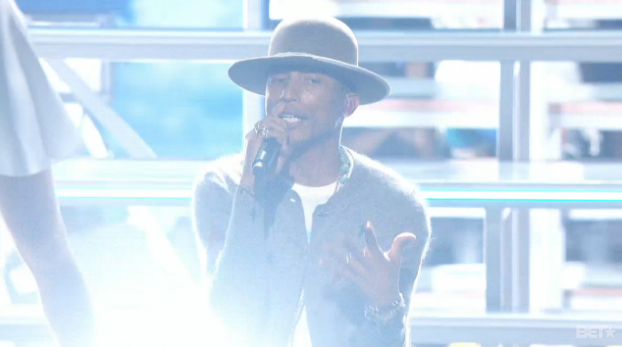 Love this but it took forever to open the cardigan lol

Comment by Amanda G on July 2, 2014 at 3:18am
Love Pharell he exemplifies what originality looks like. And how standing out on your own can be appreciated and pay-off at the end.

Comment by Conrad Ras Tafari on July 1, 2014 at 11:36pm
Why you so angry about some one wearing a hat. The person wearing a baseball or basketball cap is he a puppet on a string too. My guess is he is more of an idiot than Pharrell, wearing a cap advertising a team and promoting their brand free, might I add. now who really is the idiot?

Comment by Manuel Bizzle Jr. on July 1, 2014 at 4:03pm
Pharrell is Bafoonery @ it's best..Industry puppet on a damned string,dressed like a freaking garbage man ,in that stupid ass Smokey the Bear hat....He's a total embarrassment to every Black man in America....