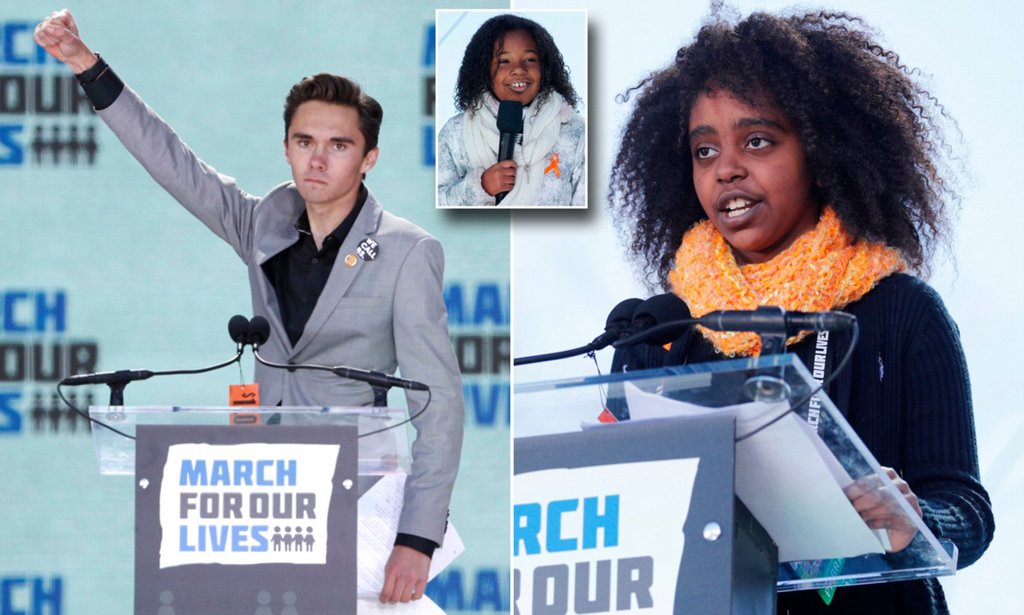 Hogg, 17, was among 20 young speakers at the event but was arguably the most recognizable thanks to his busy media schedule since the atrocity.
In an angry and metaphor-laden speech, he condemned the 'cold brass of corruption' which he said 'shackled' Washington DC.
'The winter is over. Change is here. The sun shines on a new day and the day is ours,' Hogg said.
He won roaring applause from the audience which shouted back at his comment 'not anymore' as he spoke of gun violence and politicians in power who are 'shaking'. David Hogg, 17, finishes his speech at the March For Our Lives event on Saturday in Washington DC Hogg denounced the 'shackles of corruption' and said: 'Winter is over. The sun shines on a new day and the day is ours'

Hogg finished his speech on an official note, saying: 'Thank you I love you all. God bless you and God bless America.'

He won over some fans, with one internet user asking whether or not he was old enough to become president.

But it was 11-year-old Naomi Wadler from Alexandria, Virginia, who impressed the most with her soft-spoken eloquence.

In a speech dedicated to ending the disproportionate rate of gun deaths among African American women, Naomi quoted Toni Morrison to say: 'If there's a book you really want to read, but it hasn't been written yet, then you must write it.

'Honor the girls, the women of color whose stories have not been told.' Naomi Wadler, 11, is from Virginia, Alexander. She gave an uplifting speech about her hopes to reduce the disproportionate rate of gun violence deaths among African American women 'We also know that we stand in the shadow of the Capitol, and we know that we have 7 short years until we too have the right to vote.'

Her words set Twitter alight with praise and hopes of a future presidential run.

She gave an infectious and brief speech where she called on the crowd to recite her words back to her.

Invoking her grandfather's immortal words, she said with a beaming smile: 'I have a dream that enough is enough.

'And that this should be a gun free world, period.

'Spread the word! Let it be heard, all across the nation!

Thousands of protesters fill DC streets at March for Our Lives

'We are going to be a great generation!'

She later went on CNN and said she was 'nervous' about the speech but settled in to it.

'Well I was really nervous. My heart was like beating like boom boom boom and it just got faster and faster but then I got used to the crowd. Then I was like,  "oh it's not that bad."

'I think one of the things I want to help is that there to be no guns in this world, not just at schools, just everywhere.

'We have to do all this lockdown drills [at school] because people have guns,' she said.

'He'd be amazed that all these people were getting together. A few days ago I had a dream about him.' Yolanda's cheeriness was infectious. She told the audience that she, like her grandfather, had a 'dream' for a gun-free world
MLK’s granddaughter takes stage at March for Our Lives in DC

Hogg's speech was less cheery. He spoke of the 96 people who die every day across the country from gun violence and took multiple swipes at politicians.

'If you listen real close you can hear the people in power shaking. They've gotten used to being protective of their position. Through the safety of inaction.

'Inaction is no longer safe. To that, we say, no more!'

Hogg spoke of making gun violence a 'voting issue' which will lead the primary elections.

'We are going to take this to every election to every state and every city. We are going to make sure the best people get into run, not as politicians but as Americans,' he fumed.

Pointing to the Capitol, he added: 'This... is not cutting it'. 'They will try to separate us in religion, class, congressional demographics. They will fail.

'We will come together. Let's put the USA over the NRA. This is the siren of Spring and the blossoming of our democracy,' he said.

mi jus wonda who funds all that great A/V stuff?  40' stages, backdrops, projection systems and what not...